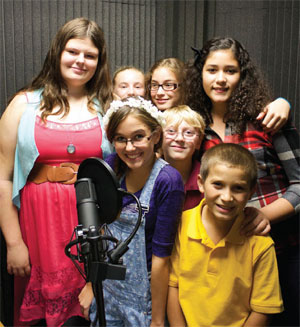 Bluffton has its own stage for promising recording artists of the future at the Boys & Girls Club of Bluffton, which recently unveiled its new hi-tech recording studio.

The studio features two sections, one a large green and orange room loaded with Apple Macs and a keyboard synthesizer. The adjacent room, about 5-by-8 feet, is fully soundproofed and features overhead microphones and equipment for professionalquality vocal recordings.

“A lot of the kids are selftaught,” said Keisha Glover, assistant club director who heads the “tweens” program at the club. “On a weekly basis we have 30 to 40 kids using the studio.”

The Boys & Girls Club held the grand opening of its studio earlier this year at the club’s teen center.

The event began with a “Bluffton’s Got Talent” contest, which was judged by two local musicians and an active club parent.

The club started development of the audio studio in 2012. Unit director Molly Smith and teen director Jaala Smith knew the teens they served shared a love of music and presented the idea to the club’s board of directors. 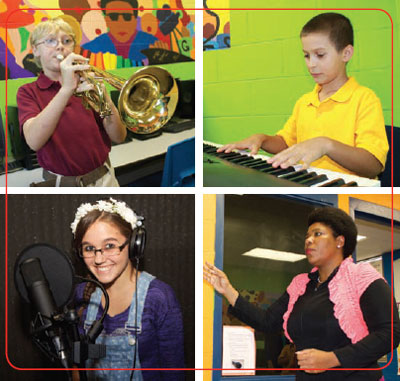 In May, the club received donations from the Sam Ginn Family Foundation, Calhoun Station and Berkeley Hall that enabled it to begin transforming a storage closet into a hightech audio studio for its teen members.

The studio has a soundproof recording room and computer equipment for recording, mixing and editing music.

One of the popular recording units is a large keyboard and synthesizer, complete with a huge flat screen monitor.

The installation of the unit was finished in August and since then the teens have received training on the equipment.

“This studio is a nice setup and gives kids a chance to show a lot of talent, ‘’ said OJ Driessen, aka, DJ Oj, a volunteer who helps the teens with recording engineering. “It’s nice for them to come here and start early to learn about recording.

“Hopefully they’ll put together a project for the whole club,” said Driessen, who has nearly 15 years experience as a DJ in Atlanta.

One of the regulars at the recording studio is Alexandria Golden, 17.

“I really have fun here,” said Golden, a Bluffton High School student. ”I sing all the time and love to play rhythm and blues.’’

In addition to working in the Boys & Girls Club recording studio, Golden also sings in her church choir.

She said she really enjoys working in the studio.

“It really gives me an opportunity to use hightech equipment, ‘’ she said. “I’m working with a friend on a special recording and hope to develop something we can get on the air to be widely heard.’’