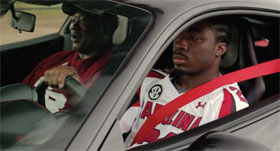 If you’re a fan of the University of South Carolina Gamecocks, there is a good chance you’ve already seen the “Ride for My Team (Forever to Thee)” fan video that has gone viral on the Internet. As of Sept. 17, the video had been played 111,476 times on YouTube, just 28 days after it was posted to the site by creators Dynobrite Productions.

Country music star Darius Rucker, Miss South Carolina 2013 Brooke Mosteller, San Francisco 49ers running back Marcus Lattimore and former USC star George Rogers are all featured in the music video along with players from every era of Gamecock football. The music is done by a collection of Columbia-based rappers.

One of the two men behind the creation of the video is Hilton Head Island native Fabio Frey, a 2011 USC graduate who now lives in Columbia. He met Greer native Joey Thompson in college and the two formed Dinobrite Productions in 2008. The duo also created the wildly popular “Rock Out (With Your Gamecock Out)” music video that has amassed more than 300,000 views since its release in November of 2010. Both songs are featured on “The Gamecock Mixtape,” which can be found at www.carolinamixtape.com.