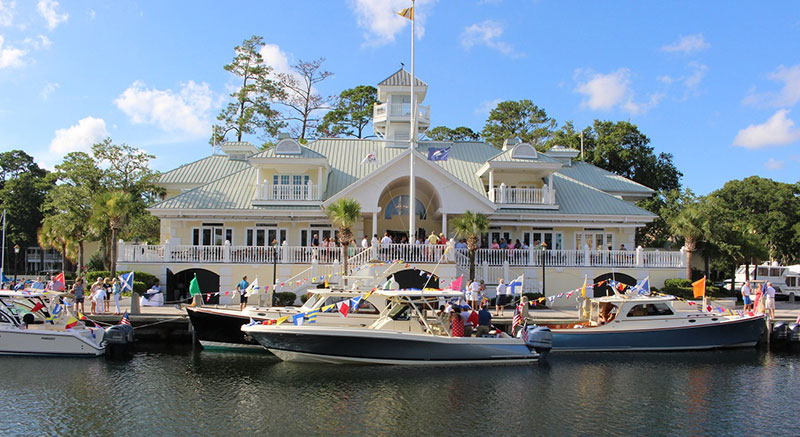 As a globetrotting broadcaster and sailing commentator for the America’s Cup, Tucker Thompson has seen hundreds of boat clubs and yacht clubs.

So, when it came time last year to have his family of four join a club, which did he choose?

“The South Carolina Yacht Club … It’s perfect,” says Thompson, who divides his time between a Florida home and the Hilton Head club at picturesque Windmill Harbour.

Like many of the 600 or so members of the club, Thompson is charmed by the attention to details that make the club captivating, warm and welcoming.

His interest in the club was immediate when he visited in 2016, prompting him to send photos to his wife about “this special place.”

Fast forward to this summer. The Thompson family can be found at the SCYC, where a teenage son is enjoying golf camp and a pre-teen daughter is learning to sail.

It’s all a result of a vision put in motion more than three decades ago by James N. “JR” Richardson Jr. and his wife, Leslie. The club opened July 1, 1989, after Richardson and a partner bought Windmill Harbour.

For the Richardsons, creating and nurturing the SCYC has been a labor of love, with JR conducting what amounts to a master class in sweating the details to deliver a successful outcome.

Determined to establish a club with a name that paid tribute to the state he loves, Richardson teamed up with designer and longtime friend Florence “Dottie” Hawkins to bring visual history and meaning to the South Carolina Yacht Club.

From floor to ceiling, JR personally reviewed and approved everything from artwork to colors to furniture. Working with Hawkins, he sorted through scores of red swatches to select the best color for foyer rugs. Ultimately, he had a rug designed to represent the vegetation and marine life of the surrounding area.

The club’s “Catesby Room” was named in honor of noted English naturalist and illustrator Mark Catesby, whose hand-colored fish renderings celebrate fish of the Carolinas.

A relentless pursuit of unique and relevant items led JR to sit in hundreds of chairs and barstools “until he selected just the exact right chair,” said Leslie. JR’s creative nature kicked in on a visit to a Florida art shop, where he spotted and acquired a bluefish for the club’s Bluefish Lounge.

For more than three decades the Richardsons have put their passion for precision into the club’s development and programs. Starting with a glittering opening night for 700 guests in 1989, the club has earned a reputation for what JR describes as a “safe harbour” for members and guests.

“The club today has something for everyone,” says Leslie.

Among the many offerings: a wine society, bridge groups, book clubs, Cotillion classes for youngsters, tennis and pickle ball. The club’s elite junior sailing team includes a junior sailor who was runner-up in world championship competition. Several other team members are nationally ranked.

Holidays and special events have become traditions valued by members, old and new.

“The club has been a sanctuary for souls,” said Marc Puntereri, a charter member. “What makes the difference is the uncommon commitment of JR and Leslie and their infectious leadership.”

The club has attracted members from 28 states and an array of nationalities, including Italian, German, Swedish, English, French and Russian. In addition, the club has reciprocity agreements with some 700 clubs worldwide.

And the SCYC recently completed a “refresh” that retains the club’s beauty and casual elegance.