Tom Davis has a top priority for state lawmakers preparing to divvy up billions of dollars in federal infrastructure money: Put Lowcountry concerns high on the To-Do List.

The Beaufort-based senator who represents District 46 is sharing his shopping list with fellow lawmakers, who are in the midst of the give-and-take to determine spending on projects for land, sea and air.

In the days and weeks ahead, the South Carolina General Assembly will decide how to spend the state’s share — $6.11 billion — of some $550 billion in infrastructure funds approved by Congress in November.

The bottom line for Davis: spending “wisely” and “fairly” to meet the needs and goals for Beaufort and Jasper counties.

Strategic spending could improve the quality of life in the Lowcountry while fueling economic development, said Davis, who was a senior policy advisor and co-chief of staff during the administration of Gov. Mark Sanford. 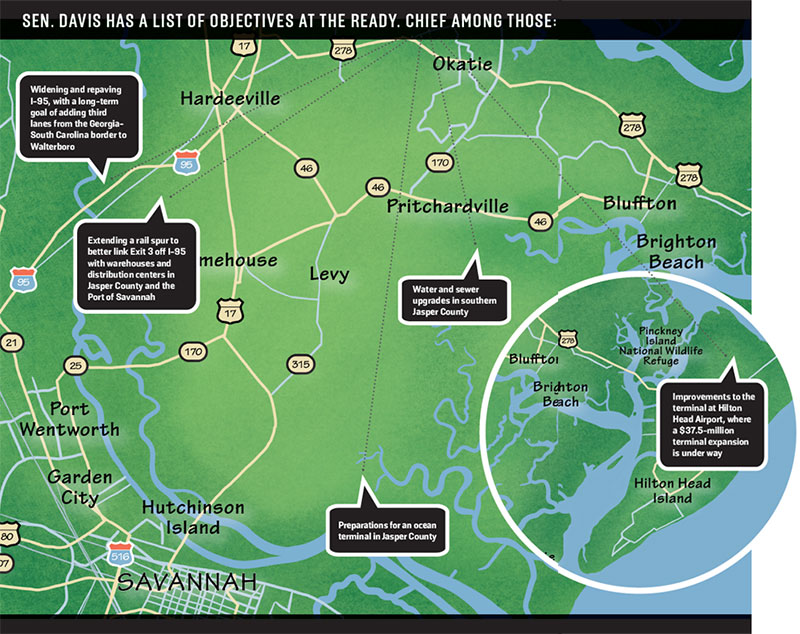 A majority of South Carolina’s money is expected to be aimed at road and bridge repairs. The state has more than 1,700 bridges needing attention and some 7,300 highway miles with much-needed improvements, officials said. An existing state Department of Transportation plan will shape much of that spending.

Davis said a spending plan to be developed by the General Assembly must work within guidelines covering federal dollars targeted for the Palmetto State. Those include:

Davis said strategic spending of federal dollars could accelerate and solidify an expanding base of shipping, transportation, logistics and warehousing that embraces I-95, southern Jasper County and the Port of Savannah.

Included in the vision is a proposed port in Jasper County to serve the increasingly complex world of international shipping.

Supply-chain problems aggravated by the COVID pandemic have idled hundreds of container ships offshore, where they wait for choked ports to clear.

The backlog strained the Port of Savannah, which set record cargo volume records for 16 consecutive months. Nonstop demand prompted port authorities to build additional dock space and a yard to serve giant container ships from around the world.

Davis is familiar and enthusiastic about the potential for a Jasper port and suggests fresh federal money could help move things along. While with the governor’s administration he led successful talks with the state of Georgia to co-develop a port on the Savannah River in Jasper.

Whatever the General Assembly decides (the legislative session began in January and adjourns May 12), Davis said infrastructure decisions should be balanced with programs to preserve the culture, lifestyle and environmental qualities of the Lowcountry.

“There is a flip side to economic growth,” he said. “Open space and green space are important as well.

“We want to preserve the very things that brought so many of us down to this area in the first place. We can have both: economic growth and protection of our fragile ecosystem.”