What began as a typical morning at Hilton Head Plantation on Sept. 2 for 5-foot tall, 80 years young Ellie Kyle ended up in a fight for her life.

Kyle was walking Lulu, her chihuahua-dachshund rescue dog, which she does each morning.

“All of the sudden I look over, and an 8-foot alligator grabbed my legs and pulled me back in the water,” she said.

Kyle, who was walking beside a lagoon near Rookery Way only 50 feet from her back door, said she could hear her legs break.

Mary Montour and her husband Layne Carver have been Kyle’s neighbors for almost two years. 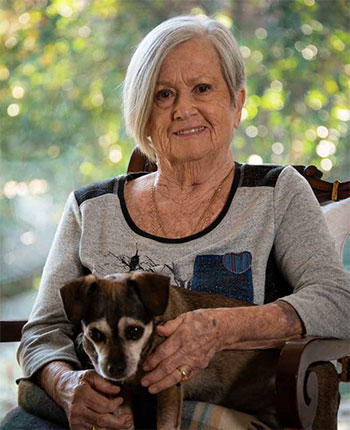 Mary was in her kitchen when she heard Kyle scream. She ran outside thinking Kyle may have fallen down. Instead, she found her neighbor struggling to survive.

“I see her, I thought she fell in, but as I’m pulling her, she started screaming, ‘An alligator is biting my leg off,’ ” said Montour, who grabbed Kyle’s hand and attempted to pull her to safety. “She was in extreme distress.”

Carver heard his wife’s call for help. He grabbed a shovel that was mounted on a wall in the garage and raced to the scene.

The alligator had Kyle in a death roll.

“It had her pretty good,” Carver said. “I hit the alligator as hard as I could with a shovel.”

Carver hit the alligator three times before Kyle was able to be freed. Due to the shock of the attack, Kyle does not remember much else but the feeling of pure adrenaline and thinking, “I heard you’re supposed to look for something soft, so I stuck my finger in his eye, which I think worked.”

Montour and Carver said their only focus was to save Kyle.

“We just reacted,” Montour said. “We are so grateful we were able to save her.”

S.C. Department of Natural Resources removed and euthanized the alligator. The dog was not harmed.

According to Deputy Chief/Fire Marshal/PIO Joheida Fister, “Most alligator problems occur between March and July, which is the breeding season, and they are most active between dusk and dawn.”

It’s uncertain what provoked the attack, but Fister said it is important not to feed alligators.

“When fed, alligators overcome their natural wariness and learn to associate people with food, and it also alters their natural diet in an unhealthy way,” she said.

In South Carolina, it is illegal to feed alligators or entice them with food. If convicted, you may face a $200 fine and up to 30 days in prison.

Kyle said she “loves” alligators and they deserve to live in the lagoons, but she is concerned about alligators being fed.

“Once an alligator associates humans with food, they can’t tell the difference between your leg and a hot dog,” she said.

In the weeks since the attack, with the help of family members she “doesn’t know what she would do without,” Kyle is recovering from her extensive injuries.

“The orthopedic surgeon thought he might have to remove my legs but said I was an 80-year-old miracle,” she said.

During the time of her interview, Kyle, who has lived on Hilton Head Island for 28 years, was dependent on using a walker and someone needed to be near her to steady her. She is cared for by her daughter, Maria, who assists with everyday needs, including cooking meals.

Kyle said, “Not sure how well I’m ever going to walk again because of the nerve damage to my right foot. I’ll probably never drive a car again if that doesn’t get better.”

The incident is also preventing her from doing the things she enjoys most like world travel, gardening and playing golf.

Not one to let things get her too down, though, at the end of Kyle’s interview she put on an alligator foot necklace and said, “They call me Ellie-gator now.”

Here are some tips to be safe around alligators: