CATCHING UP ON INITIATIVES FOR HILTON HEAD AND BLUFFTON

The Lowcountry is thriving with ever-evolving projects. Here is a look at three initiatives that are underway:

Take a ride to the intersection of William Hilton Parkway, Dillon Road and Union Cemetery Road, and what do you see?

An abandoned golf course, a small parking lot and a lot of unused land.

Hilton Head leaders, town staffers and diverse interest groups see more than that. They visualize a tantalizing opportunity to create a first-class park to enhance the mid-island area and benefit a variety of community interests.

They are fixed on transforming the 103-acre vacant tract owned by the town since 2013. Much of the property previously was operated as the Port Royal Planters Row Golf Course. 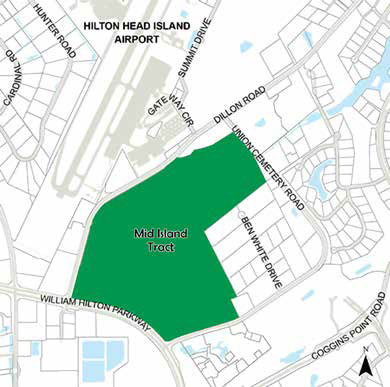 Some two years of research and discussion are about to intensify as the town has added MKSK, a national consulting firm, to focus an emerging vision of what the park will feature. When completed, the area will be one of the largest parks on the island.

There is no shortage of ideas. Suggestions for the park include walking paths, bird-watching, disc golf, multi-purpose athletic fields, ecological areas, gathering spaces and pavilions, playgrounds and historic designations.

The “mid-island park” is a key piece of the town’s strategy for invigorating and strengthening the mid-island area.

Establishing the park is expected to offset overuse concerns at other parks on the island, while serving as a catalyst to energize and add value to the mid-island area. Among the neighbors to the future park are the Port Royal Plantation, the Sea Turtle Marketplace, the Hampton Inn and Historic Grassland Gullah Cemetery.

Jennifer Ray, the town’s capital program manager and interim community development director, said the land available for a mid-island park is incomparable in Hilton Head and increasingly rare in the Southeast.

“It is going to be a really unique park,” she said, adding that consultants will seek additional input from the community and the town’s elected officials and staff.

Currently, the land is open to the public and is a popular spot for dog walking and bird watching. Much of the land — including more than a half-dozen lagoons — reflects the shape and contours of a former golf course, but there also are pristine, undisturbed areas.

At least 15 acres of the property have been untouched to preserve habitat for birds, wildlife and waterfront plant life.

Orlando said assessing the land is a painstaking process that calls for an appreciation for its habitat.

“You’ll see a stand of apparently dead trees and think they could be removed,” he explained. “Then you look closer, and find it is home to woodpeckers.”

Carlos Chacon, manager of natural history for the Coastal Discovery Museum and a field trip coordinator for the Hilton Head chapter of the Audubon Society, said the mid-island tract offers a lush blend of maritime forest, grassy areas and fresh water ponds.

Chacon said nearly 40 species of birds can be seen in the space, including the rare, red-headed woodpecker. The Audubon Field Guide says the bird was “once very common in eastern North America” but is now uncommon.

“The mid-island park would be a major new destination for birdwatchers on Hilton Head,” said Chacon. “’There is nothing like it.” 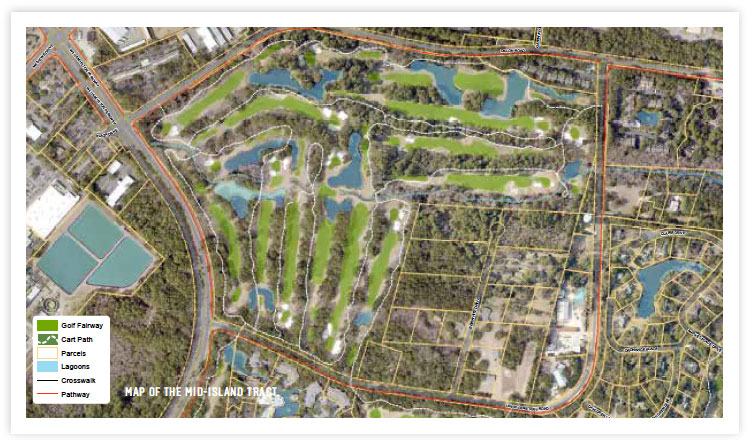 Lance Pyle, general manager of the neighboring Port Royal Plantation, said the park is an “exciting opportunity” for the island and for Port Royal’s 1,400 landowners. The key, he said, is to develop a plan that protects the property values and quality of life for Port Royal residents, while adding to the economic health and appeal of the mid-island area.

Overhead, traffic from the Hilton Head Airport generates fleeting noise. The airport is about a driver and three-wood away from of the property.

Ray said the timetable for development is taking shape, with a concept plan expected this fall and construction likely to begin in November 2022.

The Town of Bluffton is moving ahead with plans to create a large community gathering place in one of its fastest growing areas.

Phase one of New Riverside Park, situated at Highway 46 and New Riverside Road (S.C. 170), is on track to start construction in 2022 and be completed later that year, according to Pat Rooney, manager of the town’s Capital Improvement Program.

The first phase will have large open space, perimeter trails, parking, restrooms, and infrastructure to support the park, such as fencing and sewer, water and storm drainage. 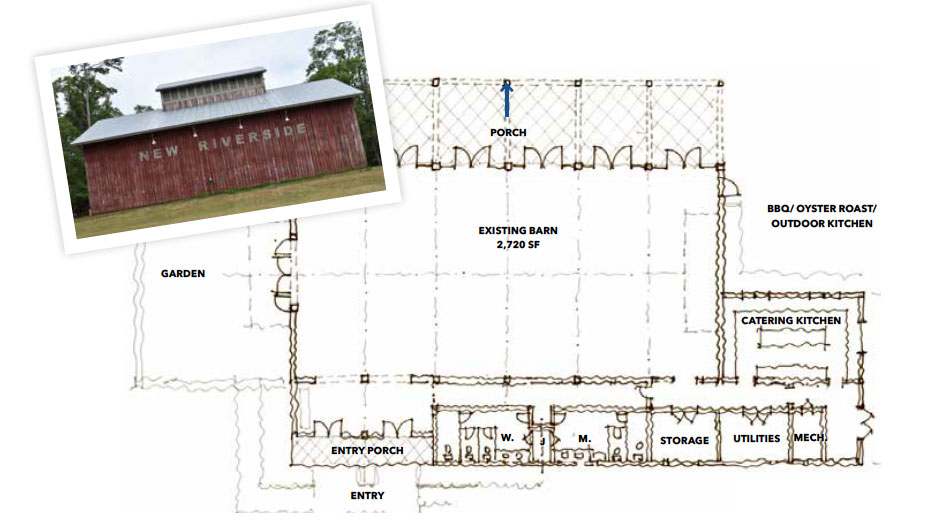 “The property is zoned as a passive park,” Rooney said. “The Town is restricted in terms of the usage of the park. It is never going to be a ball field-type of park. It is 37 acres, which I think is a significant piece of land, and it is located in one of the fastest growing areas of town.”

Bluffton wanted a park to serve that area, so it bought the 37-acre parcel from Palmetto Bluff developers in 2018, along with an adjacent seven acres. The 2,700-square-foot barn, visible from Highway 46, was included.

The barn has character and the potential to host private and public events, Rooney said. Just a shell, the barn was built in the mid-2000s as a billboard for the New Riverside development, he said. It needs extensive renovations to make it functional for year-round use, but the hope is to keep the existing rural architectural character, he said.

Along with trails wide enough for walkers and bikers, the park will eventually include a “significant nature-blending” playground. The town envisions the park as a place for large events, such as “evening under the stars,” car and craft shows. 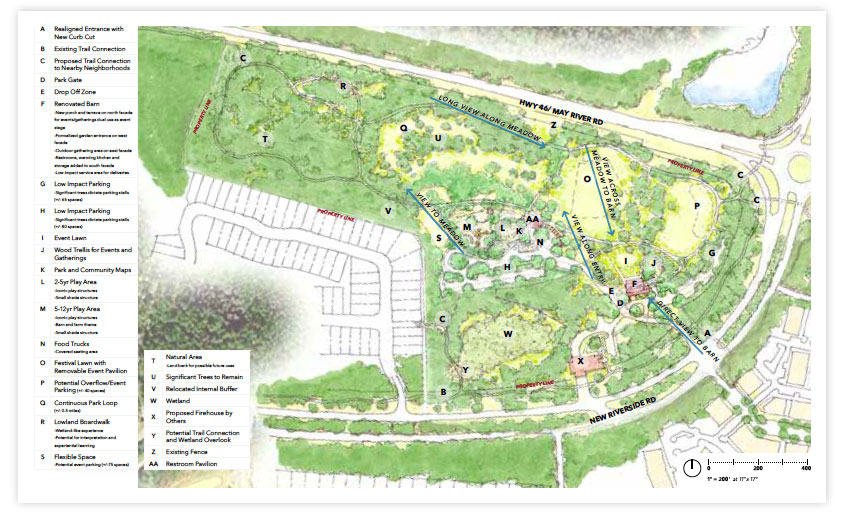 “Town Council has always emphasized parks and open space as an essential component to the community’s quality of life,” she said.

Bluffton is using the hospitality tax, tax incremental fund and grants to finance the park. Phase one will cost about $1.38 million. The total project, which will have up to four phases based on the allocated budget, is estimated at $11.1 million.

The town applied for a National Park Service grant through the Land and Water Resource Conservation Fund and is hoping to hear back by October whether it will get the $500,000 that will go toward the first phase.

“The town is hoping to get the park accessible and open to the general public so people can use the initial site amenities, but I assume additional facilities will be implemented in the multiple phases and built out over a number of years,” Rooney said. 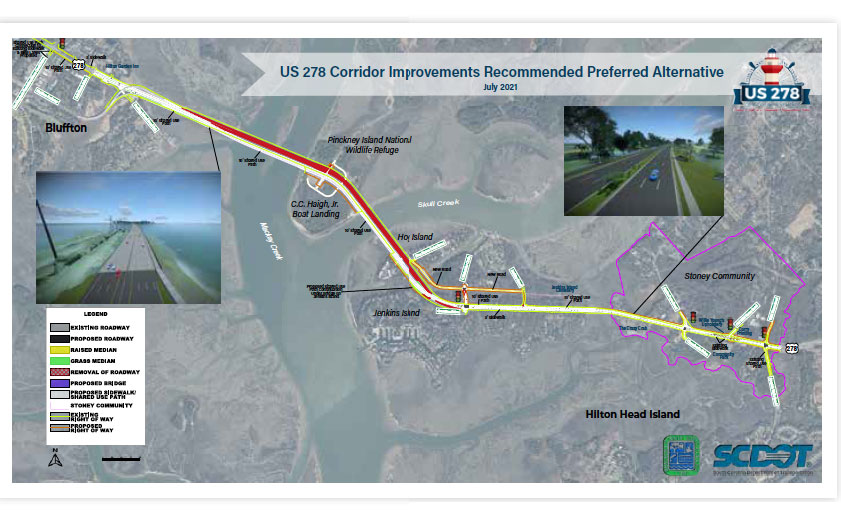 There would also be intersection changes on Jenkins Island and at Old Wild Horse on Hilton Head, and a traffic light added at the entrance of Windmill Harbor.

The plan also includes enhancements that highlight the historic Stoney community at Hilton Head’s entrance and other Gullah neighborhoods.

Hilton Head officials are not likely to formally respond to the SCDOT proposal until they have been able to review the public comments, said Shawn Colin, special advisor to the Town Manager.

In August, the town held community open houses where it unveiled preliminary local concepts that include key project “enhancements” that among other things would allow left turns at Squire Pope and Spanish Wells and leave Old Wild House as it is.

Much of the community concern centers around the proposed changes at Squire Pope and Spanish Well Roads. The roads feed traffic to north island communities.

“Either way, it is going to add more traffic to those areas,” said town council member Alex Brown, whose ward includes the area impacted by the proposal. “Particularly where Wild House intersects into Gumtree. They have a stop sign, but it (the intersection) is not designed to handle a lot of traffic.”

There is a need for a more critical look at alternatives, said Peter Kristian, general manager of Hilton Head Plantation and president of the board of the Jarvis Creek Club.

Those alternatives might have included grade-separated intersections and parallel secondary roads for more efficient turns off U.S. 278, he said. Also, there should have been other options besides a new traffic light for Windmill Harbor residents to safely access their community, he said.