Uber, the on-demand car-hailing service, operates in more than 450 cities around the world, including the Town of Hilton Head Island. Monthly “Ubered” for a week, interviewing local drivers. Here’s what we learned.

The next time you Uber, don’t be surprised if your neighbor rolls up to the curb in a polished Lexus or Mercedes with leather seats.

Amid an uneven recovery since the Great Recession, even local retirees have turned to on-demand business services like Uber for flexible job opportunities and additional income.

“Uber drivers are independent contractors. We work for ourselves, we’re not employees,” Jacobson said.

The San Francisco-based company launched in 2009 during the Great Recession when people needing extra income and riders wanting cheaper fares turned a start-up into a huge business. Uber’s current valuation is a colossal $68 billion on paper; it has $15 billion in real cash. A recent article by The New York Times predicted Uber will probably have an IPO in three to four years.

“I needed supplementary income beyond my retirement income and looked at part-time or minimum wage jobs, and driving for Uber was much more attractive,” Jacobson said. “The money is slightly better, but the flexibility is great. We work when we want to work. We just turn on the Uber app and we’re on duty.”

According to Uber, almost 25 percent of its drivers are older than 50. Novel technologies like Uber offer jobs that better suit the commitments and flexibility of a retiree lifestyle.

“I sing a lot with different chorale groups on the island and manage the Mary Green Men’s Chorale, and that requires about 10 hours a week,” Jacobson said. “Driving with Uber gets me the income I need with the flexibility of hours that I also need.”

Uber takes 20 percent of the fare and automatically deposits the remaining 80 percent into the driver’s bank account. Amounts can vary widely, depending on driving time and fares. During the summer peak season, Jacobson earns about $150 for working 12 hours a day.

“One of the things that I’ve done in addition to Uber is working with local organizations that help the elderly continue to live in place. I got a request last fall from a 92-year-old lady who lives in Hilton Head Plantation. She no longer drives. She had a minor stroke and needs some assistance living. Every Friday, I take her to get hair done, and Sundays I take her to church,” Jacobson said. “Uber enables her to remain mobile and live at home. I take another lady to dialysis. Another lady won’t drive at night. This is Uber, but it’s also about creating a relationship with the driver ahead of time.” 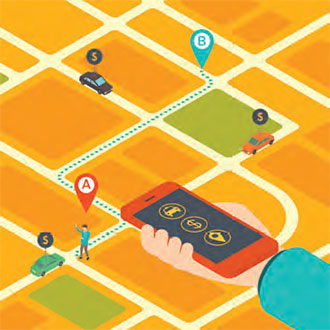 After a ride, both the driver and the customer rate their experience on a scale from one to five. Customers with low ratings are less likely to be picked up when they request a ride.

“As a driver, if you don’t maintain a very high-quality evaluation, Uber will drop you,” Jacobson said.

Rides are all-inclusive and cashless; one fare and one email receipt, automatically charged to your credit card, no scrambling for cash.

“Uber drivers must carry and pay for their own liability insurance,” Jacobson said. “Uber carries and pays for liability and high-deductible insurance that covers the driver and car from the time that the driver accepts a ride request until the driver uses the app to complete the ride. In other words, Uber covers the driver on the way to the pickup and during the ride.”

The company also requires background checks on all drivers — including driving records and federal, multi-state and county criminal background checks. New drivers have to supply an active driver’s license and proof of car registration and insurance. Drivers pay for gas and car maintenance.

Uber is a technology-based service, and technology is never perfect. If the driver’s GPS map is down, he or she may have trouble navigating.

“But we are able to respond quicker than a cab. You can track us as we arrive and depart your location stop. You can contact us either by text message or telephone. Most drivers call their passengers to confirm their location,” Jacobson said. “And there’s a safety aspect — besides my contact info, there’s a picture of my license plate number and me on the app.”

Perhaps one the biggest benefits of being an Uber driver is the adventure.

“During the RBC Heritage,” Jacobson said, “I spent most of the week shuttling a wealthy businessman and hisfamily, friends and business associates betweenhis private plane, a King Air turboprop, and his 51-foot Hatteras yacht docked at Harbour Town. It was fun.”