Rethinking one of America’s most cherished ideals

Almost anywhere in the world, when someone mentions McDonald’s people instantly think of hamburgers, standardized food options, and a reliable quality of service. By any measure, this reflects brilliant marketing by the McDonald’s corporation. However, professor Jack Whelan has turned this McDonald’s phenomenon into a social critique, a metaphor for the way many Americans think. 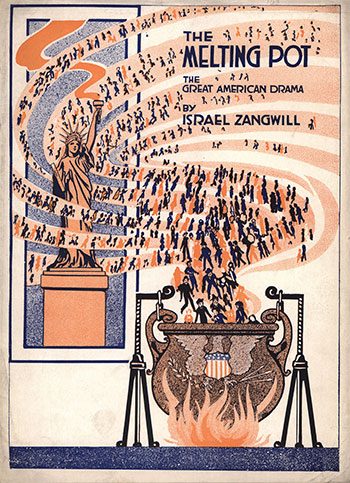 According to Whelan, many of us have developed what he calls a “McDonald’s mindset” because, as a country, we practically worship uniformity, sameness and predictability. Some might argue that this is OK because it makes us feel comfortable and safe — presumably, we feel that the “known,” or the expected, is better than the “unknown,” or the unexpected, whether we are dealing with hamburgers or people. You may be asking yourself: What does any of this have to do with the idea of America as a melting pot? The answer is that in a sense, the “McDonald’s mindset,” which validates and values standardization, is distantly related to the assimilationist mindset that is embodied in the melting pot ideal. Since 1908, the melting pot has symbolized American unity. Both the ideal and the symbol are deeply embedded in the American psyche, and continue to resonate in today’s culture. Unfortunately, this utopian ideal that ostensibly promises national unity is actually disunifying. And not only is it very complex, it masks a sinister underside.

The concept of the melting pot isn’t even an American idea. Its history dates back to an 18th century French aristocrat, J. Hector St. John de Crèvecoeur, who was trying to describe an “American” to his European counterparts in his 1782 “Letters from an American Farmer.” Crèvecoeur was trying to capture and define the unique American character, which was not quite European and was something new and different. When he asked, “What then is the American, this new man?,” he concluded that “Americans” are a “strange mixture” of nationalities. They are individuals from a variety of nations “melted into a new race of men,” and their “labors and posterity will one day cause changes in the world.”

Crèvecoeur’s letters are somewhat prophetic, and became the basis for three important ideas that Americans continue to embrace: that Americans are a unique blend in the world; that America is a unique and world-changing country; and that to become truly American, you must “melt” or blend in. It wasn’t until 1908 that a British playwright, Israel Zangwill, updated and romanticized the idea of America as a melting pot in his play, “The Melting Pot.” The cover of the playbill graphically illustrated the theme, depicting the Statue of Liberty beside a giant cauldron, which sat upon a blazing fire. Different shades of people (all European) were lined up to jump into the pot.

On the surface, the ideal seems simple, benign and appealing, but is it consistent with America’s valorization of individual rights and individualism? For example, does it challenge our belief in free speech or freedom of religion, or the simple right to be? On some level, doesn’t the melting pot idea disturbingly equate becoming an American with self-destruction, loss and pain? If we figuratively jump into a pot, doesn’t this mean stripping ourselves of all that makes us distinct? Doesn’t it mean becoming an amalgamation, a distillation of myriad ideas and values, and beliefs and cultural traditions? Can we do this, and still maintain our uniqueness as individuals and cultural groups? And on some level, doesn’t this undermine the concept of individualism?

These questions force us to think about how Americans think about diversity. They also force us to think about power. Who has it and who does not, because if we extend the metaphor a bit further, we realize that even though the melting pot idea is a construct, the assumption must be that there are some who have the power to control the melting process. Someone has the power to make decisions about who gets into the pot and who does not, and what those who come out of the pot should look like and be like. In other words, someone is setting the standards.  Given the socio-economic realities of American history, this introduces the subjects of race and gender because historically, in America, those who wielded power were white, male and Anglo-Saxon, and they controlled what an “American” should look and be like. However, over time, attitudes changed, demographics changed, power shifted, standards evolved, and how we think about America — and Americans — has constantly been renewed. As a result, how we think about America’s melting pothas also changed.

Some have argued that the melting pot idea had to change because it established an unrealistic culture-stripping, cookie-cutter version of how a true American should look, think, speak and act, and established a Euro-centric gold standard that elevated those who were white, male, English-speaking Christians. Others believe that the melting pot idea was too narrow and too superficial because it did not balance a respect for human diversity and group identity with the nation’s need for the unity that comes from commonly held beliefs and values and goals; from assimilation.

Today, we live in a social environment that has begun to acknowledge and honor multiculturalism and to affirm differences in all forms. And we have found new more inclusive metaphors to replace the melting pot. Now we’ve begun to think of America as a salad bowl, a patchwork quilt or an ethnic stew to show that things that are different can maintain their identities while still working together to create something good. This means that as a society, we can maintain our individual and group differences as well as speak with one American voice in support of the uniquely American ideals of freedom, justice, equality and human dignity.

Dr. Gloria Holmes is a professor emeritus at the School of Education at Quinnipiac University in Hamden, Connecticut. Committed to promoting cultural literacy in schools and communities, she has worked as a diversity trainer for the Anti-Defamation League and has conducted anti-bias workshops for the Connecticut State Department of Education. Holmes is presently writing a book on school leadership and social justice, due to be published this year.