LOVE, RESPECT AND THE ART OF MARRIAGE

They met their first week as undergrads at Duke University. He was an engineering major and she was pursuing a career in nursing, and both were smitten from the start.

That was 46 years ago, but both Shirley and Joe Newton can tell you what they were wearing the day they met.They’ve learned a thing or two about what makes for a successful relationship and they’re not shy about sharing what they’ve gleaned along the way.

In some ways, relationships are the family business.Shirley Newtown is related to famed psychologist Dr. Phil, and both she and her husband have worked closely with Dr. Phil as trainers and facilitators for his personal growth seminar series. 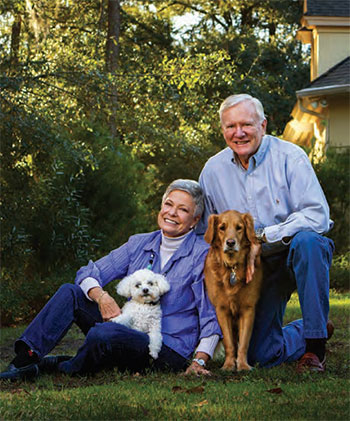 The Lowcountry couple has a passion for helping others make their marriages the best that they can be. The pair lead small groups dedicated to maximizing relationships through their church, Hilton Head Island Community Church.

So what’s the secret to a long-lasting, healthy marriage? Both say it’s about the basics and bringing your best self to the relationship.

“It sounds cliché, but it’s true that you have to love and accept yourself so you can love and accept others,” Joe Newton. “You’ve got to recognize and identify your own baggage that you bring into the relationship.”

The Newtons credit their intense training with Dr. Phil for helping them see their own issues early in their relationship, which they say has helped them tremendously along the way.

Shirley Newton says that as the daughter of a successful surgeon, perfectionism was something she learned at an early age. It's something she identified in her training and a trait that no longer holds sway in her life.

“You have to look at your past and how it’s shaped you,” she says. “It helps you understand why you do what you do. It also helps your spouse understand those things about you as well.”

Her husband says the important thing he learned from working with Dr. Phil is truly what matters. “Until then, achievement was what I was all about,” he says. “Getting my degree from Duke, my graduate degree from Wharton, it was all about the next accomplishment. I learned that what matters more than anything else is relationships, and that was a game-changer for me.”

Both point to their faith as their source of strength and guidance, which is why they’ve chosen to share what makes for a strong marriage. “We have a passion for marriages, and we’ve learned so much that we wanted to pass it along,” Shirley Newton says.

They’re quick to point out when it comes to a strong marriage, it’s not complicated, but it’s not easy, either. Great relationships take work, andyou can always fine-tune your marriage and make it better.

Just how simple is it? It boils down to two words: love and respect. The Newtons base their weekly small groups for couples on the book “Love & Respect” by Dr. Emerson Eggerich, and feel it’s the key to what works.

Joe Newton says one of the most common misperceptions about marriage is that your role is to be emotionally responsible for the other. “It’s not your job to make your spouse happy, it’s your job to love them,” he says.

Not surprisingly, both note that the No. 1 issue in any relationship comes down to communication. “We’re wired differently as men and women, and we can’t expect our spouses to always see things our way,” Shirley Newton says.

In their small groups for couples, the Newtons do a very powerful exercise. Couples face each other with their hands behind their backs.On the count of three, they each rate their relationships, on a scale of one to 10. “It’s a pivotal moment,” Shirley Newton says; couples are often surprised at their results. One may think the marriage is a 10, and the other may rank it much lower. Weeks later, the couples are asked to do it again, and the results are invariably higher. The Newtons say that intentionally working on the relationship and communicating their needs and desires makes the difference.

Love isn’t as complicated as you might think, they astutely note.To love and be loved is not only a faith-based proposition, but a basic human need and one worth nurturing.

“When your spouse feels appreciated, valued and affirmed,” Joe Newton says, “it builds a reserve that gets you through the tough times.”