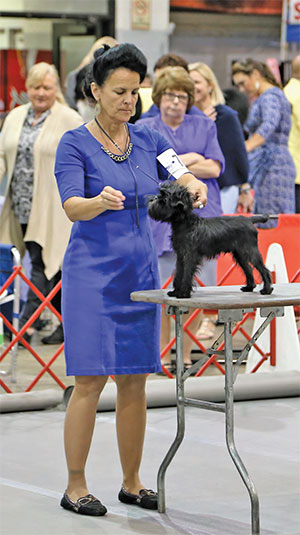 If it involves training, showing, grooming or boarding dogs, Janet Rahn has done it.

She had a pet and grooming store on Hilton Head for 20 years before selling it in the 1990s.

She traveled the world with Purina’s Performance Agility Team. When an injury sidelined that endeavor, she quickly found the next one.

Now, she crisscrosses the country with show dogs as their handler.

“I was going to show one dog for a friend of mine, Faith Ott (of Fripp Island). Anytime I get started on a project, it snowballs,” she said while traveling from West Virginia to Maryland in her RV with nine dogs aboard. “Two of them are mine, seven are clients.”

It’s that versatility that has served Rahn well, along with a fierce drive.

That competitive spirit extends to her dogs, too. She and Ott own a Spanish water dog, Jango, that won best of breed at Westminster Dog Show in New York this year.

Rahn’s success likely stems from the fact that she is adaptable. She changes her business models, training methods or focus as needed.

“When people don’t do well making a living through animals, they get stuck on one aspect. You can’t get stuck on one training method or one type of business. It’s just like show dogs. I know when they need to run around and get dirty and just be dogs. But I have one dog with me that doesn’t like that. She doesn’t like to get dirty. She’s laying on the couch next to me as I speak.”

Reading a dog’s needs is vital, she said.

“You have to treat dogs like dogs. They don’t think like humans, so you have to communicate in a way they understand,” Rahn said.

When time allows, Rahn also works with dogs in shelters that aren’t adopted because of behavioral problems. They need to be trained, and Rahn is just the person to do it.

“I donate my time because that’s my way of giving back,” she said.

Since she was 12, she knew she had a gift with animals.

“I have a knack for animals. No matter where I go, an animal will find me. When I work with rescue dogs, it’s just for the joy of it. It always works out for me,” she said.

When not traveling, home is a 30-acre Ridgeland farm with horses, chickens and cows — and, of course, dogs.

Rahn’s daughter, Chelsy Lancaster, and her three children are carrying on the family tradition.

Santa this year brought one of Rahn’s 7-year-old twin grandchildren a pony and her sister a calf that she bottle-fed. Both children are learning how to show dogs.

“We have a large indoor training facility. It’s 50 by 80 feet that we will rent out to other qualified trainers. There are a lot of dog obedience people in the area and this gives them a chance to work with their clients’ dogs,” she said.

The facility will host other events, too, including a local dog show in late September.

“I am my business. When you are a small business and you lose touch with your business, you lose your business. I have customers who currently own their second or third dog they’ve trained with me. I know them, I know their dogs.”

After all, a dog’s life means something sensational when Rahn is involved.