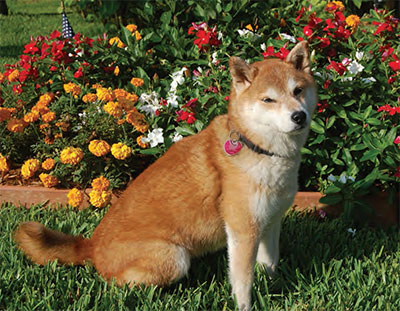 It seems everywhere that Kiva goes, folks fall for her pretty face. People want to pet her and ask about her breed, while children smile and joke about the song “The Fox (What Does the Fox Say?)” Kiva is a popular girl in Bluffton, but more importantly, she is the longtime friend and companion of Brittany Orr.

Orr had always wanted a dog as a child, but her brother was allergic to pet dander. But for her 18th birthday, Orr's parents took her to the Asa Hanna Kennel, where she picked out a Shiba Inu puppy. She had done her homework and knew that with socialization and training, Kiva would be a great dog, despite the breed’s reputation as a bit temperamental. Even though one of Kiva's many nicknames is “Kiva the Diva,” Orr was not about to have a prima donna on her hands.

According to the American Kennel Club, Shiba Inus can be strong-willed and territorial. Obedience training and socialization should help. They make great hunting dogs; originally, the breed was used in the mountains of Japan to hunt large game. Shiba Inus are still popular among the Japanese, who consider the breed the No. 1 companion dog.

Kiva certainly is a good companion to Orr. From day one, two were inseparable. Kiva joined Orr at the Southern Pitt Raceway, where they watched her cousin Gus Dean race. She also followed her to the University of North Carolina-Wilmington for Orr’s first year of college, and was right by Orr’s side as she studied long hours, went on weekend trips and attended functions and parties.

Three years ago, the two moved to Bluffton. Orr spent time in the area as a child with family, and she loved the area and wanted to be closer to her boyfriend, Clay Ward. Kiva sniffed him over and checked him out, and determined he was worthy of Orr. The couple was married on June 20 at Oldfield Plantation.

Kiva loves napping on her bed as Orr completes the coursework for her first year of law school at Savannah School of Law, or she’ll spend her days playing with her four-legged friends at the Bark Shack. When Orr has a soccer game or kickball match, Kiva is watching from the sidelines — unless it’s too hot, of course.

Kiva has been there for many of the biggest moments of Orr’s life, and it’s safe to say that wherever Orr goes, Kiva — or “Kivabear” — won’t be far behind.