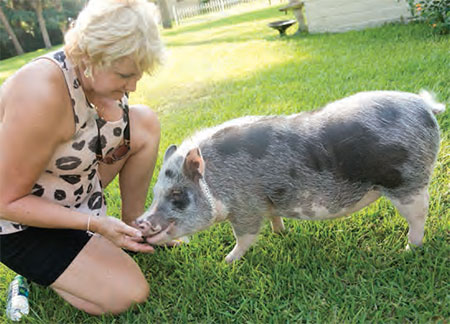 If you are heading to Brighton Beach in Bluffton, you might have seen cute little pig grazing in the yard of a house on Alljoy Road — and then you probably did a touble take, as most people do. That’s Lila the pig, owned by Diane Owens and Walter “Wally” Sumner.

“I called her my chemo pig,” Owens said. “She was my companion and kept me going when I was battling cancer, and now she has become kind of the neighborhood mascot. Everybody loves Lila.”

Owens is a wife, mother, friend to many and a Harley rider.  She works with Gary Sturgis at Plantation Dental in Bluffton, and in her free time enjoys boating, riding her motorcycle, traveling and exercising. When she felt a lump in her breast in the spring of 2013, she did not want to admit to herself that she had breast cancer.

“I was in denial.  I should have dealt with it as soon as I found out; instead, I went with what I had planned and that was riding to Bike Week in Myrtle Beach in May,” she said. “One of my fellow riders, who knows me well, asked what was going on when we got there. He told me he could see I was crying as I rode. I just wanted this one last ride before I had to deal with whatever was ahead of me.” 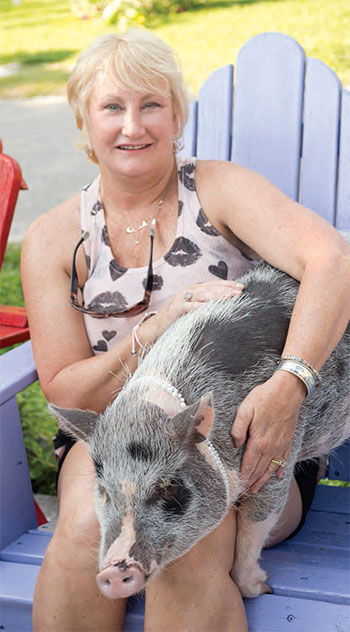 After growing up on a small farm in Laurens, South Carolina, Owens had always wanted a pig as a pet. Lila, a Juliana miniature pig, was born in August and came to live with Owens in November. As part of her breast cancer treatment, Owens had a mastectomy, followed by chemotherapy and radiation.

"I was so sick, so tired, my joints hurt, I lost all of my hair and I would drape towels over the mirrors in my home because I didn't want to see myself. I fought depression, and through it all Lila kept me going,” Owens said. “She made me smile when I felt like crap, made me laugh and she would want to be walked, so that would get me up and outdoors."

Owens jokes that she is Lila's “mama” and Sumner is her "person." Lila loves her “mama,” and her "person" is her buddy and friend. Sumner was very supportive of is wife during her cancer treatment, staying every night with her in the hospital, cleaning and cooking, and he has joined Owens in treating Lila like a human member of the family. Lila has a monogrammed swing coat, a Santa Claus suit and pearls — which, like any true Southern lady, she always wears when photographed.

And Lila is photographed often, because she has become a bit of a Lowcountry celebrity. Cameras come out when she rides with Sumner in his golf cart, which is one of her favorite pastimes. She enjoys cooling off in her baby swimming pool, taking long walks, rooting for grubs and peanuts. She also likes long car rides, but hates being awoken from a nap.

Owens is now cancer-free, though she is still undergoing reconstruction surgeries. She credits God, her family and her friends for her newfound health — and, of course, she is thankful for Lila. Now that she is cancer-free, Owens has big plans: "I have always heard that Kid Rock puts on a great concert, so I would like get tickets to see him perform. I have gone to Daytona and Myrtle Beach Bike Week, but would love to go to the Motorcycle Rally in Sturgis, South Dakota and really travel and experience life,” she said. “In the meantime, I enjoy the simple things like hanging poolside with little Lila or taking a ride to have the wind in my face."