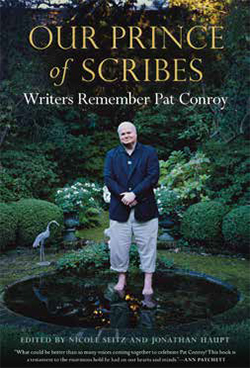 “Our Prince of Scribes”

Pat Conroy had a profound impact on the literary world. His work has inspired countless writers, and his generous spirit encouraged many to follow in his footsteps. Their appreciation for his support can be seen in a new collection of essays titled “Our Prince of Scribes.”

In 2004, South Carolina was one of the last states to legalize tattooing, and it took regulators more than two years to establish rules and allow the first tattoo shops to open.

Today, there are multiple shops on Hilton Head and in Bluffton, Beaufort and Hardeeville that draw local customers and vacationers as well as clientele from Savannah and beyond.

A few years back, Huntley Tarleton was looking for a way to add some flair to the Motoring Midway at the annual Hilton Head Island Concours d’Elegance & Motoring Festival. The theme was “The Quest for Speed and Style,” and Tarleton needed to find additional exhibits that would capture patrons’ attention and interest as they passed between class car exhibits on the first and 18th holes at Port Royal Golf Club.

PINNACLE COLLECTORS PETER AND MERLE MULLIN’S CARS HEARKEN BACK TO AN ARTISTIC ERA WHEN FRANCE WAS THE TOP OF THE AUTOMOTIVE WORLD.

It was 37 years ago, but Peter Mullin can still tell you everything about the moment his love of art deco cars began. Mullin’s Paul Williams-designed home in Oxnard, California, had made the perfect backdrop for a friend’s photoshoot centered around classic cars, and when Mullin saw the 1948 Delahaye 135MS, it sparked an admiration for France’s pre-war fame for automotive elegance.

BUMPER-TO-BUMPER EXCITEMENT FILLS THE CALENDAR OF EVENTS DURING THIS YEAR’S EVENT.

Odds are good that if you’re local, you just refer to it as “Concours.” As in, “You going to Concours?” (The correct response to which is, of course, yes).

But there’s a reason why the event we so casually shorten has a mouthful of a title: Hilton Head Island Concours d’Elegance & Motoring Festival. That’s because the Concours itself, a parade of stunningly elegant vehicles before a panel of judges, is just a small part of the weeklong celebration of automotive refinement and excitement.

Sun, sand, surf: There’s plenty to love about a day at the beach. But maybe you’re looking to make your next visit to the shore a little more fun. We’ve got you covered with a few game ideas the whole family will love.

Coastal South Carolina and coastal Georgia are home to many of the country’s top 100 private residential golf communities, as rated by Links magazine. From Sea Pines to Savannah Harbor, the area is ripe with lush greens just waiting for hackers.

Two of the most iconic and most visited historic towns in the U.S., Savannah and Charleston, draw millions of tourists, and Hilton Head Island does pretty well, too. Many play golf while visiting, and some decide they want to retire to the Lowcountry. The mild climate, dramatic marsh vistas, live oaks, palm trees and the availability of vast tracts of affordable land all favored development of high-end residential communities centered around golf.

GET INSPIRED FOR A LOWCOUNTRY WEDDING TO REMEMBER

No two weddings are alike, because no two couples are alike. But one thing ties them all together: love. Traditions evolve and trends change, but weddings will always elicit the same emotions, whether you’re the groom or a guest. And any event filled with love, joy and hope deserves to be breathlessly anticipated and exceptionally well-planned.

We’ve curated a list of 12 ways to start fresh in 2018, focusing on your mental, physical and social well-being so that you can accomplish all you set out to do this year. But for those looking to improve their lifestyle in the new year, you might want to try baby steps instead of cannonballing straight into the deep end. When you weigh yourself down with too many expectations, you automatically set yourself up for failure. Try breaking down these 12 steps into a plan that better suits your needs.

CHAMPAGNE IS THE PERFECT SIP FOR ALL SEASONS

When Cher’s character Loretta Castorini dropped a cube of sugar into her Champagne in the movie “Moonstruck,” purists gasped — but hey, at least she got her man. But we can’t condone the sugar cube-bubbly blend. At most, adding some crème de cassis or Chambord to make a Kir Royale is perfectly acceptable but first things first: Champagne comes from the geographical region of Champagne in France, produced under strict French law. Anything else is just sparkling wine.