In 2004, South Carolina was one of the last states to legalize tattooing, and it took regulators more than two years to establish rules and allow the first tattoo shops to open.

Today, there are multiple shops on Hilton Head and in Bluffton, Beaufort and Hardeeville that draw local customers and vacationers as well as clientele from Savannah and beyond.

Local tattoo artists say they get a lot of requests for regional images — think the state flag’s palmetto and crescent — as well as enduring favorites like religious imagery, birds, butterflies, roses, feathers, the infinity sign and Japanese letters. 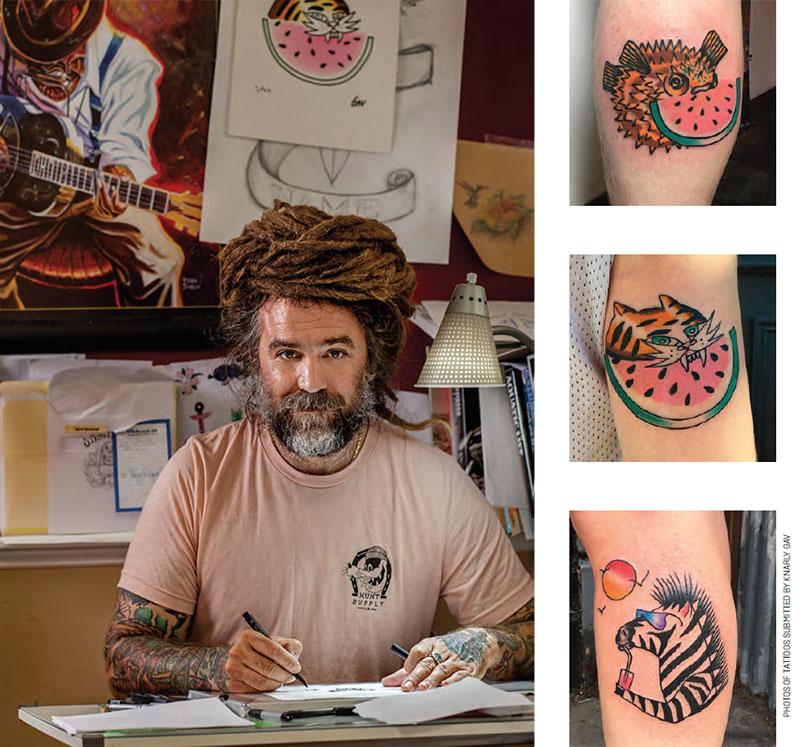 “I’d say 70 percent to 80 percent of people know what they want. They bring in a picture and then we take it from there,” says artist Lalo Lopez, who opened Ink Revoluzion in Hardeeville in 2013 with business partner Johnny Rivera.

Hilton Head Island native Gavan Daly, 44, who has become one of the Tattoo artist Gavan Daly, better known as Knarly Gav, works on a client’s leg. most popular tattoo artists on the internet, agrees. He says he does much more original work at the Brooklyn studio he co-owns with his wife, jewelry artist Selina King, than when he’s creating tattoos at Bluffton’s Sugar Shack Canvas and Ink Tattoo. 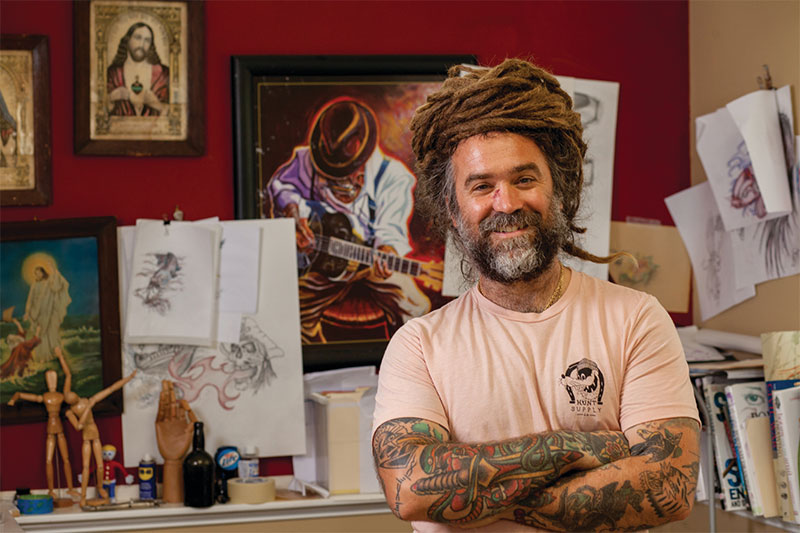 “Around here, most people come in wanting tattoos they’ve seen on Pinterest,” he says. “I like to try to give them a better design or a better version.”

Daly got into tattooing after a successful career in music — he’s played with everyone from the New York Philharmonic to the University of South Carolina Marching Band and B.B. King, and still plays occasionally with his father in local band Skinny Bike. His timing was perfect; he made his career switch just as South Carolina’s first tattoo shops were opening. After reading the 2007 tattoo “flash” book, “Revisited: A Tribute to Flash from the Past,” he decided tattooing would be his next gig.

Being on the cutting edge was old hat to Daly, better known by his “nom de art,” Knarly Gav. He and his brother, popular local musician Jevon Daly — of Low Country Boil, Silicone Sister, JoJo Squirrell and the Home Pickles, and other bands — were Pied Pipers of cool growing up on the island, leading the way on everything from surfing to skateboarding to bungee jumping. 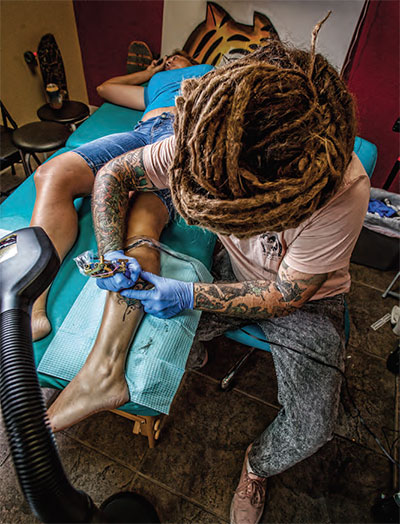 “We’ve always started trends around here, me and my brother,” Daly says. “The richest people on the island, their kids were following the (Grateful) Dead with us and getting dreads.”

Daly put together a portfolio of his artwork and approached Island Tattoo, the leader of the of local tattoo scene. He earned an apprenticeship and was soon mopping floors, making stencils and running errands for the shop.

But with his long-standing island connections and outsized personality — these days, he’s easily identified by the dreadlocks piled like a nest of cobras atop his head — he quickly helped the shop develop new clientele. Within months, he was creating a dozen tattoos a day.

More than a decade later, Knarly Gav’s unique style has earned him a spot on a list of the “10 Tattoo Artists You Need to Follow on Instagram” and a  recent feature story at Playboy.com. His original work is simple, almost primitive, colorful and whimsical. Among his best-known designs are sharp-fanged cats munching watermelon — “as iconic as any (design) in modern tattooing,” one critic notes — and an eagle on a skateboard.“

I’D SAY 7‘0 PER‘CENT TO 80 PERCENT OF PEOPLE KNOW WHAT THEY WANT. THEY BRING IN A PICTURE AND THEN WE TAKE IT FROM THERE.
– LALO LOPEZ, TATTOO ARTIST IN HARDEEVILLE

I’m the only tattooer on the island who’s from here, and you could say my brand is really spawned out of this area,” says Daly, who also takes his talents — and his cat, Smitten — on the road, rock-star style, several times a year. 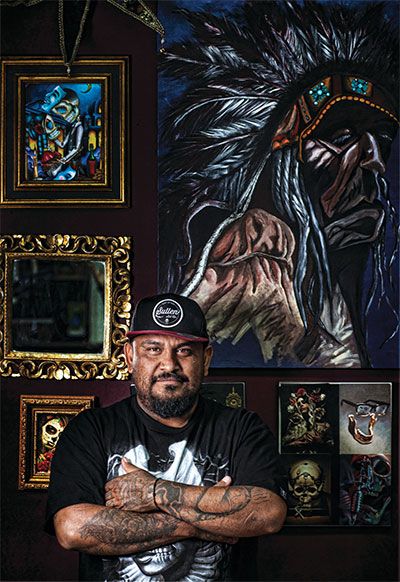 Lopez is more introspective but just as dedicated to his art. He and Rivera know their tattoo shop isn’t the biggest or longest-standing in the area, they say they’ve found a niche providing a meaningful experience to every customer. Many, but not all, of their clients speak Spanish.

“People love the spiritual trip we give them,” says Rivera, who says half of Ink Revoluzion’s customers come from Georgia. “They give us a kiss and a hug, or extra money, to say thanks for a tattoo of their dad who just passed away, or the footprint of their kid who was just born.”

Their shop offers a personal connection that brings in customers from miles away.

“Savannah has over 20 tattoo shops,” Lopez says. “People come up here because we take time with our customers. …We want to give them a tattoo that they really feel is a part of them.” 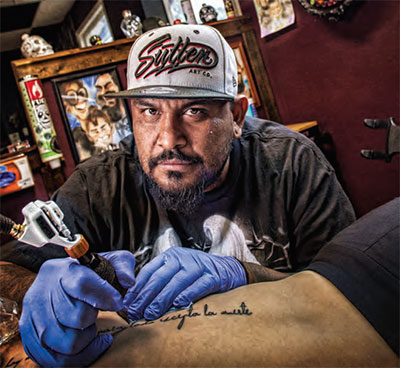 Don’t rush yourself when choosing an idea. You’re going to have to live with it forever. Most artists have a speciality. For example, if you want a photorealistic tattoo don’t choose an artist who specializes in cartoon characters. Look into the cost of the tattoo before walking into the shop, don’t sacrifice the tattoo you want to get a good deal.

Eat a full meal beforehand. Don’t drink alcohol or use drugs beforehand. It’s illegal in South Carolina for artists to tattoo anyone who appears intoxicated.

Don’t rush yourself when choosing an idea. You’re going to have to live with it forever. Most artists have a speciality. For example, if you want a photorealistic tattoo don’t choose an artist who specializes in cartoon characters. Look into the cost of the tattoo before walking into the shop, don’t sacrifice the tattoo you want to get a good deal.

BRING A REFERENCE PHOTO, IF POSSIBLE

Bring in a high res photo if possible—one that is big and not blurry.

DON’T BRING YOUR ENTOURAGE TO THE SHOP WITH YOU

It’s fine to bring a friend, any more than one is distracting. Children are not permitted in many tattoo shops.

The artist knows what he or she is doing. Don’t be a “backseat driver.”

CHECK SPELLING BEFORE THE TATTOO BEGINS

If you see something is spelled wrong in the stencil, say something.

BE PREPARED FOR SOME PAIN

Don’t be afraid to tell your artist that you need to take a break if the pain is too much. People have different levels of tolerance for pain and artists know this. They also don’t want clients to pass out. Most people find the feet, hands and head are some of the more painful areas to get a tattoo.

Make every effort to remain as calm and still as possible while getting tattooed.