There are lots of ways to tell a story, even a history, with an almost passing glance. This is one of those: a quick peek mostly at people groups who have been part of the story of this very special island.

Aborigines – The first visitors enjoyed Hilton Head when Calibogue Sound was really a valley through which a small river and wildlife passed and the visiting hunter/gatherers crouched along the banks awaiting dinner. If our dating of their left-behinds are accurate, that was 10,000 years ago, pre-island days for Hilton Head and during a major global warming that was causing the distant ocean to march westward. 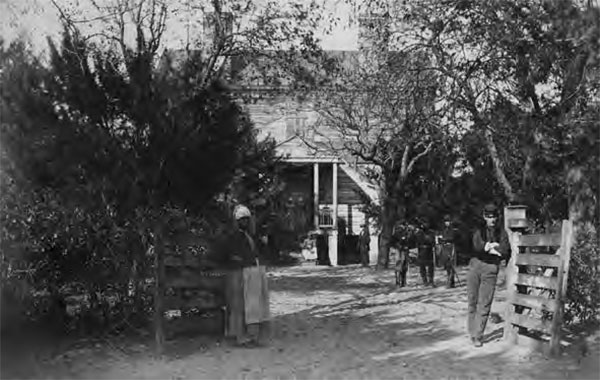 A liberated female slave and Union soldiers stand in at the entrance to the captured plantation of the General Thomas F. Drayton, Hilton Head Island, South Carolina.
Photo by Henry P. Moore, May 1862.

Mystery Guests – A few thousand years later, the high banks over that valley had become the low-lying islands of Hilton Head and Daufuskie Island.  After that time, around 4,000 years ago, a mysterious group of Indians paid repeated visits to Hilton Head over many generations and left behind three puzzling shell rings. One is still preserved in the Sea Pines Forest Preserve, but two others were used by early settlers to build tabby houses and surface roads. They are some of only 20 known such rings in the Sea Islands. 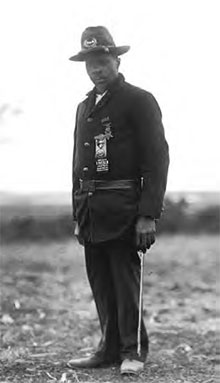 Spaniards – Entering “recorded history,” this area first shows up in the 1500s, after the Europeans thought they discovered a New World in 1492.  But Hilton Head and the adjacent North America were not their focus — most eyes were on the Aztec and Incan gold in South America. The Spanish were dominant in the exploitation and plundering, and they often sent their treasure-loaded galleons up to Hilton Head for wind and water. They got the water at Spanish Wells and the wind off shore where the “easterlies” would take them straight to Spain.

Barbadians –Meanwhile, English settlers had focused on the Caribbean Islands and establishing agricultural-based economies. Wanting to expand operations, and sniffing the political winds, planters in Barbados sent Capt. William Hilton to this area to check out its potential.  Captain Hilton showed up in 1663, gave us nothing and went home, leaving only his name behind.

King’s Cronies - Not so coincidentally, during Hilton’s visit, England’s King Charles II granted this region to eight loyal English cronies, known as the Lord Proprietors. They arranged for the 1670 settlement of Charles Town by Englishmen from Bermuda, to be followed by settlers from Barbados, England and Virginia.

Heros – As settlement moved south, the Yemassee Indian Wars of 1715-1730 interrupted the 1711 settlement of Beaufort. But when work resumed, focus also turned to Hilton Head when Col. John Barnwell, a Carolina hero of the Yemassee conflict, was granted 1,000 acres on the island’s north end.

Revolutionaries - Island settlement was still advancing when the 1776 American Revolution erupted, not that devastating for the island, which consisted of maybe 30 families and a few plantations. It did result in casualties and something of a row-boat war with English sympathizers on Daufuskie.

Slaves - After the Revolution, Hilton Head became home to almost two dozen cotton plantations during an 80-year run of prosperity, between the Revolutionary and Civil Wars. While those eight decades were mostly smooth sailing, it was on the backs of more than an estimated 1,000 enslaved souls working on the island. 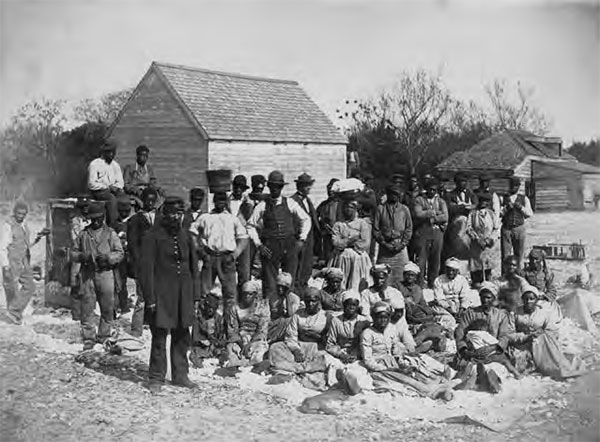 Yankees – With succession, the prosperity run came to a crashing halt in 1861 and island life was turned upside down.  The Union headquartered its coastal blockade here with up to 50,000 Union troops in a tent city, which also housed thousands of support civilians, slave refugees, wounded soldiers and captured Confederate troops.

The Gullah - When it was all over, the economy again turned rural and the former slaves who remained settled small communities scattered around the island where they farmed, worked the sea and lived in relative isolation for almost a full century.  Those were the decades that the rich Gullah culture with its language, crafts, community and faith became solidified.

Timbermen -. By the 1950s, the tall timber, which had been mostly cleared to make room for Sea Island Cotton, had grown back and a timber consortium from Hinesville, Georgia, bought 19,000 of the island’s 25,000 acres.Those timber tycoons all became benefactors of the island, not just exploiters, and the son of one, Charles E. Fraser, was particularly enraptured by the natural wonder and beauty of Hilton Head. He put his special intellect to work devising ways to create a profitable coastal resort for regular people without destroying the resource in the process. 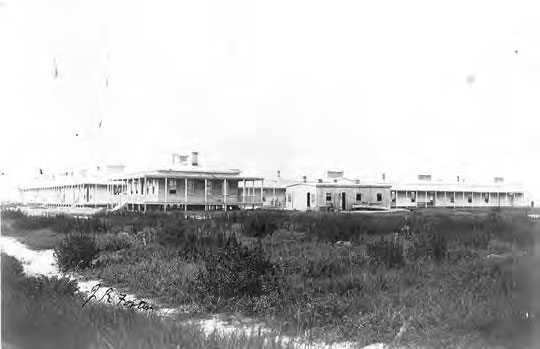 The Rest of Us – That is where we came in, starting slowly in the 1950s. Those first families caught the vision, loved it and lived it. Carrying it forward now depends on the rest of us.

EDITOR’S NOTE: For our annual City Guide, we reached out to longtime resident Glen McCaskey to help tell the story of Hilton Head Island and Bluffton. McCaskey has been deeply involved in the evolution of the Lowcountry since moving here in 1970.