A miniature golf course featuring 36 holes on two Caribbean-themed courses, plus an arcade.

Located in the middle of Hilton Head Island, this 349-seat main stage house along with a smaller black box venue puts on professional and visual arts performances, as well as festivals and educational programs. From musicals to comedies and dramas, the arts center does it all and also brings in visiting performers. Stop by for an entertaining night that will enlighten you.

Located just outside the Sea Pines gate, this grouping of popular bars and restaurants shares a courtyard, perfect for enjoying their late-night menus and entertainment.

The ruins are all that’s left of the Baynard estate, which was built in 1793 by Capt. Jack Stoney and once included a main house and slave quarters. The buildings were made using timber and tabby, a mixture of oyster shells, lime and sand. William Edings Baynard acquired the property from the bank after the Stoney family declared bankruptcy in 1837. It was raided during the Civil War and used by Union forces for a headquarters, and burned down shortly after the Civil War.

On the southern-most point of Hilton Head, at the junction of Calibogue Sound and the Atlantic Ocean, is Braddock Point. It was named after David Cutler Braddock, captain of South Carolina’s provincial galley, Beaufort, which was stationed in the cove.

Water fountains, swings, changing areas, a boardwalk and the island’s most popular tiki bar. Across the street is Coligny Plaza, home to more than 60 shops and restaurants.

While today it may be an island all about luxury homes and resorts, Hilton Head was home to four military forts during the Civil War. Though the remains of Fort Mitchel are long gone, the history remains. Located off of Skull Creek Drive in the gated Hilton Head Plantation, visitors will need to get a pass to explore the remains of the fort. Fort Mitchel was rediscovered in the 1970s and was named after Gen. Ormsby M. Mitchel. It has been preserved even as the island has developed all around it. 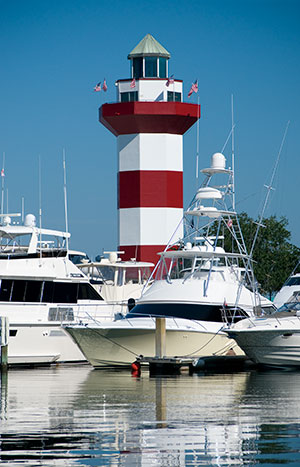 Home to a well-known symbol of Hilton Head, the iconic red-and-white striped lighthouse built by Charles Fraser in 1969. Harbour Town is home to a marina, shops and restaurants, and is family friendly with a park for children. It is also the site of the PGA Tour’s RBC Heritage Presented by Boeing golf tournament, which is televised each year attracting visitors from all over. 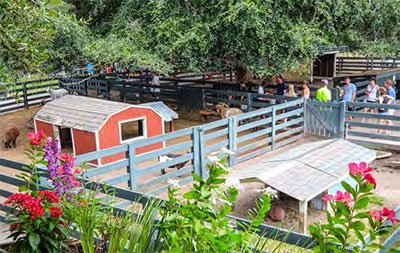 Horseback riding and an awesome free animal farm. Bring carrots or apples and feed Harley the Clydesdale or the other horses. 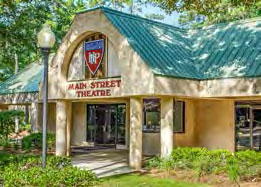 Many performances are put on each year. The theater is also home to live music and other special events. 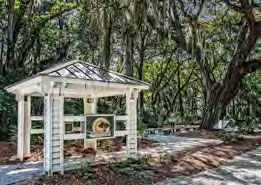 Built during the Civil War for freed and escaped slaves and named after Union Gen. Ormsby M. Mitchel, who created the town to allow the former slaves to govern themselves. The people created a community and built simple homes, a church and stores, and worked to provide education for their children. Many worked for the Union Army until it left the island, then many turned to the land.

The first inhabitants on the island were semi-nomadic Native Americans who lived about 4,000 years ago. The ring contains oyster, mussels and clamshells, as well as pieces of animal bones and antlers. It is one of only 20 shell rings remaining today. Since it was inhabited by the Native Americans, the area has been used for growing anything from rice, indigo, cotton, and has been used as hunting grounds and cutting down trees for timber.

Luxury reclining seating with many screens showing the newest releases. 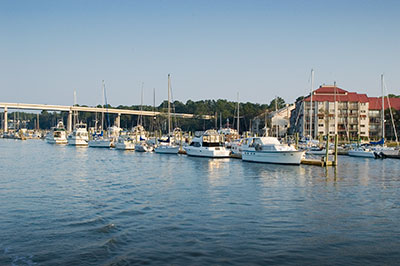 The only movie theater on the island serving beer and wine.

PINCKNEY ISLAND NATIONAL WILDLIFE REFUGE
Off of U.S. 278, just before the bridge to Hilton Head Island

A full line of Salty Dog gear, without a trip to South Beach.

THE SANDBOX: AN INTERACTIVE CHILDREN’S MUSEUM
18A Pope Avenue

A children’s museum that offers plenty of activities for rainy days. 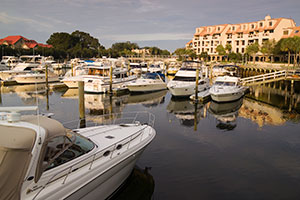 Restaurants, shopping and a tackle shop. Home to the South Beach Inn and the popular Salty Dog Cafe.

The island holds a lot of history, and the Stoney-Baynard Tabby Ruins are just one aspect of it. The main house and slave quarters of the old Baynard estate are permanently preserved in Baynard Ruins Park. Built by Capt. Jack Stoney around 1793 and overlooking the Calibogue Sound at the south end of the island. During the Civil War, the house was raided and Union forces made it their headquarters until it was burned down shortly after the war. 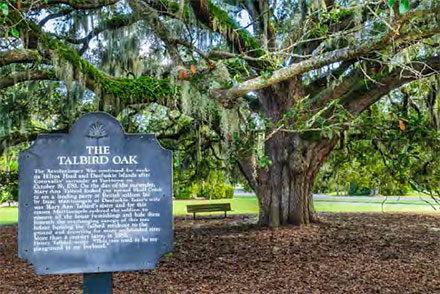 Just inside the Hilton Head Plantation stands a tree with a heart-breaking story. In October 1781, during the Revolutionary War, a royal militia on Daukuskie Island was commanded to burn the homes of patriots from Beaufort to Savannah. The Taibird Plantation belonged to Lt. John Talbird, who was away at war while his wife — who was nine months pregnant — remained at home. Mary Ann Talbird’s brother-in-law was in charge of the burnings for the militia, and when he arrived at her door he refused to pass by without fulfilling his duty. However, he did allow Mary Ann to move all the household goods out of the house and put them under a live oak about 100 yards from the house. After watching her home burn to the ground, Mary Ann gave birth to a son the next day. The tree still stands today, keeping alive the history with it.

Featuring 17 hard courts, four covered and lighting at the DeAllyon location. There are 20 courts at the Shipyard location (13 Har-Tru and seven hard). Eight are lighted and three are indoor.

A collection of 30 upscale shopping, dining and pampering merchants. Most are locally owned.

ZION CHAPEL OF EASE AND CEMETERY
U.S. 278 and Mathews Drive

The Hilton Head Island Episcopal Church of Ease of St. Luke’s Parish was built in 1786 under the direction of Isaac Fripp and Capt. John Stoney. The chapel was consecrated in 1833. In 1834, the communion service, which is still in use, was imported from London. The chapel was abandoned and destroyed in 1868. Zion Cemetery, with the massive Baynard mausoleum built in 1846, marks the location of the Chapel of Ease.