“Good colored people, you have a great work to do, and you are in a position of responsibility. This experiment is to give you freedom, position, homes, your families, property, your own soil. It seems to me a better time is coming … a better day is dawning.”

Union Gen. Ormsby Mitchel proclaiming that the land the people of Mitchelville, South Carolina, had once toiled under the chains of slavery was now their own.

The story of Mitchelville was a radical idea during a time in our nation’s history when the Union forces were trying to win the Civil War, as well as figure out how to deal with a large population of newly freed blacks who were dispersed throughout the South. 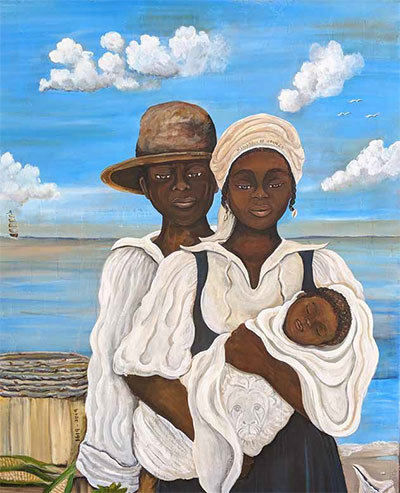 The Mitchelville Gullah who were living on Hilton Head Island lived in a way that was far from common. Under military protection from Fort Howell, they were able to create a safe space during a hostile, life-threatening environment. They became free while being surrounded by states that were not ready to give up on slavery, and they managed to develop a relatively comfortable, profitable and traditional way of life.

In 1861, the Union Army had liberated the Sea Islands off the coast of South Carolina and their main harbor, Port Royal. At the sound of the gunboats, white Confederate soldiers, plantation owners and residents fled Hilton Head during the invasion, leaving behind everything — including 10,000 black slaves.

Once the Union Army occupied the island, the Port Royal Experiment began, which was a massive humanitarian effort to address the needs of the newly freed men, women and children. Although the military was in charge, it sought help from Northern charity organizations, which came South to help them become self-sufficient. The Port Royal Experiment was comprised of several programs that provided the formerly enslaved opportunities to live and successfully farm land abandoned by their former plantation owners.

One element of the program was the establishment of the town of Mitchelville, which began in 1862 when Gen. Ormsby Mitchel assumed command of the X Corps and the Department of the South at Hilton Head Island, which became the central location for the Union Army and the launching point for military operations.

Mitchel issued a military order freeing the slaves on Hilton Head and nearby sea islands, providing them with hundreds of acres where each family was given a plot to grow crops and encouraged to organize their own town. Provided with building materials for housing, they were able to buy land, vote, and work or farm for wages.

The Gullah residents established a fully functioning town with its own organizational structure, elected officials, taxes, retail stores and compulsory education for children aged six to 15 — something that had been denied to them as slaves.

Mitchelville’s origin might have begun more than a century ago, but the footprint of the Historic Mitchelville Freedom Park has been actively continuing to be relevant for future generations.

Currently, with a master plan as its foundation, raising funds for its $25-million-dollar capital campaign is the focus, but in the meantime several exciting initiatives are in progress.

Recently, surveying and mapping the park’s 24 acres for potential building sites, has led to the discovery of some exciting finds within the park. Led by Katherine Seeber, a graduate student from Binghamton University’s Department of Anthropology, a full brick hearth and the footprint of a home, a praise house and hundreds of Colonoware, a type of ceramic that was not produced by anyone other than enslaved people, have been discovered around the historic grounds.

Mitchelville’s story and the stories of its people are constantly evolving.

In addition to surveying the land within the park, negotiations are in progress for Seeber to conduct archaeological and geophysical research on additional parcels that were donated to the project from the Town of Hilton Head and Beaufort County.

Telling the Mitchelville story and maintaining connections with the community are a significant part of their mission. Programs like the Griot’s Corner, which offers local schools storytelling, developing lesson plans for South Carolina teachers are just a few of the ways that the park is trying to educate and engage future generations.

Known for hosting educational and entertaining events year-round, including the popular annual Blues & BBQ and Juneteenth celebrations, their upcoming anniversary forum on Oct. 29, highlights 160 years of Mitchelville and its connection to waterways.

“We’re very excited about the momentum for the project,” said Ahmad Ward, executive director of Historic Mitchelville Freedom Park. “HMFP is awaiting word on funding that could have the organization beginning to implement vital infrastructure as early as the end of the year. Stay tuned for important updates in the near future.”