SIGNIFICANT ARCHAEOLOGICAL DISCOVERY MADE AT MITCHELVILLE

Katherine “Katie” Seeber first came to Hilton Head Island in 2015 as a graduate student of archaeology at New York’s Binghamton University, to assist one of her professors with the excavation of indigenous shell rings.

It was, you might say, the beginning of a beautiful friendship.

Now, more than five years later, Seeber is in the final stages of preparing a report on a detailed archaeological survey that has already begun to deepen historical understanding of the first self-governed town of formerly enslaved people in the United States.

From November 2020 to January 2021, Seeber and her team of five used ground-penetrating radar, magnetometry and electromagnetometry to survey the 24-acre site, generating nearly 600 scans and “a massive amount of data.”

Preliminary estimates show that as much as 88 percent of the area may contain potential “underground cultural anomalies,” Seeber says, including some from indigenous inhabitants who pre-dated the town. 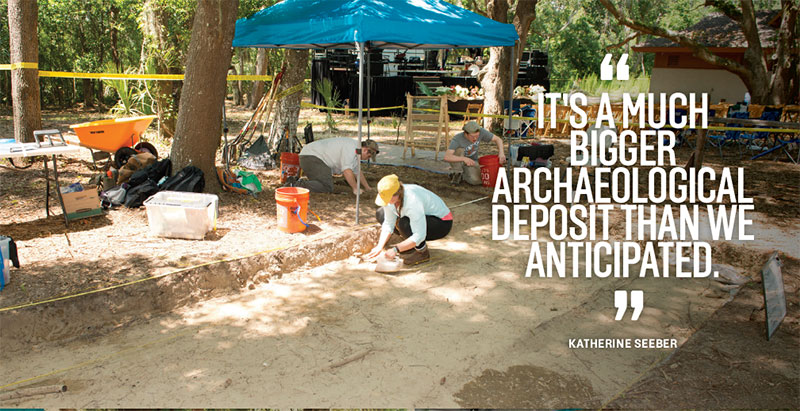 Most significantly, the survey led to her team’s discovery of an intact brick hearth believed to be the only remaining physical structure built by the Mitchelville community, which thrived as an intact town from 1862 into the 1880s.

“That is the only structure we have physically left within the park that dates directly back to the community. Everything else was dismantled or likely wiped out by the hurricane of 1893,” says Ahmad Ward, executive director of the non-profit Historic Mitchelville Freedom Park. “Now we have something to interpret and guide some real instruction around.”

The hearth was first identified — and long believed removed — by archaeologist Michael Trinkley, who conducted the first study of the site in 1986. When Seeber’s survey encountered the structure in November 2020, it was assumed to be a remnant.

But when Seeber’s team returned in August 2021 to investigate further, they discovered that the structure extended four feet down, having been buried by the natural accumulation of organic matter and sand relocated during the 1893 hurricane.

“We thought it was the bottom, but it turned out to be the top,” says Seeber, now an archaeologist and field director at Charleston’s New South Associates. “It’s a much bigger archaeological deposit than we anticipated, which is really cool.” 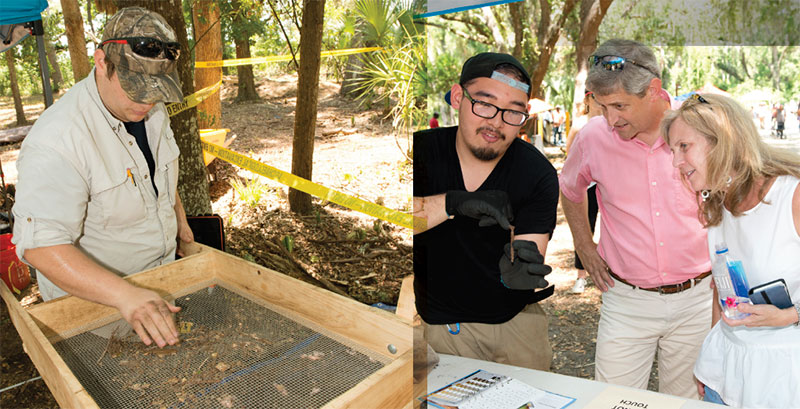 Seeber’s team capped the hearth to protect it.

“This has caused a shift in our plans. We’re regrouping with our landscape architect to decide what method to use for interpretation,” Ward says. “But it won’t be coming out of the ground.”

Seeber’s survey was made possible by a $50,000 grant to Historic Mitchelville from the African American Cultural Heritage Action Fund from the National Trust for Historic Preservation. Mitchelville was just one of 27 projects funded in 2020, and the only one in South Carolina.

Seeber has been working in the area for the nonprofit since 2017, initially recruited by former board member Charles Bouggess. Her team has discovered the remnants of a church in 2018 as well as several indigenous sites pre-dating the town. She began urging the board to conduct a complete survey of the site in advance of developing the planned $22 million park.

“You’d be really upset if you destroyed important archaeology,” she recalls saying.

Seeber’s work on the island not only continues to advance historical understanding of Mitchelville. It also has changed the trajectory of her career.