Nested in the serenity of Port Royal Plantation, Michael Mitelman and his wife, Nina, live in a home bursting with art and history.

“I love every piece,” Mitelman beams. “It gives me joy.”

From front door to the farthest hallway, his stunning collection of about 60 paintings by notable Eastern European artists reflects not only a love of art but also his extraordinary life, which began in Moscow during Stalin’s reign of terror.

Mitelman, at 3, saw his father taken by Stalin’s guards. A few months later they came for his mother. Thanks to an aunt, he was adopted, saved from life in an educational camp and the stigma of being “the member of a family of traitors.” “I survived,” he adds, “but many people did not.” 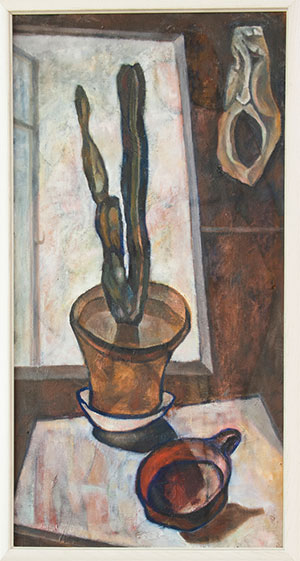 Although Mitelman’s mother returned some eight years later, his father never did. Mitelman never became bitter, though. As he matured, he found beauty and inspiration in Moscow’s numerous art museums.

Always optimistic, he secured a degree in electrical engineering, got married and dreamed of taking his wife and son, Sasha, out of Russia.

A painting, gifted by his friend, Paul Zepelinsky, became symbolic of the family’s plans. Referred to as “The Cactus,” the artwork reflects the emotions inherent in leaving a country, something the artist understood as he, himself, later immigrated to Nashville, Tennessee, in 1973.

Zepelinsky then worked with contacts in Israel to help the Mitelmans do the same. After many letters the government finally granted them permission to leave in 1977.

But the painting, like many others at the time, was deemed “a treasure belonging to the State” and prohibited from leaving the country. So, the family sold it for travel expenses, vowing never to forget about the piece.

“On a return visit 12 years later,” Mitelman laughs, “I bought it back for three times what I sold it for.”

The painting now hangs in the dining room, a reminder of their long journey out of Russia that began with a 10-day stop in Vienna, led to a three-month stay in Italy, and culminated in a trans-Atlantic flight to New York City with a connection to Nashville.

“Life was hard,” Mitelman says, “but we’ve always been happy.”

He then points to a small painting depicting the Arc de Triomphe in Paris, France, that hangs near the kitchen. 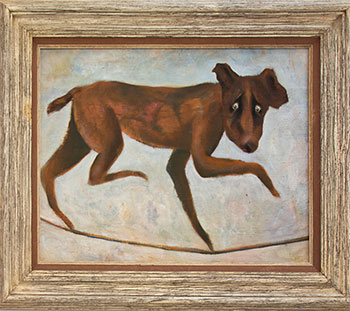 Two years later, Mitelman landed a job as an electrical engineer with a power company in Milwaukee. Then he worked for General Electric in North Carolina. In the 90s, a Swiss-American company offered him a position in Kiev, Ukraine.

An American citizen since 1983, Mitelman says, “I turned them down, but eventually they convinced me to go.”

With their son off to college, the Mitelmans headed back to what was once part of Russia.

Mitelman describes their f ive years in Kiev as “compl ex” but also acknowledges it was the perfect time to invest in art, especially since a friend co-owned a gallery.

He started with small pieces by Sergey Grigoriev, but it was the vibrant colors of Nikolai Glushchenko that made his heart soar. Two of his favorites — one of Venice and another of Zhukov Island — hang in the couple’s bedroom. “Every work has a history,” Mitelman said. “Glushchenko lived in Paris, combining his art with secret service as a KGB agent — a fact that became known after his death in 1977. He warned Stalin about a German invasion.” 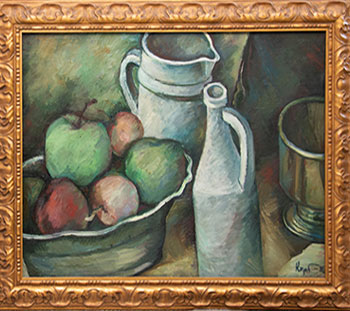 When asked about favorites, Mitelman sighs, “Some of them I like more than others, but all are special.”

He calls the works by his friend Zepelinsky “treasures.” He sings the praises of one young artist, calling her “genius,” and turns the light on above a painting by Nikolai Sinezubov, deeming it “special.”

Most of the work in his collection is from the late 1960s and early 1970s, but Mitelman has sketches and drawings from the early 1900s and late 1940s.

“All,” he concludes, sweeping his arm towards the portraits and landscapes that surround him, “give me an absolute sense of fullness.”