Hot weather and high humidity are as much a part of coastal South Carolina as wraparound porches and sloping metal roofs. Traditional architectural styles frequently found in old-time Savannah and Charleston eventually took root in Beaufort and Bluffton and on Hilton Head Island, shaping the style of the Lowcountry.

It’s a unique look — though architects, interior designers and builders are hard-pressed to define it. It is clear, however, that the growth of this distinctly Southern style was shaped by the needs, construction materials and traditions of the time.

Today, the elements many consider highlights of Lowcountry design are as common in in the area’s homes as Spanish moss hanging from massive live oaks. Whether these residences are formal or informal, cottages or farmhouses, tropical villas or one- and two-story traditional homes, they are all symbolic of the Lowcountry.

Lowcountry design can be traced to 1670, when the first permanent settlement in South Carolina by the British was established near Charleston. The hot, humid climate that stretched from the Holy City to Savannah forced architects to rethink their original one-level cottage designs; they started building homes over crawl spaces to prevent coastal flooding and to allow air to circulate underneath the house, keeping things cool. They also added double-hung windows that opened at both top — to let warm air out — and bottom — to let cool air in, as well as spacious porches faced south to provide shade from the sweltering summer sun and capture late afternoon breezes. High ceilings kept warm air away from the people below. 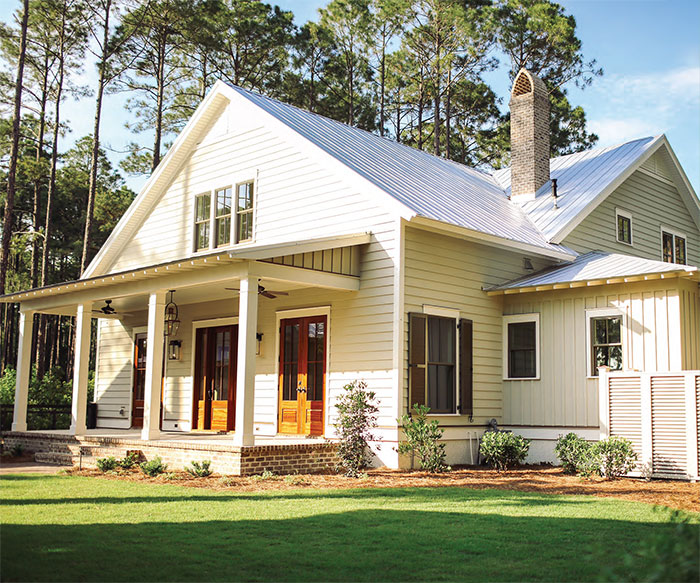 These practical touches became ubiquitous to architecture on Hilton Head and in Bluffton. But, of course, there’s one other “signature” design element that can’t be found anywhere else: The stunning Lowcountry view.

When William Court of Court Atkins Group designed a carriage before starting work on the Palmetto Bluff property’s main residence, he “strategized where the main house was going to be,” he said. “It was obviously going to get the primary river views, so we angled it on the property to get the longer views of the May River and to work within the canopy of the existing tree coverage.”

Then he incorporated some of his “favorite timeless Southern Lowcountry details”: Gable roofing covered with standing seam metal panels that slope down to hug exposed rafter tails and stained cedar shingles that frame the oversized double-hung windows, touching the clean-line board-and-batten vertical siding. 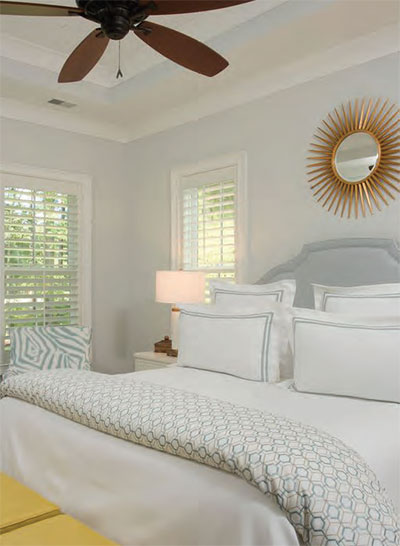 “Those are all things that are right in the wheelhouse of the Southern Lowcountry feel,” said Court, who co-founded the company with James Atkins in 2004.

Set amid longleaf pines, mature live oaks, cedars, hickories, laurels and palmettos, the well-styled home looks like a natural piece of the Lowcountry landscape — just the fit Court was going for.

He continued that seamless transition inside, using distressed Savannah gray brick and reclaimed pine beams to separate the kitchen from the two adjacent open living spaces to create “more of a visual demarcation, rather than a barrier or wall separations.”

When it comes to adding a few Southern touches and Lowcountry accents to a home’s interior, look no further than the experts at J. Banks Design Group on Hilton Head. For proof of their Lowcountry know-how, check out the showcase cottage the firm decorated as part of a special homes tour in the award-winning community of Habersham, on the southwest outskirts of Beaufort.

Lisa Whitley, who has been an interior designer with J. Banks since 2007, headed the project and focused on “portraying the lifestyle that Habersham is all about.”

She managed to harmoniously combine all of the elements of casual Southern living in the 1,800-square-foot space, including a spacious front porch to showcase “Southern-style hospitality, how people really live in the South,” she said. 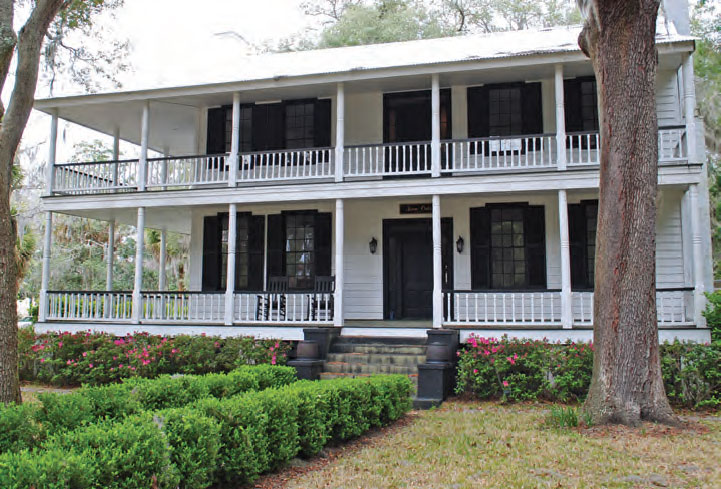 “Habersham is a very community-oriented place; they love their neighbors, which is very much what I would say is the Southern living lifestyle,” Whitley said. “When you think about what’s great about living in the South, and especially here in the Lowcountry, it’s the old front porches; it’s very neighborly with people coming over to each other’s houses.”

As for an interior color scheme, that inspiration came naturally.

“I pulled colors from living here in Beaufort County,” Whitley said. “Colors from the marsh, colors from low and high tides … You catch so many ranges of colors — what you’ll see in an oyster shell versus the colors of the pluff mud at different times when the tide is coming in, or the marsh grass that has a really bright green color.”

MAKE YOURSELF AT HOME

Looking to add a few Lowcountry accents to your home? Here are a few to consider: