Interior designer, architect and builder all got on the same page to create this spectacular Sea Pines home

The homeowners from Greenville got what they wanted when they hired interior designer Dr. Debi Lynes, architect Rick Clanton and builder Rick Leach: Teamwork with a bold-faced capital T and a showpiece shingle-style home in Sea Pines.

The homeowners insisted on recruiting a talented core team at the outset of the nearly two-year project. They wanted congruity, continuity and consensus decisions — and no surprises.

“I think the key story and the key lesson that someone on the outside could learn from this is the importance of a really good team that plays well together,” said Clanton, a co-principal in Group 3 that he formed in 1986 with Mike Ruegamer. 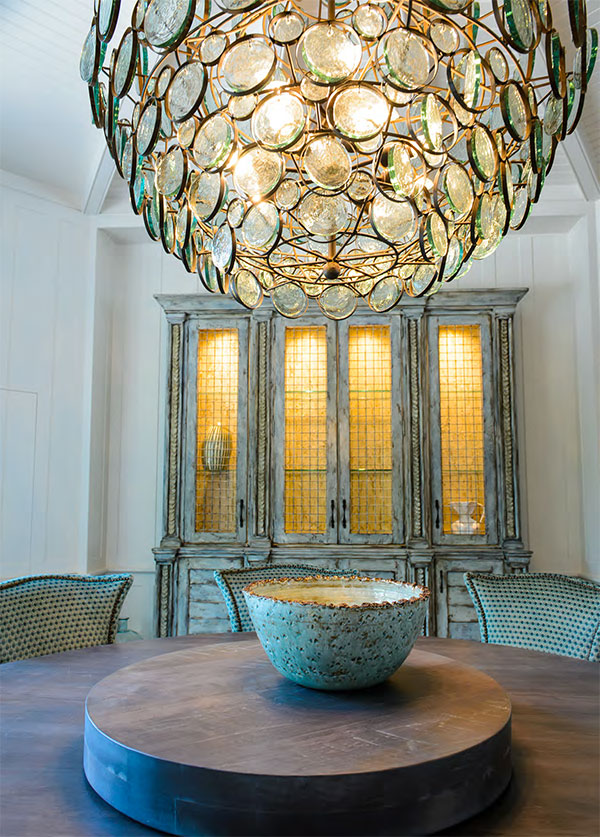 “It’s a gentle house; it’s a dream house for (the homeowners),” said Lynes, a psychologist and owner of Lynes on Design with decades of experience. “The most important thing for them was to create a team of professionals that was creative and collaborative.”

The 6,000-square-foot, five-bedroom, six-bathroom residence is a dramatic testament to what a team who deposited their individual egos on the brick front doorstep could achieve.

“I would echo what Debi said about the team,” said South Carolina native Clanton. “Find a really good team and pick it in advance. Make good choices, put your team together early and keep them together through the whole process.” 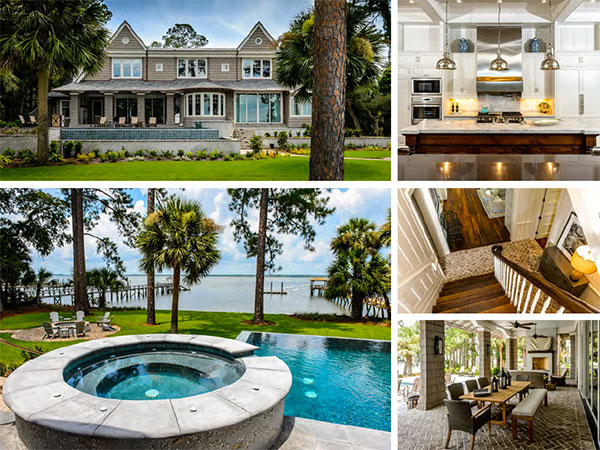 The group bonded and would convene regularly at a standing on-site appointment at 10 a.m. Wednesdays.

“(The meetings) got things done, and we could build an efficient home and not have half of it go on with everybody’s surprise that it ended up that way,” said Leach, owner/president of Paragon Construction on the island, which he incorporated in 1993. “It worked out really well.”

“It is by far the most positive building, architectural and design experience any of us has had,” said Lynes, who shares interior design credits with her business partner, Pat Jackson.

“We would sit around the table, and we would disagree and propose compromises, reject them, and come up with something else,” Clanton said. “Sometimes, we have to go away and come back again. At the end, I think everybody felt like the decisions we made were in the best interest of the house, even if it wasn’t our idea.” 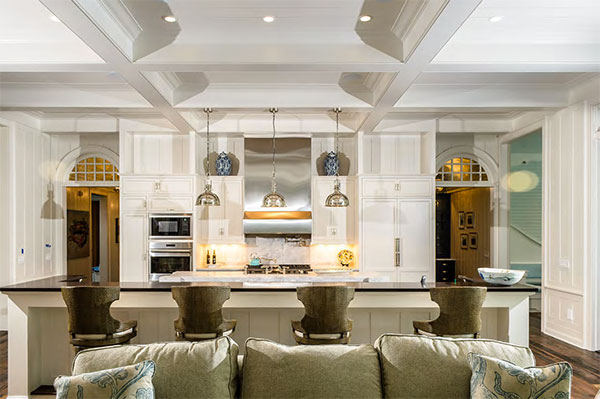 “It was really interesting to watch all of us step up, and back, step up and back,” Lynes said. “At the end of the day, even though we came in with four different points of view, when we ended up agreeing on something, we all agreed on it. It was really fun.”

One revealing anecdote illustrates the dynamics at work between the team players regarding the treatment of the four-sided vaulted ceiling in the billiard room.

“We were all together and had gone through 50 different samples,” Lynes said. “Finally, (Clanton) walked outside, got a piece of bark and said, ‘I want it to look like this.’”

Clanton circled a portion of it to show the group the color he wanted to reproduce.

“Rick was convinced his painter, Paint Pros of the Lowcountry in Bluffton, could do it, but I wasn’t a believer,” Clanton said. “In that moment, I wasn’t sure he was going to uphold his job as a team member.”

Clanton didn’t want it to look like paint. He wanted a wire-brushed architectural-grade cedar look with vertical grains to “make the grain rise up so it looks more rustic, like a hand-hewn beam. But getting the right color on it is an art.”

“He was right, his painter did a great job and matched the little piece of wood that I had circled,” Clanton said. “I was amazed.”

“That’s exactly what happened,” said Leach, who moved to Hilton Head from Ohio in 1984. “We took that little piece, which was really small, and had two or three samples done and had them pick. The funny thing is, these guys have worked with me for 20 years. They’re artists, they know how to do it. The painters always make us proud.”

Leach’s painters wire-brushed the ceiling’s cedar because “it has more texture than rough-hewn and it makes the wood look more like driftwood, something that’s weathered outside. That was the effect we were after,” he said.

A light semi-transparent stain and another layer of color topped off the finish.

It’s safe to say the entire home feels and looks right. It stands resolutely on an oversized 1.2-acre property on South Calibogue Cay Road as a shingle-style Lowcountry home that was built up from the earth up after two other teardowns and incarnations.

“Shingle-style is an American style and uniquely American,” Clanton said of the design that found its roots in the late 1800s in New England.

“(The homeowners) asked the design team to create a Lowcountry home that was welcoming and inviting, where the attention to detail was extremely important,” Lynes said. “They wanted to make sure we took advantage of the natural setting.” 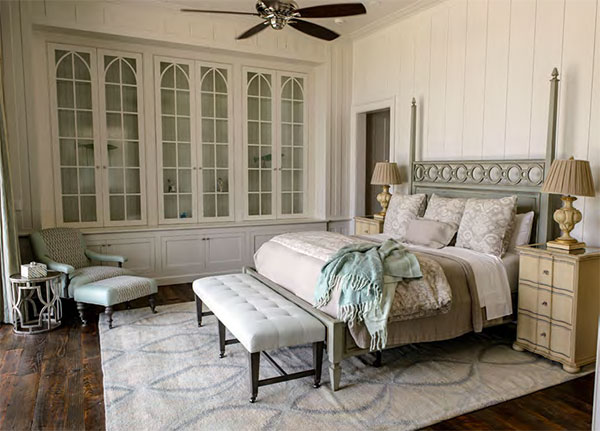 The 169 feet of waterfront, stately pines and live oaks framing the home accomplish that. All major rooms, except for an upstairs bunk room for the grandchildren, face the swimming pool and expansive Calibogue Sound beyond. A multitude of windows serves as the portal.

“We tried to group the windows so it looks plausible that the house could have been built 100 years ago,” Clanton said. “The windows are, for the most part, where they need to be to say, ‘I am a shingle-style house.’”

Inside, Lynes and Jackson tastefully utilized the space, which oozes with personality, comfort and casual elegance. They used a color scheme of sea salt, navy, butter tones and silver white.

“We wanted a palette that would grow old gracefully, and that would be more classic in feel,” Lynes said. “That really defined how we selected the tones.”

“It is a unique home that will be around for a long time,” Leach said. 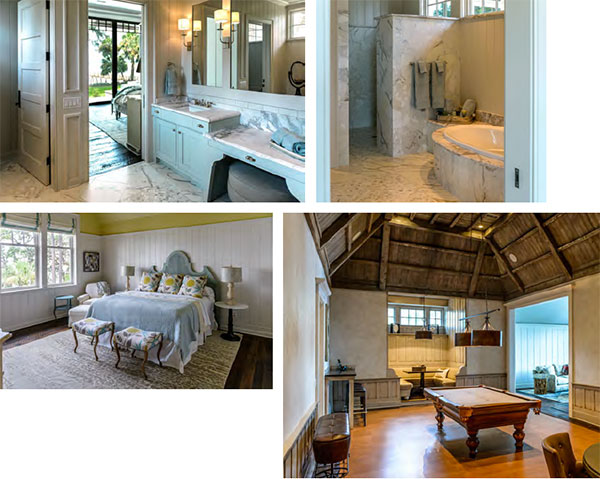 For Leach, the experience was “bittersweet and sentimental a little bit” because it had to end.

“It was great working with Rick, (the homeowners) and Debi,” he said. “Those are the times you remember.”