Just one look, that’s all it took. When Richard and Michelle Warner first set foot on the naturally blessed half-acre vacant lot, saw its 185 feet of Colleton River waterfront and Spring Island outstretched to the north-northwest, they knew their property search was over.

Realtor Kevin King of Charter One Realty had shown them three lots within the gated golf course community in Bluffton. “We took one look at our lot, the gorgeous view and water, and we said, ‘Ok, we’re done,’” Richard said. Both Michelle and Richard are both financial executives in the Washington, D.C., area. 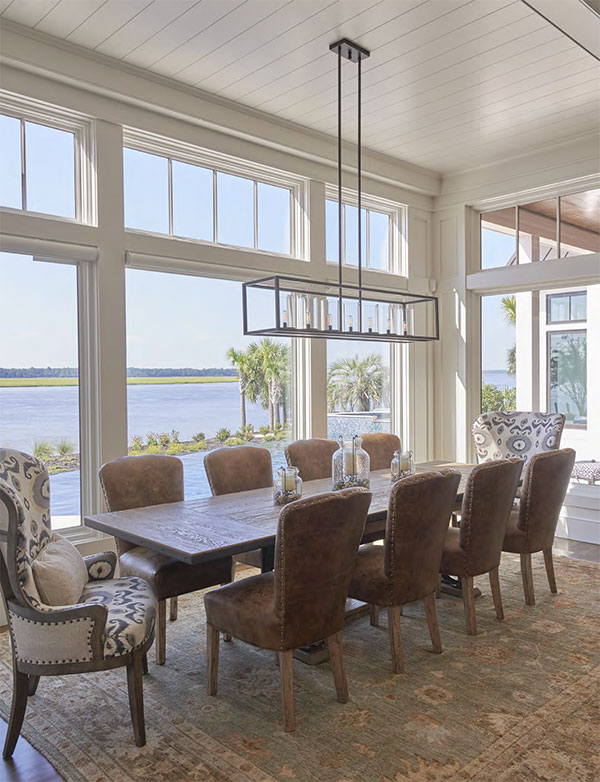 This eye-opening discovery occurred five years ago, and today the Warners’ custom-built main residence on Magnolia Blossom Drive features four bedrooms, a bunkroom, and four-and-a-half bathrooms, which comfortably and stylishly fill the 5,680 square feet of living space. They moved in in February, but kept their apartment near Washington and a cabin in West Virginia.

Originally, the Warners planned to wait a few years before building, but decided to accelerate their timetable. They enlisted the architectural talent of Court Atkins Group in Bluffton, developed a design, and completed the approval process with the Colleton River architectural review board in about 18 months.

The Warners and Nathan Cameron of Cameron & Cameron Custom Homes in Bluffton built a relationship long before the construction of their home. Thanks to his dynamic construction portfolio and vision, Cameron was brought on board as general contractor. Lisa Whitley of J Banks Design Group on Hilton Head and an allied member of the American Society of Interior Design, was hired mid-project as the interior designer. 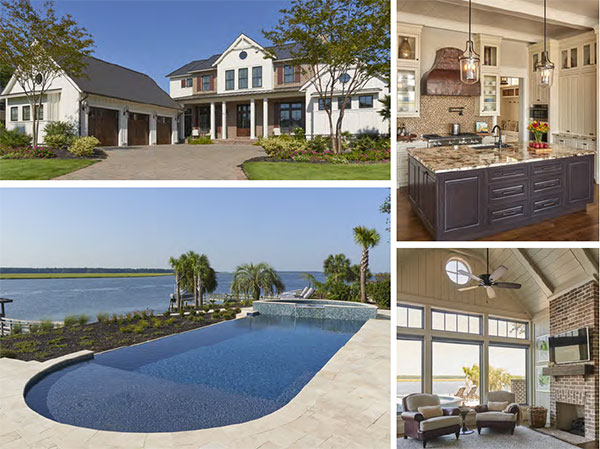 The Warners said they wanted “a Lowcountry home and style with understated elegance and comfort.”  And Cameron delivered, with a dramatic Lowcountry river house flaunting unsurpassed craftsmanship.

“Absolutely everything was custom-built onsite,” Cameron said, with the exception of the cabinetry that was handcrafted by Palmetto Cabinet Studio in Bluffton. “Everything from the built-ins to the beams.”

Perhaps the most splendid example of Cameron’s work was the extensive millwork — the window and door casings, moldings, vaulted, coffered and barrel ceilings, paneled stairways, etc.

“Probably to date, it’s the most millwork in a home I’ve ever built,” said Cameron, who founded his company five years ago. “There’s very little drywall surfaces in the house; it’s either brick or wood walls.” 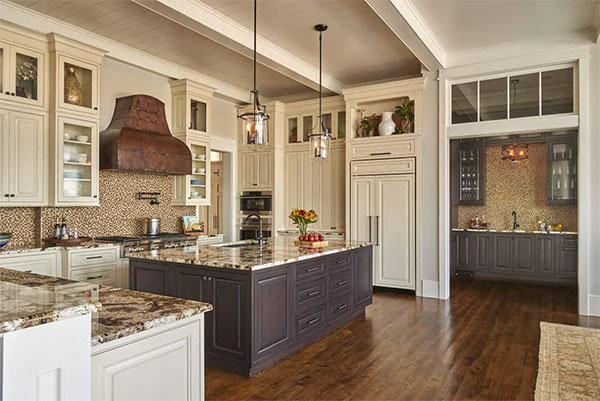 “There is layer upon layer of wood,” he added. “The horizontal wood on the ceilings and walls layered on top of the casings. … Basically, they gave me permission to keep it going on the millwork to create the beautiful Lowcountry elegance they envisioned.”

“One of the reasons we loved Nathan was his use of wood and wood trim,” said Richard, who with his wife has three grown children and two beloved dogs. “Almost every room in the house has some sort of wood or brick involved so we have natural materials. We have brick walls, and a lot of wood like butt board and moldings.”

Every room in the home has its own distinctive personality, none more so than the master suite.  But, it almost didn’t turn out that way.

Midway through construction of the home, which began in September 2014, an enclosed porch was attached to the bedroom. It compromised some of the sightline from the bedroom to the water and just didn’t work visually as designed. So new permitting was acquired, a wall was removed and concrete repoured. The porch was transformed into a cozy sitting room in a vaulted ceiling bedroom, with a custom brick surround showing off the fireplace. Complementing the fireplace is a sold brick wall behind the master bed.

“The master bedroom has its look and feel, like a big barn style, and a beautiful view out the back,” said Richard, a golfer who enjoys playing the club’s two courses. “We leave the blinds open most of the time. I love waking up in the morning and seeing the river.” 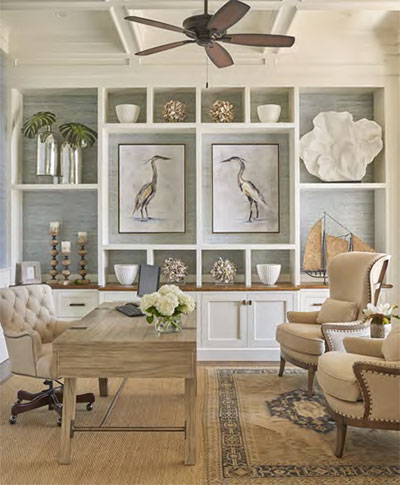 Michelle loves sipping her morning coffee in the sitting room, which is her favorite perch in the home, and relaxing in comfort. A doorway leads out to the deck and infinity-edge swimming pool.  “So, instead of being a porch, it’s now living space,” Cameron said. “I’m so glad we did this. It’s one of the most beautiful rooms in the house.”

Elsewhere downstairs, which is graced with stained white oak flooring throughout, there is the dining room, a richly decorated study off the foyer, a back kitchen with brick accents, a spacious laundry room, a bar area, a “spectacular” owner’s entry, and the great room with a 12-foot-high coffered ceiling and fireplace with a millwork surround.

The powder room received special treatment, as did all the bathrooms. It has a modern twist with a pebble rock wall, wallpaper that is made of horsehair and other natural fibers, and concrete vanities.

“We really tried to upgrade the bathrooms, especially the guest bathrooms,” Richard said. “My wife went a little overboard. She wanted something really nice that would fit in with the rest of the house.”

The kitchen, Richard’s favorite room because he’s the family chef, stands alone in its splendor.

“We built the kitchen around the hammered copper range hood,” Cameron said. Whitley said she incorporated the hood’s color with other design elements, such as the leather chairs in the dining room and the ottoman in the living room. 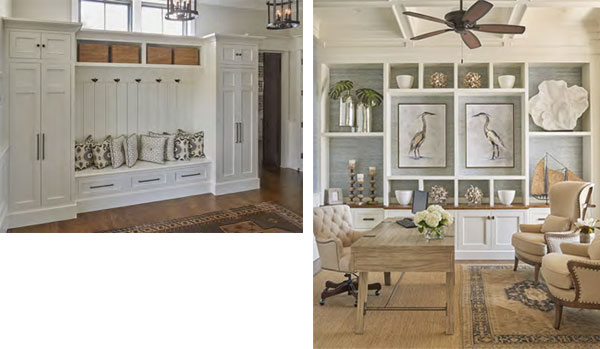 “We used rich color tones like bronze, copper and mahogany and coupled it with very clean neutrals,” she said. “Nothing is a harsh white or stark. We also used a lot of textures.”

The striking custom-made cabinetry, glass and mosaic marble backsplash, and granite countertops lend a sophisticated air to the kitchen.

Glass and more glass of all sizes in the main indoor rooms usher in the sunlight and the water views. 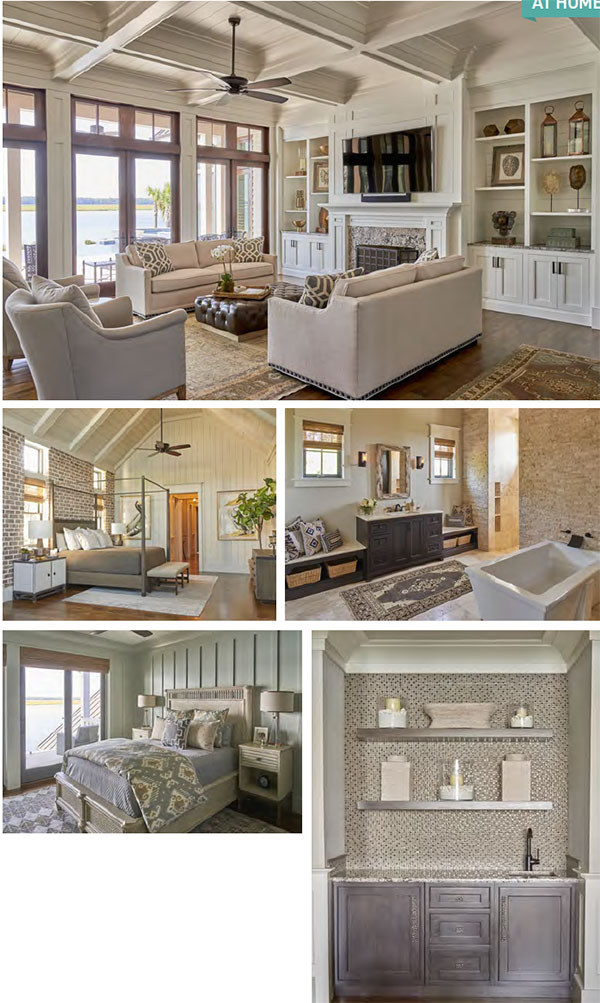 Upstairs, there’s a junior suite, a centrally located sitting room with a big-screen television, and another guest room, all with access to the open-air balcony. A clear half-inch structural plated glass railing ensures an unobstructed river view.

“The homeowners wanted it to feel coastal, but not coastal in a way you would typically see,” Whitley said. “A lot of times you’ll see light pastel colors, but we did not do that. We tried to bring coastal out with textures and very rich tones, and I felt we accomplished that. Their style is very clean, not formal at all.”

As Michelle says, “When you walk into our home, you feel like you have a warm heart.” If home truly is where the heart is, then the Warners are in the right place.