Many, if not most, people move to the Lowcountry to retire from the Northeast or Midwest and alter their lifestyles.

Stuart and Cathy Malone had a somewhat different life plan as they edged toward retirement. They didn’t want to change their lifestyle or slide from their comfort zone of living; they just wanted to downsize and move south to more temperate weather. 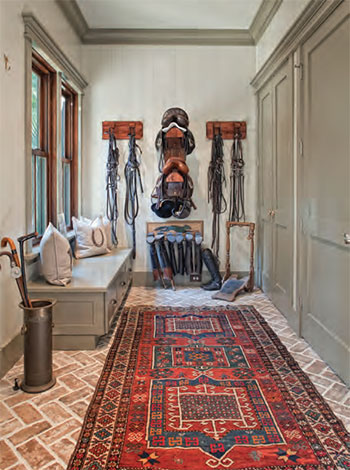 After flirting with other coastal communities in the late 2000s, the couple settled in Palmetto Bluff on a 1.25-acre waterfront lot in the May River Forest.

They enlisted the design talent of architect William Court and his team, Court Atkins Group, in Bluffton in 2010.

“They were looking to transition to spending more time in the Lowcountry and making Palmetto Bluff a primary home for them, but they wanted to do so over time,” said Court, a partner in the firm that he founded with James Atkins in 2004.

“We brought two horses down to see if we liked it,” said Cathy, a New York native and lifelong equestrian and racehorse trainer. “We had a great time, so we thought, let’s start with a guest house.”

They were expecting to take their time making the transition.

“We were on a five-year plan,” said Cathy, who also plays tennis and golf. “It’s now a two-year plan,” she remembered thinking in 2011, while the carriage house was being constructed on the property.

“The first phase became sort of dipping your toe into the experience of Palmetto Bluff, spending some quality time there, having just enough amenities within the carriage house that they could feel comfortable on an extended stay,” said Court, a University of Cincinnati architectural graduate. “They had a life plan that was orchestrated from day one.”

Cathy and her husband, a real estate investments executive, sold their expansive horse farm in Pennsylvania with 22 horses, but kept the ocean-view summer home they built in Maine six years ago. 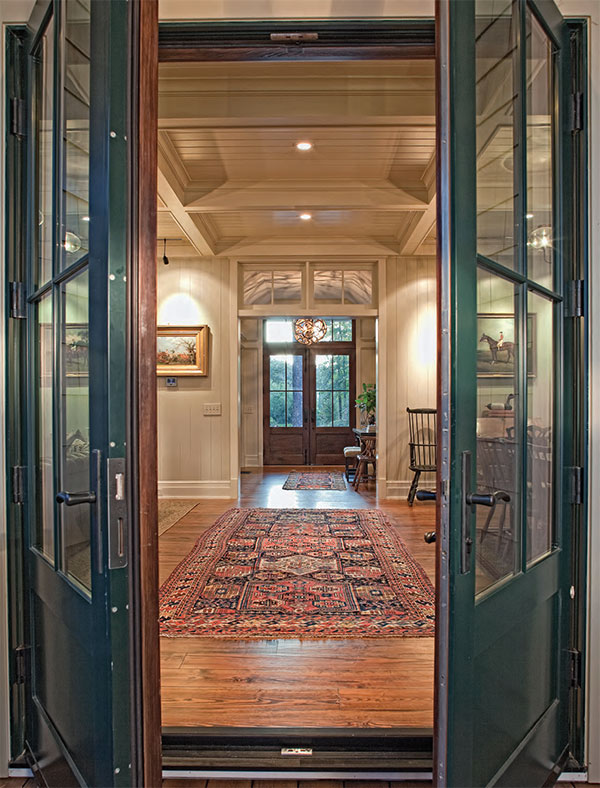 As Court drew up the design plans for the carriage house, he had to “strategize where the main house was going to be. It was obviously going to get the primary river views, so we angled it on the property to get the longer views of the May River and to work within the canopy of the existing tree coverage.”

After the active couple settled into their temporary quarters, Court put his creative ideas to paper to design the main residence, keeping in mind “where they hailed from, their history and what Palmetto Bluff is all about.”

“This is a Lowcountry, coastal, shingle-style home,” he said. “So we actually blended our favorite timeless Southern Lowcountry details with elements of a Northeastern corridor shingle-style home that would have been reminiscent of their previous neighborhood.”

Court teamed up with a familiar partner, Genesis Construction, to bring his vision to life for the Malones. Owner and president Bill Mischler refers to the collaboration as “a dream job,” not only because the family was living onsite and was extremely accessible, but also because of their engaging personalities. “The back-and-forth conversation shared by all parties involved allowed us to develop lasting relationships that were based on genuine trust in each other,” he said. 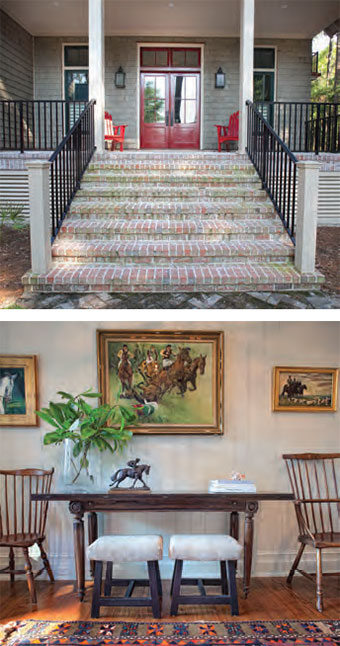 Mischler has partnered with William Court over the years for the construction of 10 homes, most of them in Palmetto Bluff. “Court Atkins Group’s strengths are their communication and project management,” he said. “This was apparent as we worked to accommodate the Malones’ wish list and construction schedule for their new Lowcountry address.”

Striking visual details flourish inside and out of this cozy, rustic and highly livable 3,500-square-foot home with two bedroom suites upstairs and two-and-a-half bathrooms overall. 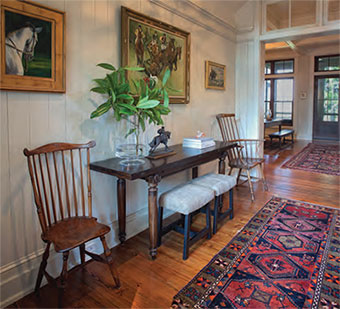 “Those are all things that are right in the wheelhouse of the Southern Lowcountry feel,” Court said.

A pressure-treated wood pergola stretches from above one of the garage doors and “creates a shaded shadow play and allows for plantscapes or a fig vine or jasmine to start growing up the sides of it,” Court said.

Out back, a partially screened porch extends nearly the entire home’s width with a grilling station as the preferred amenity.

“The homeowners are active in their landscape, so they were very interested in views and clearing and maintaining the natural landscape,” Court said. “They wanted this to feel very much like it belonged in Palmetto Bluff, so they used native plant materials.”

If the exterior of the home hints of Northeast style with river replacing ocean views — and it does — the inside looks like the couple’s old farmhouse in Pennsylvania. After all, except for two sofas, all of the furnishings, sporting artwork, area rugs and memorabilia from the farm fill their Palmetto Bluff home. 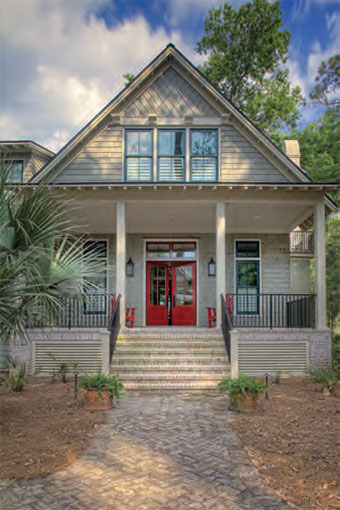 “Stuart and I built the place because we wanted to be comfortable,” Cathy said. “We didn’t build it to be a showplace. It’s not interior decorated to a T.  It’s what we love and how we live and we are just so comfortable there.”

“The kitchen is centrally located between the two of them and literally has C-shaped peninsula countertops, so it is completely open,” Court said. “You can see the keeping room from the dining room/great room and vice versa … plus the water views.”

The countertop that wraps around the center island defines the edges of the kitchen, as does another special touch that Court added.

“We used the distressed Savannah gray brick work and the reclaimed pine beams to separate the kitchen from the other two spaces with more of a visual demarcation rather than a barrier or wall separations.”

There are no overhead cabinets in the kitchen, only lower cabinets for displaying wine bottles and platters for entertaining. The large back kitchen with an island serves as a pantry and storage area. 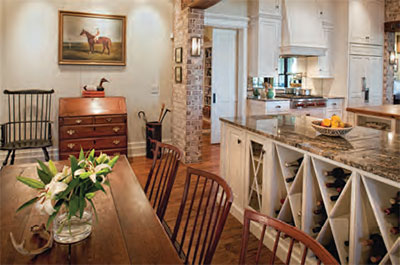 Elsewhere, each room displays its own personality, with different heights and materials for the ceilings and strategically placed beams and transoms. A mud room/owner’s entry doubles as a tack room for Cathy.

Contributing vendors agree various other features contribute to the quality design of the Malone residence. “While teaming with Court Atkins Group and Genesis we installed darkened bronze fixtures with flickering bulbs to complement the traditional, authentic style of architecture,” said Becky Brackett, owner of The Light Post in Bluffton.

Howell-Chase Heating and Air installed a top-line heating and air system at the Greenleaf address. “When working with Genesis Construction we’ve found they prefer the most highly-rated equipment available,” said Howell-Chase’s Matt Wilhite.

The Malones, who have four daughters and six grandsons, are life-loving, “down-home” people, she said. 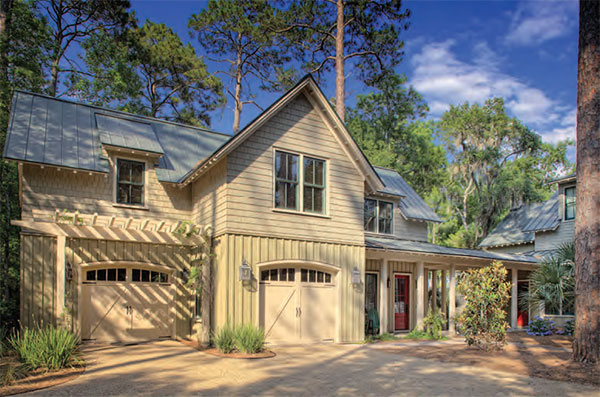