Tucked away beneath towering pine trees and marshes that straddle both sides of the private road and residences, Gull Point in Sea Pines rests comfortably undisturbed. Only a biting breeze on a cool late winter’s day breaks the calm in this upscale residential community. 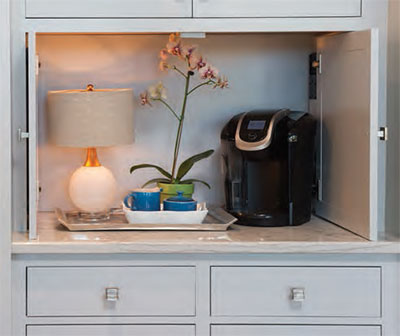 Behind the closed doors of Gregg and Shannon Alford’s home on Gull Point Road, a long stone’s throw from South Beach Marina, however, life is different. With three children ages 8 to 13 and two active dogs, movement, voices and playful barks are as common inside as an egret wading steadfastly in their sweeping backyard marsh is outside.

Lowcountry life is good for the Alfords, and it was made even better after extensive upscale remodeling of their five-bedroom, six-and-a-half bathroom, and 4,500-square-foot home.

Hilton Head builder Brian Quinn, owner of Twelve Oaks Group, was enlisted for the remodeling and other projects. Hannah Fulton, an interior designer who has been on staff at J Banks Design Group for 13 years, was called upon to work her professional magic blending the old with the new.

“This reflects our family, bringing it all together,” said Shannon Alford, a Tampa native who, with her lawyer husband from Charleston, has lived on the island for 21 years. “I love that it flows, because my family is in constant movement, including the dogs.” 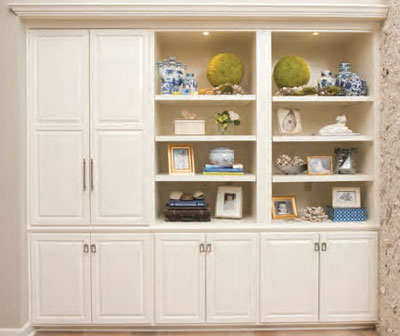 “We came into a home that was, sort of, compartmentalized,” which was the preferred design style when the home was built in 1990, Fulton said. “It wasn’t an open floor plan. So we had the challenge of decompartmentalizing a formal dining room, a formal kitchen, a formal living room and a breakfast room. The family likes wide-open spaces. They would have torn down every single dividing wall if they could.”

Quinn and his team did nearly exactly that. They demolished two walls between the kitchen and dining room and between the dining room and living room. The old kitchen and old dining room were transformed into a state-of-the-art kitchen that doubled its original size. What was a den adjacent to the kitchen is now the dining room. The living room, with a 15 1/2-foot-high vaulted ceiling, wasn’t changed much except that the new version possesses a “free-flowing space,” as does the rest of the downstairs.

“We basically took the 1990s out of the house and made it more modern,” said Quinn, who founded his company eight years ago. “So it went from traditional to transitional.”

Fulton agrees: “It’s now a sophisticated coastal home, casual and rustic with a refined feel to it. It’s a transitional style. We made it beautiful and yet functional.” 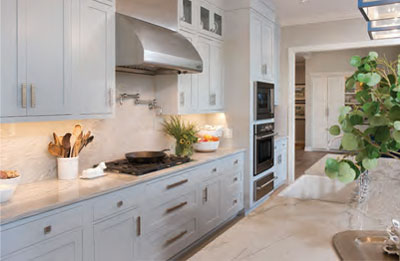 Fulton, who interior designed the Alford’s previous residence on the island a few years ago, added, “It’s not all fresh and new; there’s a character and richness.”

A blue-and-white Blue Willow chinaware set that has been in Shannon Alford’s family for generations anchors the dining room visually and blueprints the color scheme throughout the newly designed home. A newly purchased white china hutch was painted a royal blue to showcase the collection.

“Hannah took it and ran with it,” Shannon Alford said.

“Shannon loves blue and white,” Fulton said. “(The china) was a natural color palette to follow. The idea was to use that as a base and to grow it and add some different colors and different textures so it wasn’t just flat; different tones, different blues, oriental greens, natural and organic with a sophisticated feel.” 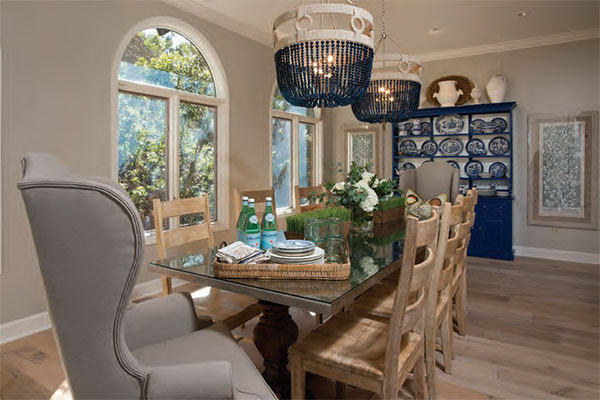 Large area rugs in shades of blue from KPM Flooring in the foyer and living room, blue-accented furniture fabrics in the living room, blue-hued vases above the fireplace and a blue textured ottoman in an indoor/outdoor fabric for durability carry the color theme forward. Fulton also positioned a new leather sectional sofa in front of the fireplace and an older wing chair in the sitting room that was paired with a new piece with matching upholstering.

Also in the living room, a reclaimed wood beam hundreds of years old sits atop a custom-designed tabby fireplace.

The masterful kitchen occupies center space between the living room and dining room, with an unblemished sightline between the three rooms — and to the outside deck, swimming pool and outdoor working kitchen. 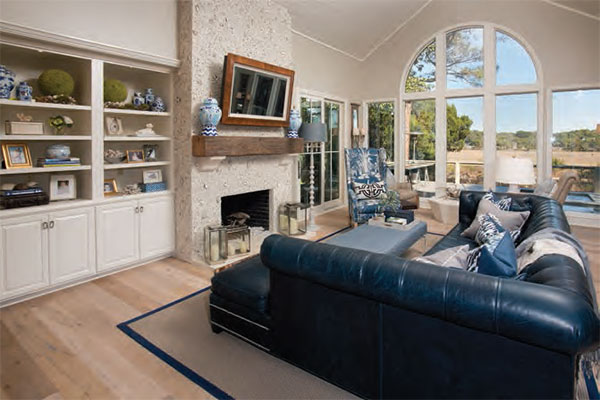 “I love the way the kitchen island turned out,” Fulton said. “I think it’s the heart of the family. It’s a very utilized space.”

The large center island, topped in granite from Distinctive Granite & Marble with “lots of movement,” extends to the countertop and backsplash. New blue and gray pendants drop from the ceiling to illuminate the upscale appliances supplied and installed by Play and Gourmet in Bluffton.

“The Alfords are a very busy family,” said general manager Jeremy Press. “They do a lot of traveling and family events, so we wanted to make sure we put together an appliance package for them that was both functional and would work with the clean design that Hannah had worked with them on the kitchen.” 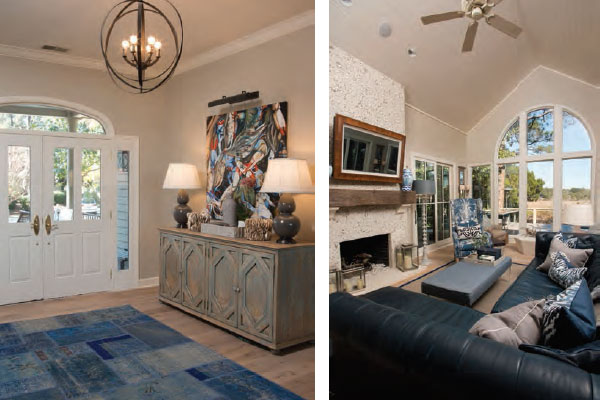 Play and Gourmet succeeded. All of the appliances are straight-lined and built by hand. In the kitchen are a handful of DCS products: a five-burner, 36-inch cooktop; a professional overhead range hood; a confection microwave; a wall oven; a set of dishwasher drawers and an ice machine by Perlick. The fully integrated panel refrigerator is by Liebherr.

“Every single burner on their cooktop handles boil and simmer,” Press said. “Whether they’re using one burner or five burners, they all have the same high-level productivity. All of the appliances are upscale, high-end performance at a mass-premium budget.”

Fulton also repositioned a handful of colorful oyster plates Shannon Alford had collected through the years on the primary kitchen wall, along with a wooden step ladder from her childhood home. 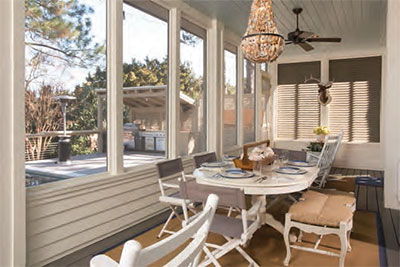 A few steps away in the dining room, a glass-topped table layered in stainless steel atop a stained antique wooden trestle base exudes an old and new flair of sophistication. Antique-styled chandeliers complement the room.

Elsewhere downstairs, new stained-oak flooring stretches across the entire living space, sliding barn doors made by Quinn from the material pallets for the driveway hide a “charging” room and a small office. “Grash” paint on the walls is adorned with a masterfully displayed crop of personal photos that converge with a carpet runner up the stairs to the second floor.

Fulton had her artistic hands in every room of the house, from bedding selections to window treatments.

Quinn flexed his considerable professional muscle by doing the trim details, painting, renovating the back porch and adding the custom deck, installing a bar and building the outdoor kitchen, installing a dog run beneath the deck, re-landscaping the property and redoing the driveway.

“We were guided by Hannah’s design,” Quinn said of the LightHouse Award-winning home for his company’s work. “She really is the reason why it looks the way it looks.” 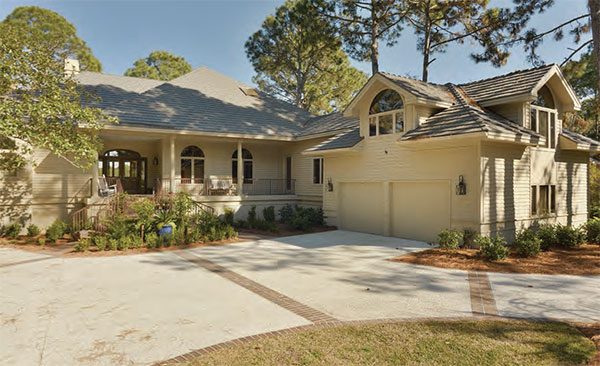