Lowcountry home design has evolved much like the history of the South Carolina coast itself in population growth, economic forces, cuisine and culture. Naturally, adaptations to original home designs had to be made — and they were.

Its infancy began when the first permanent settlement in South Carolina took root in 1670 along the Ashley and Cooper rivers near present-day Charleston. The English transplanted their basic one-room cottage design from coastal tidewater Virginia and Maryland locations, and that marked the beginning of Lowcountry home design. 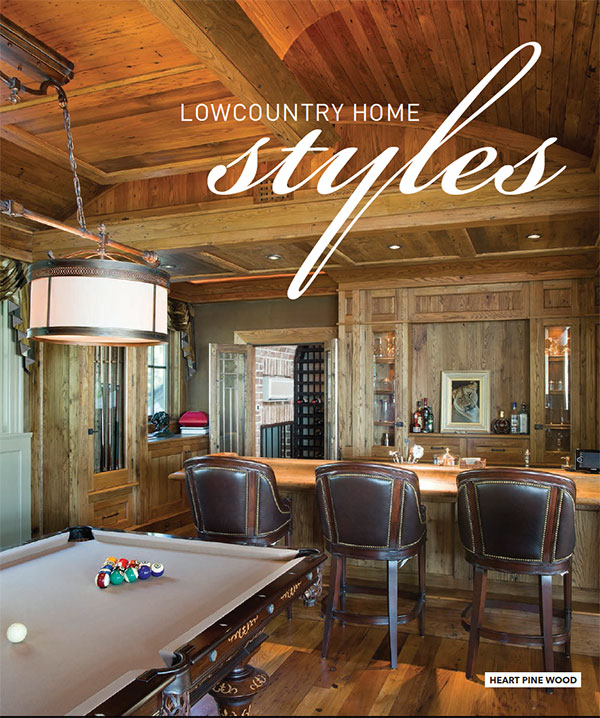 In the ensuing six decades, waves of European settlers from England, France, the Netherlands, Germany and elsewhere dug into the South Carolina backcountry. The tried to pay deference to the architecture in their homelands, but the lack of natural materials and the harsh Southern climate dictated adjustments to their simple home design plans.

One of the first concessions made to the hot, humid climate from Savannah to Charleston was building homes over crawlspaces or on piers to thwart coastal flooding and to allow air to circulate from underneath the home. Numerous double-hung windows opened at the bottom (to let cool air in) and top (to let warm air out) for temperature control, and large wraparound porches faced south, shading the interior from the blistering summer sun during the day. High ceilings helped push the stifling heat upward from the living space. 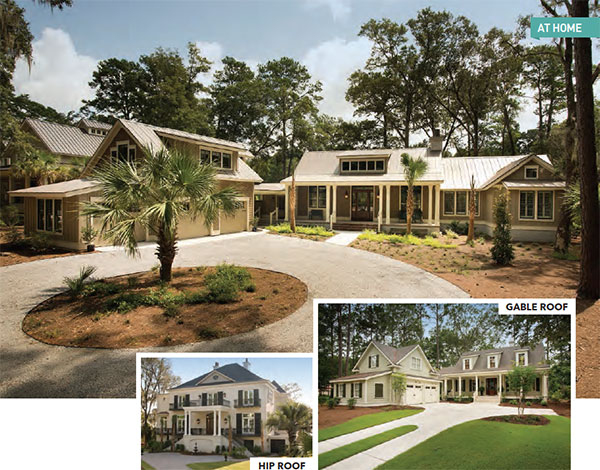 Many of the practical adjustments made in Lowcountry home design beginning in the late 17th century are signature elements of Lowcountry homes today.

But make no mistake in thinking there’s only one design style of a Lowcountry home. There isn’t. There are formal, informal, cottage, farmhouse, contemporary, tropical and one- and two-story floor plans.

Hip roof designslopes down to the eaves on all four sides, forming a horizontal ridge at the top that is often vented. Many hip roofs have dormers or connecting wings with gables. Because of their design, hip roofs provide additional living space for an attic or vaulted ceilings. Gable roof design features two dual-pitched sides sloping inward that create a ridge at the top and form a triangle where the siding rises to meet the roof (picture an inverted “v”). 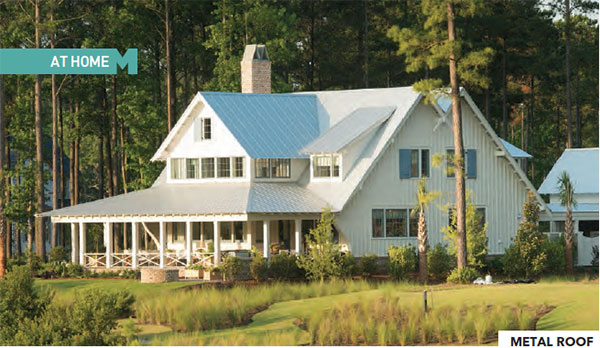 Metal roofs of aluminum, steel and copper have been a material of choice for years for their durability (they have a lifespan of up to 50 years). They’re also favored for their resistance to weathering (especially their resistence to the salt in the Lowcountry air) and wind erosion, both of which degrade organic and composite materials. Besides its low-maintenance and versatility in shingle patterns, metal roofs resist thermal expansion. Metal roofing, which is sustainable, comes in a large palette of colors and granular coating with a heat reflectivity rating as high as 90 percent.

Symmetrical double-stacked front porches shaded by live oaks, a quintessential and traditional Lowcountry design, are abundant in downtown Charleston, along Bay Street in Beaufort facing the river (the Rhett House was built in 1820 and the antebellum Cuthbert House in 1790 in the historic district), the quaint small village of Habersham near the county seat, current-day Palmetto Bluff and, of course, downtown Savannah.

Built to capture the cool coastal breezes and waterfront views wherever possible, homeowners hosted social engagements with friends and neighbors, enjoyed casual light dining or afternoon tea. Ideally, the porches faced south to escape the sweltering summer heat and to heat the home in the winter light. The first settlers here paid homage to the Palladian architectural influence adopted by England in the early 18th century. Multiple large, cylindrical front-porch columns stretching from floor to ceiling were both aesthetically pleasing and structurally necessary, and are seen in abundance today in the greater Hilton Head area. 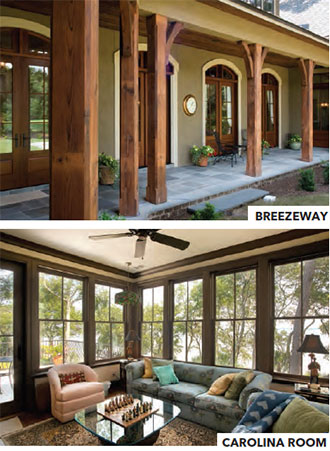 Open-sided roofed breezeways usually connect the main residential home with smaller secondary buildings such as a garage or guest cottage to allow refreshing air to circulate throughout, for overhead shelter from nature’s elements, for guest entry, for outdoor living space and for providing a swift escape for unhealthy air pollutants emanating from other buildings. A “dogtrot” house on the American frontier and in the Carolinas in the early 19th century featured a centrally located open breezeway connecting two living/working areas of a double log cabin or home, all covered by a common roof. Select doors in the cabin would open up to the breezeway.

Carolina rooms have been a popular architectural detail on Hilton Head since the founding of Sea Pines Plantation. Enclosed casual comfort, plenty of sunlight, views of the golf course and lagoon, floor-to-ceiling windows on all three sides, and an open living space with easy access the main home make Southern living easy.

Elevated first floors raised on piers or above crawlspaces originally were constructed to avoid coastal flooding and tidewaters and to circulate fresh cool air from below. Lattice siding to the open space is often used for cosmetic and practical reasons. On Hilton Head, for instance, construction codes require that the lowest floor in new home construction in a flood hazard zone be built no lower than base flood elevation (based on 100-year flood evaluation).

Many other Lowcountry home design details have a long history along the Southeast coastal areas and are prevalent in today’s architecture:

Signature Lowcountry design elements are as common as Spanish moss dripping from massive live oaks. Our residential architectural lineage is a “living history” and a grand testament to the preservation of a distinct Lowcountry lifestyle.