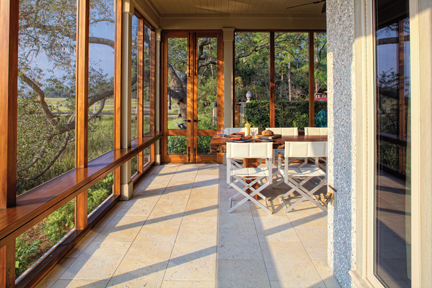 The home was demolished. What was put up in its place is helping to redefine what a home can be. 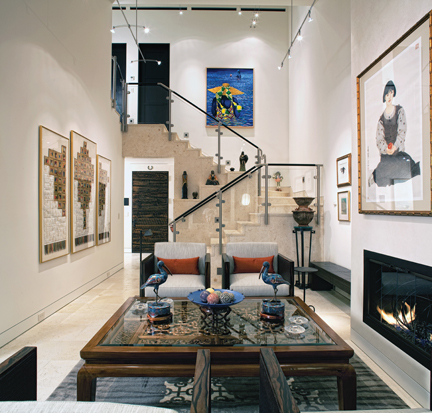 Constantino’s and Rosser’s task was the epitome of duality: The owners wanted their new home to blend in with other homes in the community yet possess its own identity, the living spaces were to be modern yet comfortable, and the landscaping was to be hand- in-glove with the surrounding natural beauty of Sea Pines. But that’s not what makes this house so special.
The owners had another interesting caveat. They wanted their home to bloom “green” wherever possible. Sustainable alternatives, energy conservation and cutting-edge technology were mandated, though without being ostentatiously obvious. Bay 10 Ventures was able to “secure a high Leadership in Energy and Environmental Design ranking, ultimately reaching the platinum level,” Constantino said. “The project also was just recognized by the Lutron Company for the Best Green/Energy Project. This was awarded at the most recent Custom Electronic Design and Installation Association convention.”
This included an environmental control system that monitors, measures and controls energy use; a sophisticated Lutron lighting dimming and shade control system geared towards maximizing efficiency in the home’s windows, shades, lighting and fans; an underground cistern that captures rain and runoff water; and a state-of-the-art irrigation system that pinpoints watering spots.
We aren’t done yet. A system of solar hot water panels provide the energy for the home’s water heater and the hydronic floor heating. Any heat left over is piped to the community’s swimming pool. High-efficiency propane boilers provide heat-source backup for the water heater. 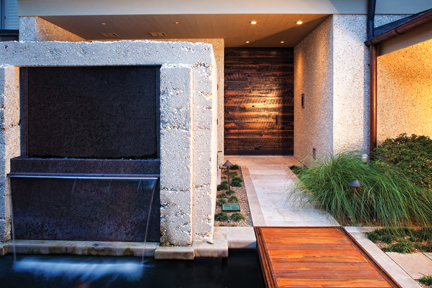 Much of the lighting design makes use of the latest LED technology, Constantino said. Cabinetry, millwork materials and interior finishes by Marshland Millworks and Cabinetry were selected for their green attributes. The accent wood used for the exterior detailing is reclaimed old-growth, “sinker” cypress, and the entry door is constructed of reclaimed oak barn siding.
And to have a little more creative fun, the owners and contractors formed and cast the service yard walls and entry fence with an interpretation of the indigenous oyster shell tabby construction.
“The service yard incorporates two water features that are interesting unto themselves, as well as oxygenating the koi pond and masking any air conditioning sound emanating from the service yard,” Constantino said. “The koi pond is spanned by a sinker cypress curving bridge, which incorporates some interesting lighting effects.”
“We developed a very pleasant and productive team atmosphere as we moved through the detailed decision-making” Costantino said. “It was a very evolutionary process.”
The metamorphosis obviously was a success—this amazing Baynard Cove home was recently awarded the Hilton Head Island Home Builders Association’s Lighthouse Award for construction excellence and quality.