The main house – there is a detached two-car/golf cart garage with an upstairs guest room – is all on one level, a 2,400-square-foot space that feels much larger because of the high ceilings and openness of the great room.

On entering from the porch, visitors find themselves in the kitchen, family and dining room – a space designed for free-flowing living without the confinement of walls or partitions.

The entire home has hard pine flooring, and early in the planning stage, the owners purchased about 1,200 square feet from a company going out of business in the upstate.

“They knew we sold it, so we provided the rest of the hard pine flooring as well as the ceiling beams,” said Pat Strimpfel, chief operating officer of Bluffton master builders Reclamation By Design.

“Most of the materials we get are from old textile mills in the South,” Strimpfel said.

That sat well with the owners, who have strong family ties to the mills. The unfinished beams in the great room show their age, an effect Strimpfel says cannot be easily replicated.

Large windows along the back wall look out into the yard. When realizing that they needed a place for their well-used grand piano, the owners chose to close in what was to be an open porch. The decision resulted in what they called a “happy accident,” allowing them to fulfill a wish to have a portion of the home appear as if it had been added on.

With the piano poised for performance at one end of the former porch, the dining furniture was then moved along the windows, giving diners an almost-uninhibited view.

The change has since been repeated by Thomas Hiatt architects which worked very closely with the owners.

“They wanted a very unique plan and they didn’t really want a traditional house, just two bedrooms,” said Thomas Hiatt. “Taking the rear porch as enclosed space to make it look like it was added on is something which we have since done several times.”

Hiatt said everything in the house has a purpose and a use.

“They decided against an office and instead expanded the hallway to include a study area and turned what was a wasted hallway into a functional space,” he said. “We were able to go into directions that resulted in a very unique plan.”

The owners’ plan on this being their permanent home and worked with their entire team to plan for the future. That includes the master shower, built with the owners plan to age in place in mind. It has no lip on the floor, making it wide enough to accommodate a wheelchair.

“We want to build new homes with the best technology and materials while making everything esthetically functional,” Strimpfel said.

Cabinetmaker Mark Reichert, owner of Mark of Excellence, had a major role in turning each of the rooms into a comfortable yet functional space. Throughout the home are custom-built shelves, cupboards and vanities. The hallway office wall has a built-in space that holds an old post office mail slot cupboard. Around the corner is a bunk bed hideaway for young guests with a small TV cupboard opposite the beds.

In the guest room, Reichert built and installed an armoire flanked by drawers. In the butler’s pantry and kitchen – in addition to the many cupboards - open drawers roll out and shelves offer space for baskets holding linens and other light goods.

“I just love doing cabinets. Probably the most challenging part of this job was the sheer volume. I did everything, cabinet-wise,” Reichert said. “Probably the most fun was the kitchen, with inset drawers. It’s a very cottagey, very Lowcountry look.” 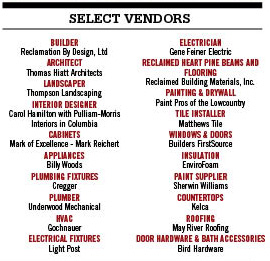 The guest room above the garage can sleep four and provide for basic needs with the kitchenette and bath. A child-size nook contains a bed ready for grandchildren and closets have enough space for luggage or decorations.

The owners’ entry from the garage brings family into a mudroom complete with shoe shelves and coat hooks. A tiny bathroom holds a retrofitted antique vanity that is made complete by a small round basin, a tap that extrudes from the beadboard wall and a repurposed tin panel from an old courthouse that now holds an antique square mirror.

“People are looking at living in a smaller, more practical space for many reasons, including leaving a smaller environmental footprint,” said Strimpfel. “These owners are about reutilizing and repurposing materials and accessories and they are constantly on the hunt for more.”

Those are only a few of the new-old touches in the house. The kitchen granite countertop has been honed, said Strimpfel, taking off the high gloss that appears on most granite counters.

There are also many surprises in the home, details that may not have been discussed but resulted in a wonderful sense of oneness. Perhaps it is because, as Strimpfel said, her husband looks at every home they build as a work of art and builds it as if it were his own home. The architect might agree with that assessment.

“Probably the neatest feature in the house is the transoms over the doors. That works with the high ceilings. However, the ceiling over the owners’ entryway drops,” Hiatt said, “yet it looks as if that transom has glass, too. Really, the transom is mirrored. That was really the builder, making the look consistent.”