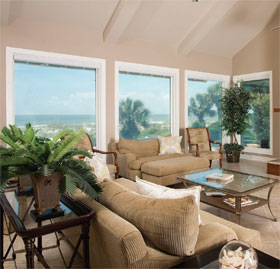 The Beckers went for the latter option, contacting Gene Wilhoit of JAS Construction to upgrade their beachfront home with spray foam insulation to lower power bills while also taking a lesser look at minor improvements to the kitchen and upstairs master bedroom. Almost a year later, the family is finally settling into an almost completely renovated “super v home” that proves how improvements can help ensure a major investment. And it’s surely been an adventure for all concerned. 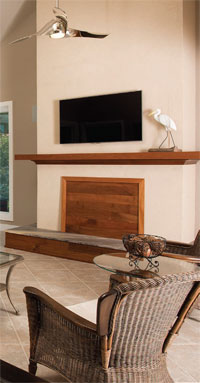 First came the spray foam project (about $25,000) geared at making the home, built in the mid-1980s, cheaper to maintain by sealing off outside air and improving internal air flow, cutting out dust and invasive critters while also creating a clean and useful attic storage space. Instead of relying on an eightton cooling system, the home located off Mooring Buoy Road in Palmetto Dunes can now get by on just a two-ton system (with backup) that is sure to cut monthly energy bills.

“Their power bills should be about 75 percent lower or I haven’t done my job,” says Wilhoit, who drew on his 25 years experience, thermalimaging technology and expert help from learned outsiders to guarantee a solid spray foam seal. “Today, new homes are being built to be energy efficient but the older homes here obviously weren’t built to the same standards. If you don’t have a good barrier between outside and inside air you’re losing a lot of money every month.”

But that was just the start. When conversations turned to more aesthetic improvements, Wilhoit suggested a meeting with his wife, Jackie, who runs her own self-named interior design firm. “They were just going to remodel a bathroom and the kitchen,” she says, “but we made a personal connection and after a couple of meetings with Gail (Becker) we began to work on new cabinets, counter tops, colors and fabrics.”

“Fortunately this was a house with good bones to begin with and that made a big difference,” notes Huggins. “We were able to basically gut the place and do an energy update and a remodel that will last them a very long time. It’s wasn’t cheap but it’s going to be a worthwhile investment for them.”

Yet the Beckers weren’t finished. They installed a metal roof that’s hurricane rated – a rarity for the Lowcountry – that substantially lessens annual insurance rates. New sun-reflecting windows were added along with an LED lighting system to further reduce energy costs.

“You can turn on every light in this house and probably be running the equivalent of a couple of light bulbs,” says Gene Wilhoit. “No matter how they try to burn energy there’s just not much needed to begin with.” 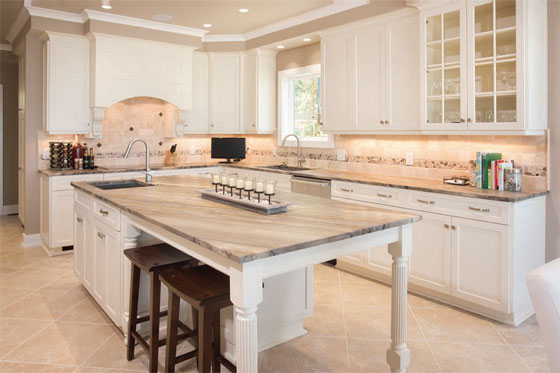 New energy-wise appliances came into play as well as softhued paint jobs and subsequent updates to every room in the 3,700-square-foot house that features three bedrooms, an office and well-equipped bathrooms for each of the Becker Family’s trio of almost-grown girls. The Wilhoits and a crew that often swelled to doubledigits set out to complete work before summer vacation began but didn’t make it — understandable considering the everexpanding scope of the project.

The entire family arrived in mid-July and couldn’t be happier, even as exterior work continues on a covered four-car garage, revamped front entrance and impressive oceanside pool area that will feature cool-touch decking for added comfort. “This is a completely new house,” says Gail Becker. “It’s so much more quiet and comfortable, even if we didn’t think of doing all of this initially.”

“We now have new options,” says husband David Becker, a venture capitalist who envisions a future that finds at least part of the family settling here fulltime someday. “Our girls are growing up, and down the road this could end up as being our main home. It’s been work but we’re getting what we wanted,” he adds, praising the Wilhoits and hinting that the cost of the ongoing retrofit is approaching seven-digits.

Homeowners with understandably lower budgets can take advice from JAS Construction boss Wilhoit, who recommends an inspection that focuses on insulation and indoor air quality for starters. And if that’s too daunting to consider, remember this: “Caulk is your best friend.”