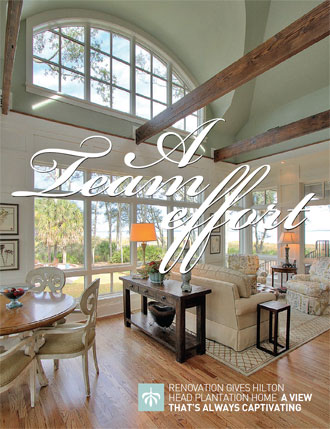 In the beginning, there was a large unspectacular home perched on a spectacular waterfront property on the northern tip of Hilton Head Plantation.

Beyond the rambling backyard of that nearly 5,000-square-foot home built in 1989 stretched more than 200 feet of private pristine waterfront facing Port Royal Sound and a lagoon offside straddling the sixth hole at Oyster Reef golf course.

There was only one small problem with this Lowcountry piece of paradise: There were limited views of nature’s splendor from anywhere inside or outside the home.

All that changed over a 14-month period of renovation in 2012-13 when the homeowners, architect James Ogden, builder Old World Custom Homes and interior designer Kay Buck put their collective talents and visions together.

“We got a house with the property,” said homeowner and retired investment management executive David Tierney wryly from his permanent residence in Illinois. “It is a beautiful location and a beautiful piece of property.”

Tierney has local agent Howard Davis of Charter One Realty to thank for showing he and his wife Donna the ¾-acre site in 2011 when the couple wasn’t even scouting the market. Davis thought the Tierneys might at least be interested in taking a look at the glistening waterfront and its potential. He was right. The Tierneys bought the property — and the house upon which it sat.

Now, with a seamless expansion of the home to 7,000 square feet, plus another 2,000 square feet of outdoor living space, direct water views are showcased from every major room in the residence except an upstairs bedroom and the library. The newly built kitchen and adjoining sunroom in the rear of the home allow the homeowners and their guests to enjoy sweeping 180-degree views of the Sound.

“The original house didn’t use this part of the property at all,” said Ogden, a Montreal native who moved to Hilton Head Island in 1998 and founded his own architectural firm on the island five years ago. 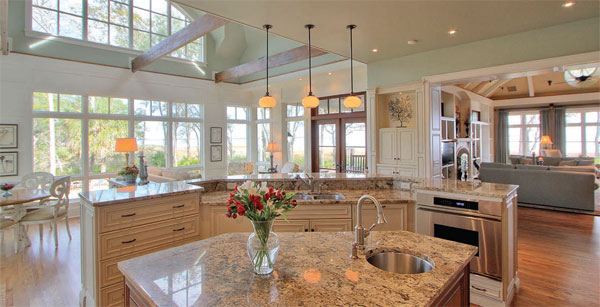 “The main area, which is as it should be, kitchen, living room, Carolina room, everything feels like you are sitting outside,” said Petr Kratky, co-owner of Old World Custom Homes, which he and business partner and fellow Czechoslovakian master craftsman Robert Hlusek founded in 1999. “They utilized all the water.”

“There’s nothing like a view,” said Buck, an interior designer and long-time resident of Hilton Head. “It doesn’t really matter what the weather is out there or the season, that view changes all the time. It’s always captivating.”

The Tierneys, who spend the two cooler seasons in their luxurious getaway home and plan to move here permanently in the near future, relax on their terrace for the view and ever-present sea breeze.

“You can spend your days just sitting on the porch,” Donna Tierney said.

The cornerstone of Ogden’s architectural blueprint in 2011 was to maximize the water views throughout the home while injecting full functionality in the space. 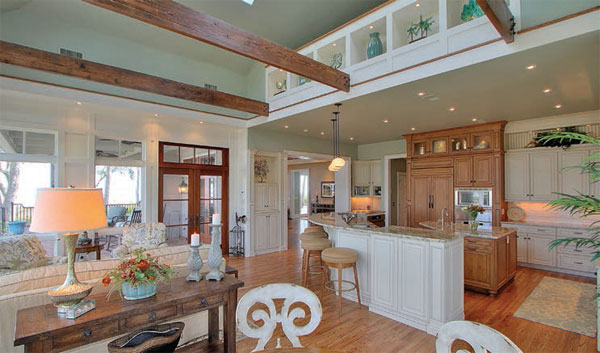 “To me, it’s the quality of the space and how it functions,” Ogden said. “That for me is paramount. … I design from the inside out.

“You don’t need to overdo the details,” he said. “The trimwork should be clean and refined and not take over the whole space. The space itself should be the controlling element.”

Unfortunately, the home’s original layout, which Ogden said “was really not a home that was designed for the site,” presented him with few opportunities to utilize. A simple renovation was not an option. Rooms were gutted, demolished, renovated, reconstructed and constructed. The entire roof was reshingled and its elevation raised in some areas.

The project became a work in progress, as the team retained what they could of the old while building and reshaping the new, and having the finished product look cohesive and fluid from front to back and side to side.

“Initially it was simple remodeling, less expansive than what it is now,” Ogden said. “Once we started looking at it, the owner said, ‘Look, if we’re going to do this project, we’re doing to do this right.’ He said, ‘Let’s do it right.’ 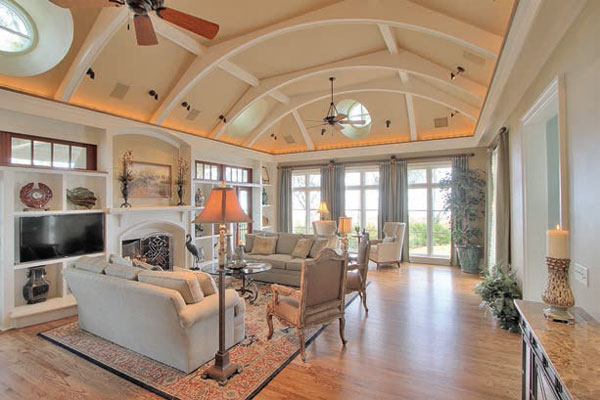 “As we started looking at certain design options it was very clear there was nothing we could do with the kitchen and the way the house was organized,” he added.

“This particular home was sort of an evolution,” Buck said. “We were doing certain parts and then it evolved.”

For starters, the original kitchen, tucked away in the back of the home, was converted to an enlarged butler's pantry, and a winding back stairs from the garage to the new loft was added. The new kitchen was moved to an existing breakfast area enlarged 8 feet in width and 15 feet in depth to include a sunroom/family room. Antique redressed beams anchor the space.

Granite, elegantly beaming with a rich Old World quality, adorns the tops of two islands and the counter, behind which is a brick-patterned subway tile backsplash. Glazed painted cabinetry with raised panels by Advanced Kitchen Designs feature cognac and antique white finishes. A weighted cabinet door hides a television. A sparkling sunroom that leads out to the terrace adjoins the spacious kitchen.

Rising 20 feet from the kitchen floor are skylights that help lighten the comfortable second-floor loft. 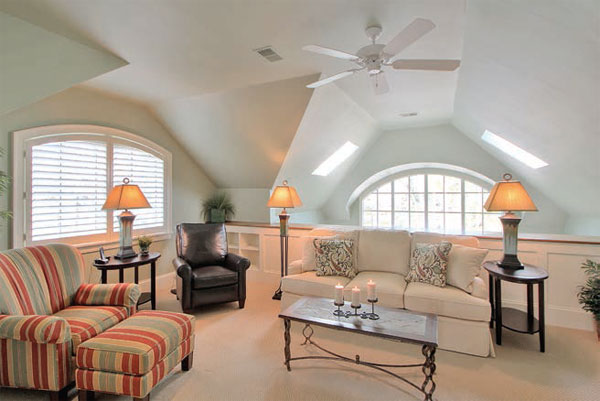 New oak flooring in the kitchen blends in easily with the original oak flooring that was sanded and restained and leads into the great room. What was a 4-foot opening connecting the two rooms is now a wide-open floor plan. Ogden brought more light into the great room by adding circular windows with oval cuts into the ceiling. Arched beams add to the visual charm.

“David and Donna had a vision of what they wanted and put together a good team to achieve it,” said Tom Lauderdale, owner of Advanced Kitchen Designs. “We all enjoyed the process of putting everything together and the end results.”

Meanwhile, a “beautiful Oriental rug sets the tone for the color scheme,” enhanced by bronze-colored fabric on carved French chairs, Buck said, noting that most of the furniture in the home was moved from the Tierneys former vacation home on the same street in the plantation they bought in 2009 and from their home in Illinois.

“So we have these clean lines and add some ornate pieces here and there to give it more of that French flair we were looking for,” she added.

Overall, the interior design is bathed in a “coastal color scheme for sure … coastal greens with the dark woods along with the sand tones,” Buck said. “It’s a light palette, but we’ve got some definition, in that our walls have a depth of color; it’s not pastel by any means. … It’s a very coastal feeling color-wise and then we have brought in some very French provincial elements.”

Her artistic touch is found in every one of the four bedrooms — including the extensively renovated master suite on the first floor, the 5.5 bathrooms, as well as the gallery, small sitting and reading rooms, library and his/her office, and the formal dining room, which originally was a TV room.

“My challenge, of course, was making the old house come into the new house,” she said.

The audio-video system design for the residence can be summed up in two words: simple and hidden. Through the implementation of subtle in-wall speakers by Bowers & Wilkins, audio quality in rooms throughout the home is not diminished while the speakers remain unobtrusive. 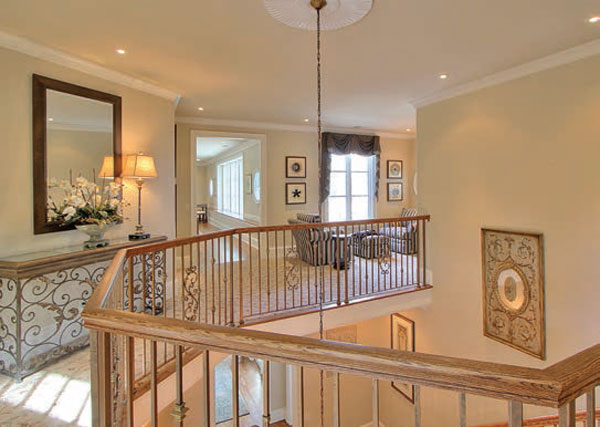 This is especially true in the second-floor gallery, where the amazing view can be complemented by excellent music.

Similarly, the outdoor fireplace features cleverly hidden tree-mounted speakers that have been used to blend in while providing a music experience that not only complements the view, but also doesn’t bother the neighbors. In the family room surround sound system, quality is further enhanced by the use of in-wall subwoofers, which provide the low frequencies for full-range music and, rumbles and booms when watching movies; both achieved without any large boxy speakers marring the aesthetic.

In addition to the pains taken to conceal the speaker system, the audio-video system has been designed in a modular way to allow easy and cost-effective future upgrades of individual rooms and televisions, as well as the addition of any new technologies that may come down the road. The home was, for Custom Audio Video, one more in a long line of successful projects and happy clients. 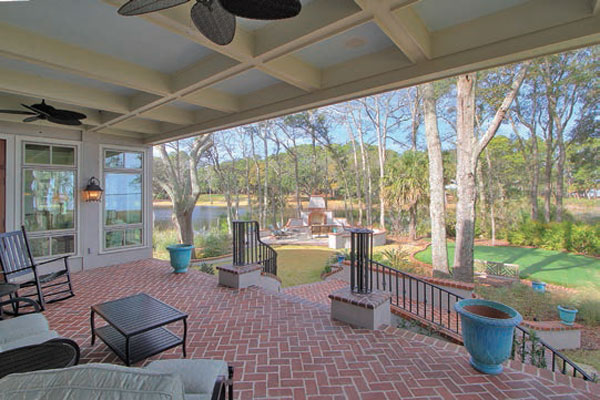 Outside the lushly landscaped property, terraces with commanding sightlines were laid, a swimming pool with a floor-high trellis installed, a pitching/putting green erected and a custom-made fireplace built.

Despite its size, this masterpiece exudes a lot more than just elegant charm.

“For me, the house is livable,” Ogden said. “It’s a large house, but I never feel like I’m overwhelmed by the size. I feel very comfortable here. It’s a warm house, very inviting.” 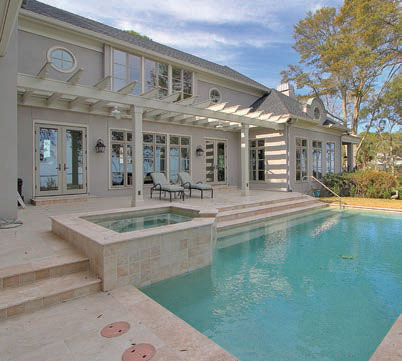