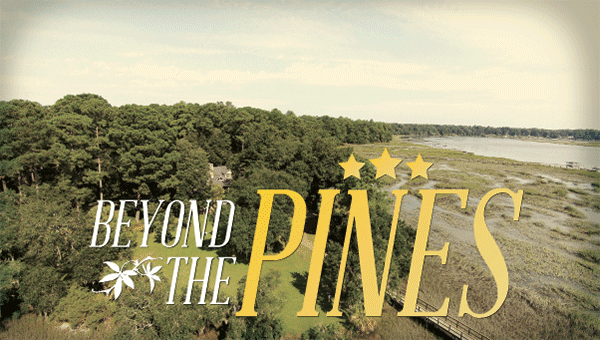 In the beginning, there was a large unspectacular home perched on a spectacular waterfront property on the northern tip of Hilton Head Plantation.

When the Union Bag Co. (renamed Union Camp in 1956 via merger) purchased 20,000 acres of timberland including 32 miles of pristine waterfront in 1937, it built a rustic hunting lodge and retreat. Turkeys, quail, wild boar, ducks and deer flourished in the area, and fish teemed in the May River and freshwater ponds. The sporting life at the lodge attracted hunters, fishermen and luminaries from all over.
Flash forward to now and the Lowcountry cottage home of James Scheider and his wife, Taffy, at the southern tip of Gascoigne Bluff in Bluffton. It looks and feels like that hunting lodge, which was torn down in 2003 to accommodate the ecologically sensitive Palmetto Bluff development and its village, inn, cottages and homes.
This home was not built to impress, although it certainly is impressive. It’s a home for living and enjoying life on a grand scale with family (the couple has three grown children) and friends. It’s also a home for relaxing in comfort and entertaining in traditional Lowcountry style.
Scheider created a living replicative history of that lodge in his own home, replete with mounted game heads, other sporting trophies, leather furnishings, firearms, assorted rocks, handmade baskets and other collectibles from his travels, and assembled them in what he calls his “Alaska” room.

The Alaska Room is filled with many rifles and shotguns in a large glass-display case. An assortment of fishing rods and reels are stashed about the room.

“The genesis of this room was the hunting lodge at Palmetto Bluff,” said Scheider, a lawyer who was also a member of the original real estate sales team at the new development a decade ago. “Palmetto Bluff was a lot like this (his hunting room), and when the decision was made to tear the old hunting lodge down, I said, ‘Well, this may be my one chance to replicate one particular room in the lodge.’ We had fireplaces and a lot of pine.”
His love of that old lodge runs deep and long. For two decades beginning as a boy, the 71-year-old Savannah native spent five or six days at the hunting lodge on many occasions with his father, friends and their fathers who were executives with Union Camp, and other family members.
“A lot of the things in here came from the old hunting lodge at Palmetto Bluff before it was torn down to make way for development,” said Scheider, whose passion for life, family history and the outdoors reflects in his voice. He cited large fox squirrels, artwork, a poker table and chairs, and a cigar humidor.
As he sits on his fireplace hearth describing the details of his Alaska room, a cavalcade of lively stories are weaved into the conversation about the origins of each collectible. His favorite gun, a 12-gauge Browning automatic shotgun, was a birthday present at 12 from his father and shares space with many other rifles and shotguns in a large glass-display case, which at one time numbered 50.  An assortment of fishing rods and reels are stashed about the room. Game heads and fish mounts adorn a large portion of the walls, and a collection of hand-carved hiking sticks serve as accent pieces. Antler lamp bases shoulder each side of a leather couch.
“At present, there are more shotguns and rifles and more fishing rods than I want to disclose to my lovely wife,” Scheider offered with a grin.

“It was just a love of nature,” he said, recalling with enthusiasm his younger-day outdoor adventures while camping and boy scouting. “You can see the collection, from weeds to stuffed animals to skins on the wall. It’s just sort a sense that I could honor these things (animals).” Scheider, who no longer hunts, would rather “sit in a deer stand and watch them. It’s much more rewarding to watch them than kill them.”
Reclaimed heart pine from the old Savannah Morning News building on Bay Street form custom-made built-in cabinets. Flooring of the same pine, some of which are planks 30 feet long, covers the entire house. Burnt and recovered ponderosa pine beams from Montana stretch high across the ceiling. Reclaimed Savannah brick breathes new life as the fireplace frame in the hunting room.
“I’ve just have always wanted to have a place to put all my gear, all the stuff I’ve accumulated, all the times living in Alaska, all the trips, so this is what we created…it’s sort of a mini-museum,” he said. “Everybody gravitates to this room.”
Ironically, the Alaska room wasn’t even part of the original design by architect Ansley Manual of the 4,600-square-foot, four-bedroom and four-and-a-half-bathroom residence. The home, built in 1994 by Wood Construction with interior design by Plantation Interiors, features a walk-in pantry just like Scheider’s grandmother’s, a “formal” dining room that doubles as a library, and high-impact glass windows and hurricane shutters.

A swimming pool, three firepits, a fireplace, oyster cookers and tables, and an outdoor kitchen provide the hardware for cooking, merriment and creating memorable social engagements.

“It’s a unique home. I wanted the feel of wood, be able to see the grains in the wood, the nail holes up there in the boards; it’s very homey for us,” he said.
“It’s Lowcoutry cottage, in the sense we have dormers and broad overhangs to help the house cool, and then I would say typical casual living with a river porch on the back where you can sit out there and watch the storms or have parties,” he said. “We wanted this to be very functional and comfortable.”
And then there’s the glorious property, purchased in 1991, that sits on 9 acres in the shape of a peninsula exposing thousands of feet of private waterfront along marshes, creeks and the May River. Native live oaks, loblolly pines and hickory trees are neighbors to more than 40 trees, hundreds of shrubs and a vegetable garden, all of which Scheider planted himself. He also splits his own firewood.
While Scheider enjoys this natural environment alone in quiet moments, he and his wife love to host get-togethers in their great outdoors. A swimming pool, three firepits, a fireplace, oyster cookers and tables, and an outdoor kitchen provide the hardware for cooking, merriment and creating memorable social engagements.
“In the winter, when the leaves are off the trees and there’s a full moon coming up on the May River and it’s very cold, to have an oyster roast out here and a lot of people, it’s pretty special,” Scheider said.