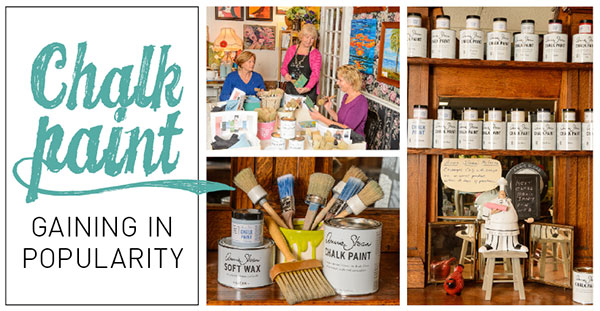 Tucked away under a canopy of towering pine trees at The Village at Wexford is Mum’s the Word, a retail shop showcasing flowers, antiques, painted furniture, books, artwork, gifts and an assortment of other interesting home accessories. On one particular mid-week afternoon recently, six enthusiastic students in painter’s smocks are seated at a large wooden table with brushes in hand ready to paint their newly inspired creations on workshop wood.

Dorothy Howard, a fine artist and owner of the boutique retail store, stands in charge, instructing her students in their 20s to 60s in a three-hour workshop on the basics and intricacies of Annie Sloan’s Chalk Paint. Sloan’s is a unique decorative paint and technique developed by the English native 25 years ago, in which she perfected a paint and waxing formula that was innovative for adorning furniture, floors and walls in a chalky, matte and velvety finish, the finished look resembling old paint. She has written 24 books on paint, paint making, decorative techniques, interior decorating, color and the use of paint.
“Annie Sloan was painting furniture and writing books and she said ‘there’s got to be an easier way,’ ” said Howard, who has met Sloan, attended her conventions and corresponds with her directly. “So she studied it, thought about it, thought about the pigments and what was in the paints and came up with the one and only Chalk Paint.”
Of course, no one but Sloan knows the paint and wax formula, but those in the furniture refinishing industry, interior designers, painters and now the public at large are becoming more aware of the visual magic she created.
Howard did say that the base of the Chalk Paint is different from other paints because there is no acrylic or oil; there’s a binder of minerals in a water base. All of the products—paint, waxes and brushes—are made in the United States, she noted.
“The product is amazing,” said Howard, who moved to Hilton Head in 1974, opened her retail store in 1990 at Wexford, and went through rigorous training to qualify as a Sloan “shopist” a year ago to sell the Sloan line of products under the name Southern Vintage Redefined. “It just works. It’s easy, it works, it’s a beautiful finish...so when you’re done, you have a great look and that’s why they (customers) keep coming back. It’s her formula that’s in the paint…I have a passion for this product.”
”She is the person behind it,” Howard said. “She’s very knowledgeable person who took a lot of time and years to produce the formula for this paint.”
The Illinois native began offering workshops on the Annie Sloan Chalk Paint technique about a year ago. Her bi-monthly workshops attract from three to six students each for a class fee of $95, which includes all materials. They walk away with completed projects in four different finishes, as well as an assigned take-home project. Howard is the only Sloan shopist in the Hilton Head, Bluffton and Beaufort area selling the products and hosting the workshops.
One of Howard’s students said at the recent workshop, “I have a problem piece at home, and I think this is the answer.” Another added, “It’s something different than the normal hobby out there at the moment.” A gentleman at the workshop offered that his wife encouraged him to attend the class to make something special for her while she shopped in the village , even though his birthday was coming up soon. The group laughed good-naturedly as he told his story; they were engaging with each other and enjoying their common pursuit working on wood painting/waxing projects. Another student was getting her master’s at an Ivy League university and another was a professional furniture refinisher who wanted to expand her expertise.
All were at Southern Vintage Redefined inside Mum’s the Word to learn. Here’s the deal: Annie Sloan Chalk Paint adheres to almost any surface: wood, concrete, metal, earthenware inside and outside of the home. It’s user-friendly, dries quickly, rarely requires preparation such as sanding or priming, and can be used indoors and outdoors. The paint comes in 30 colors.
It’s no wonder Howard champions Annie Sloan Chalk Paint.
“It’s the paint that sells the customer,” Howard said. “I’m just a spokesman and an ambassador for the paint.”