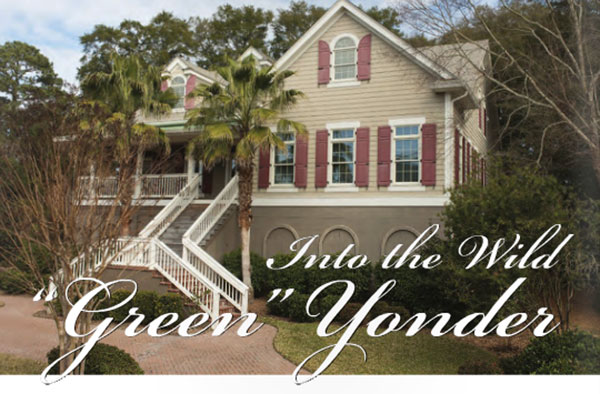 Green has been the lifeblood color for Hilton Head Island couple Ray and Sandra Wenig for decades. But it’s not just a color Sandra Wenig uses in her work as a fine artist, and it’s not just something Ray Wenig considers in his work as an industrial engineer and consultant.

True, green is ever present in the artwork of the Society of Bluffton Artists president that hangs on the walls of their Windmill Harbour home like a gallery exhibition. Her oil paintings, mostly shore scenes of nature’s windswept beauty, will endure for generations. And so will their home, a sustainable, environmentally friendly living work of art thanks to its “green” design, technology, products, system integration, materials, air quality and energy efficiency. 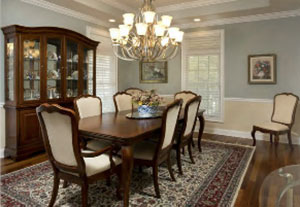 The couple’s three-story residence could be a poster home for the eco-friendly movement locally. The Wenigs’ stately, 6,500- square-foot, five-bedroom and five-bathroom home is a model of energy efficiency and sustainability.
“This house was, for us, our sort of overall concept of livability, sustainability and efficiency,” said Ray Wenig, president of Southeast Angel Partners.
It is the culmination of everything “green” they have experienced in each of the 18 homes they have built or bought during their 52 years of marriage. “Green” living has been a way of life for the Ohio native (him) and Boston native (her) since the late 1970s. In fact, one of the first properties they bought on Cape Cod was an industry award-winning, pioneering solar home. They paid $50 annually to heat it. But their exposure to eco-friendly living began even before they bought their first home; both were boating enthusiasts — their last boat being a 44-footer — and they were keenly aware of ocean pollution and its effect on the environment.
Fast forward to Hilton Head, where they first vacationed in 1993. The pair, who has three daughters, moved to the island permanently in 1999, partly because of the “ferocious” Boston winters. “We said, ‘We’re out of here,’” Sandra Wenig said.
They lived in four other properties in Windmill Harbour before purchasing their ¼-acre property in 2005. They hired architect Merrill Pasco and enlisted the late Mack Parsons and his building team, led by Franklin Fields. Sandra Wenig did all the interior design.
And so began their adventure into the wild “green” yonder.
The home’s design took nearly seven months, and construction took two years. The project was completed in 2007.
From the outside looking in — and even from the inside looking out — the Wenigs’ home looks like a traditional Lowcountry home. It’s not. 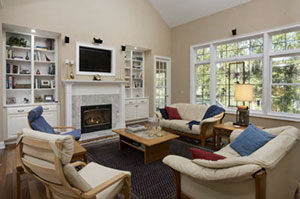 “It’s really what’s behind the walls,” Ray Wenig said. “We know what’s behind the walls,” not to mention what’s tucked away in hidden spaces inside the home, unseen on the roof and outside in the ground.
“From the ground up, this one was truly built to be as energy efficient as we could make it,” Ray Wenig said. “It was an exploration as we started and wanted to introduce as much green as we could … The blank canvas started with the geothermal system.”
That system uses closed-loop ground water geothermal heating and cooling units that rely on seven deep wells in the backyard to form a continuous loop of natural water-filled water piping that brings a constant 54 degrees to two heat pumps inside the home. Those pumps drive two Trane heating and cooling, high-efficiency air handlers and two outside air recirculating recovery systems to maintain the cleanest indoor air quality. Additionally, there are three HVAC zones controlled by Trane thermostats that monitor all system functions and regulate temperatures.
The challenge in building the Wenigs’ home was that frequently, Ray Wenig knew more about greening procedures and products than the local professionals did back in 2005. Locally, Ray Wenig said, no one had installed such a geothermal system, but he enlisted Gochnauer Heating and Cooling to do it because “this was (owner Scott Gochnauer’s) chance to get his feet in.”
Basically, building this “green” home came down to Ray Wenig’s knowledge as an engineer, his copious researching as a homeowner, his choosing of the “green” products and systems and components, finding local vendors who could install them and “who were willing to learn how to install and support that product,” Ray Wenig said. It wasn’t business as usual at all in the typical homebuilding process.
“At that time, specialists didn’t exist,” he said. “It became a project within a project to figure out the whats, the wheres, the whos, the hows. All the things we did on that long list were literally their own little projects.”
Take, for instance, the roof.
Below the granulized fiberglass roof shingles by 3M that reflect about 30 percent of the sun’s rays, the Wenigs wanted to install a Tri-Par “rubberized membrane that seals the cavity and prevents water intrusion.”
“The builder tried to use his nail gun…It didn’t  work,” Ray recounted. “The whole crew, basically, had to go up there with hammers and hit the nails in, every one of the nails…the rubber is like a tire, it’s self-sealing; once you break the seal, it like seals back around whatever comes through.”
Take, for instance, the fireplace in the living room.
The Wenigs wanted to buy and install an energy-efficient sealed fireplace from a company in Minnesota in which all of the combustion is supported by outside air brought inside and blown back out.

“None of the systems we put in here didn’t already exist somewhere else, for example,” Ray said. “It’s pretty much standard piping, but somebody has to know how to do it, how to set it up and how to connect it, so we convinced the people at Suburban Propane, who had multiple locations that had done it elsewhere in their network, so they decided yes, they were willing to put it in here. The fellows that did it, it was the first time they had done it, so this was their learning experience.”
The firebox is sealed and has a fan to circulate air around the heating chamber and into the living room.
The “greening” of American homes has progressed significantly since the Wenigs built their home in 2007, but there are a few things to keep in mind when creating an eco-friendly home. Other things the Wenigs did when building their “green” home include:
• Installed open-cell spray foam insulation from the roof to lower floor levels.
• Treated all structural framing with a non-toxic borate solution to prevent bug and termite infestation.
• Installed a perimeter Senticon termite baiting control system, with regular monitoring to ensure that no insects reach the building space.
• Installed a filtration system for tap water to remove impurities that maintains itself through automatic back flushing.
• Installed clear-visibility film on all windows for sunlight reduction and glass breakage protection, as well as functional shutters that are hurricane-rated.
• Installed hardwood flooring from certified renewable forests that were nailed without toxic glues.
• Installed two KitchenAid dishwashers for energy efficiency.
• Installed low-flow flush toilets in all bathrooms.
• Installed ceiling fans in all rooms to improve air flow and air conditioning circulation.
The Wenigs said they might install solar panels in the future, but said they didn’t do so when building the home in 2005 because of limited product availability and homeowners association regulations.
For the Wenigs, building a “green” home was as natural as plugging in their hybrid Ford C-Max in the garage for an energy recharge.
“I happen to believe in it,” Ray Wenig said. “More and more things will have to be ‘green’ if we’re going to sustain the planet.”
His wife agreed. “We built this house together,” she said.