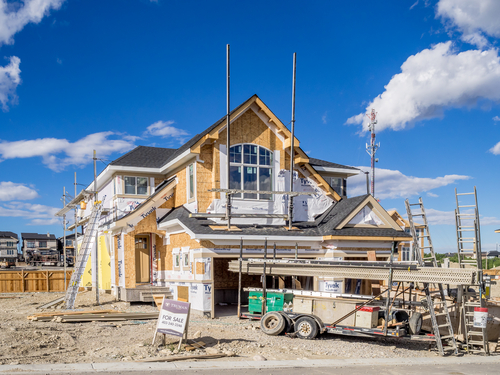 The numbers from last year tell the residential construction stories in Hilton Head and Bluffton. Both stories being told are good ones, but for different reasons.

On the island, fewer homes are being built but they are more expensive than ever; whereas, in Bluffton, there is an unprecedented new-home construction boom that topped 2013’s number by 50 percent.

On the island, the number of single-family home building permits dipped slightly from 177 in 2013 to 168 last year, but the valuation of those homes rose 20 percent, according to data from the Hilton Head Community Development Department.

Fewer homes are being built (especially when compared to Bluffton), partly due to land scarcity, but those being built have never been more expensive. Residential valuation listed on last year’s permits totaled $96,881,348, up from 2013’s $80,793,417.

“I would attribute that to a better economy and that people are getting back to building big homes again,” said Jill Foster, deputy director of the department. She cited an influx of older homes in Sea Pines Plantation and North Forest Beach that are being demolished and replaced with bigger, pricier homes. “Lots of demolitions are being replaced by large homes; this has been going on for a few years,” Foster said.

The average price tag on a new-home building permit last year on the island was between $400,000-$700,000, with 18 permits being issued for $1 million+ properties, up from 11 the previous year. When the recession hit bottom in 2009, Hilton Head issued 26 single-family building permits totaling slightly less than $30 million. From 2012 to 2013, the number of homes and valuations dramatically spiked by doubling. In 2012, 76 building permits were issued capping at $42 million; in 2013, 177 permits were issued with a valuation topping $80 million. Unlike the island, there’s plenty of land in Bluffton upon which to build as the numbers attest.

In 2014, the town of Bluffton issued 604 single-family home building permits valued at $207,080,983, according to the Department of Growth Management. The average construction value as reported by contractors was $363,406. The previous year, 400 permits were authorized.

“People love Bluffton and the word is getting out,” said public information officer Debbie Szpanka. “This year the town of Bluffton has experienced the most regional and national media ever in its history, that combined with the love the people have for this town and the fact that people are telling their friends and families…the word is spreading through word of mouth and the media. Many people have found this to be the best of many worlds.”

Palmetto Bluff led the building-permit stampede with 80, followed by Heritage at New Riverside with 77, Hampton Lake, 74, and Shell Hall, 64.

“There are many factors contributing to the increase in new residential construction in Bluffton,” said Shawn Leininger, director of growth management. “On a larger scale, the economy is improving and interest rates are at historic lows. More specific to Bluffton, we are uniquely situated equidistant to Savannah, Hilton Head and Beaufort. With a great school system, a beautiful environment and a strong sense of community, Bluffton is a fantastic place to both live and do business. As a result we have businesses opening doors and expanding and families relocating for employment at the many businesses not only within Bluffton but Savannah, Hilton Head and Beaufort.”

In 2009, Bluffton issued 161 building permits, with an average construction cost of $305,176. The numbers have risen every year since then. Foster noted that there has been a dramatic rise in the number of permits issued for home renovations on the island.

“Because we’re getting closer to ‘build out’, more people are starting to renovate,” she said. “Renovation permits are really up, and have been for several years. “Looking ahead, the way folks are walking through the doors, I’m seeing a trend pretty much in all of the permitting, especially renovations,” she added.

Last year on Hilton Head, 1,481 renovation permits were issued with a valuation of $39,511,864. Both numbers represent a modest increase from 2013 and are the highest recorded since 2009. In Bluffton last year, 157 permits were issued for additions and remodels, with an average cost of $28,286.