Like a vintage bottle of red wine that matures into greatness in time, Terry and Chris Baehr of Wexford Plantation have come to appreciate the jewel of a golf course that straddles their backyard on Yorkshire Drive on Hilton Head Island.

This wasn’t always the case. 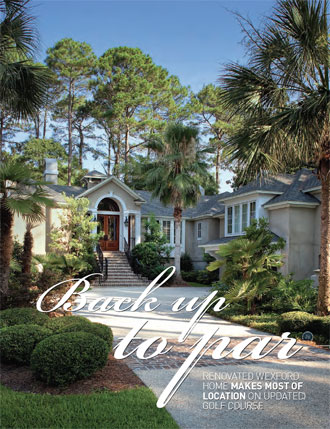 “Candidly, we probably picked the house more than just because it’s on the golf course,” said Terry Baehr, a former IBM executive who retired in 2007. With more time on his hands, a total course redesign by Arnold Palmer in 2011, and a wife who was willing to learn the game and join her husband on the links once a week, he began looking at the 11th tee out his window and the waste sand bunker in the foreground where his grandchildren sometimes frolic after hours in an entirely new light.

“We’ve got a wonderful spot, a wonderful location, and it adds to the ambiance of where we are and where we live,” Terry Baehr said. “It’s just a nice thing to have.”

The couple, who have been married 43 years and were high school sweethearts in Ohio, sign up for the monthly “Nine and Dine” —nine holes of golf followed by a casual dinner with friends in the clubhouse, which received a face-lift in 2010.

Unlike fine wine but like the links’ condition before Arnie worked his architect’s Signature Golf Course magic, the Baehrs’ home, which was built in 1986 and purchased by the Baehrs in 2002, had not aged gracefully through the years.

“When we moved, we knew it wasn’t the way we wanted to live in it full time,” said Chris Baehr, who does volunteer work on the island. “It was a little outdated, we needed a little bit more space, and we needed things to be reconfigured, so we hired Group 3.”

They decided to “work with what we’ve got,” so Mike Ruegamer, a principal of the full-service architectural, interior design and planning firm on the island, and his Group 3 team went to work in 2009. They completed the major renovation in late 2010 after a year of construction. 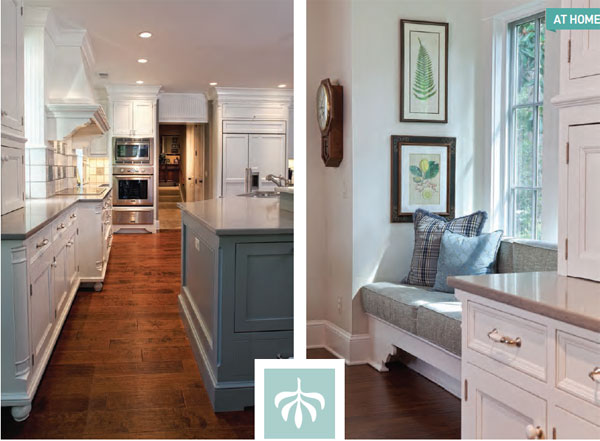 “It really turned out to be a new house,” Terry Baehr said. “Mike came up with terrific plans. When we were finished, we were really, really pleased … One of the first things they did was to take advantage of the golf course and the view.”

Three new custom-made French doors in the back of the home opened the house up to the natural pine-tree splendor outside and the greenery of the golf course nearby.

“They wanted to maximize the view of the golf course,” Ruegamer said. But that was just one of many artistic touches in his masterful redo. 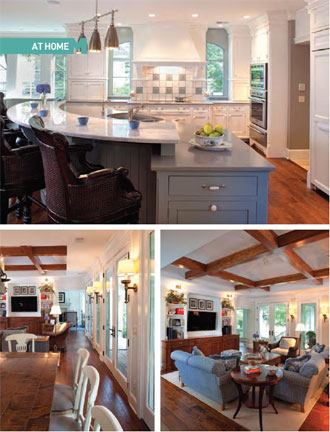 “It’s like a new house, but it had good bones, and they liked the overall floor plan of the house and the location,” said Ruegamer, who co-founded Group 3 in 1986.

The Baehrs did not want to add a lot of space to their existing 3,400-square-foot home, but they did want to add bedrooms to accommodate visitors, including their three grown children, three grandchildren and friends from around the country.

Architect Ruegamer and builder Stoneforge Construction on the island had their hands full with a total renovation of the home downstairs to give the clients what they wanted.

For starters, a tiny kitchen with a small window was sculpted into a state-of-the-art centerpiece for the new open floor plan that visually connects a redesigned great room and informal family room featuring custom-designed antique heart pine beams in the expanded tray ceiling. 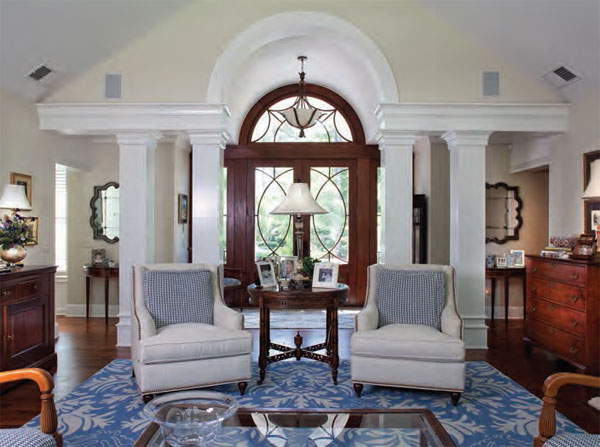 The crescent-shaped island with four-top seating complements a newly tiled backsplash, stove and hood where a fireplace once flickered, and custom-designed cabinetry.

“The kitchen is really special in this home,” Ruegamer said. “I like to tie the cabinets into the trim of the house, so when we do a white kitchen, it matches the trim and really looks custom, which it is.” White flat paint on the ceiling and white semi-gloss paint on the trim provide color contrast.

Another major undertaking was the outside living space. There was none originally, save for a wooden deck that was in “bad shape,” Ruegamer said.

He designed and installed a new brick terrace with “welcoming arms” steps and built a comfortable screened porch with its own fireplace. 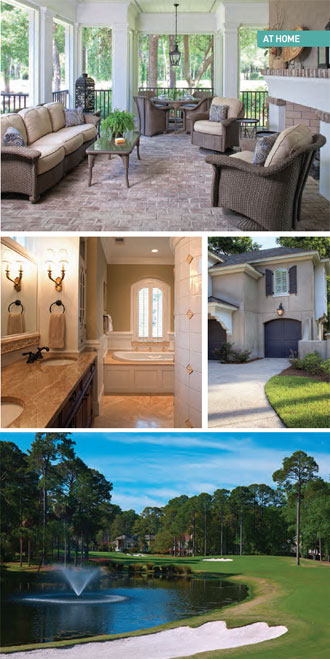 Back inside the house, Group 3 created a “classic, traditional, coastal” interior design using lots of white-painted tongue-in-groove paneling and replaced the carpet and tile with hickory plank flooring throughout the downstairs. Ruegamer also “reupholstered the furniture (which came from the Baehrs’ home in Connecticut, their Wexford home, which came furnished, and new purchases) to give it an island, coastal look and a lighter feel with the blues,” he added.

“It’s a part of us,” Terry Baehr said of the renovation. “I think the house represents our personality and lifestyle … there’s nothing fancy about it.”