Elliott will work out of its Park Lane office in Hilton Head. She serves on several boards, including Hopeful Horizons, the Shipyard Board, and Hilton Head Association of Realtors. Elliot was a Realtor Service Award winner from 2018-2020.

Keyserling, who served for 12 years as the city of Beaufort’s mayor, will work from the downtown Beaufort office. Keyserling entered real estate almost 50 years ago, eventually starting Keyserling Real Estate which became Coldwell Banker Keyserling and then merged with Coldwell Banker Platinum Partners.

Winkler, who joins the company at its Belfair office in Bluffton, has experience in several metropolitan areas (Orlando, Atlanta, Washington D.C., and Northern Virginia).

Cento has more than 25 years of sales and account management experience. She is president of the Women’s Association. Cento will work out of the Belfair office. 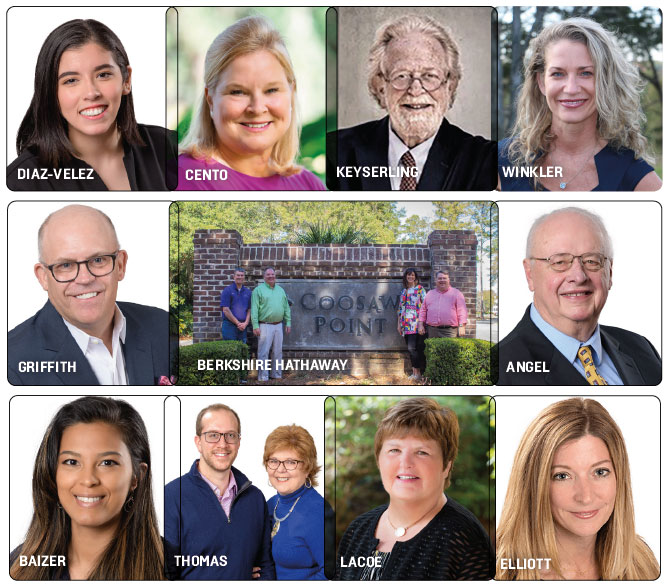 Angel will work out of the Bluffton office. He’s served as the Savannah Area Radio Association President and held board positions with The Savannah COC, The Savannah CVB, ACS, ALA, AHA and currently Family Promise of Beaufort County. He enjoys following the Clemson Tigers.

Griffith, who will work out of the Sun City office, had a 33-year hotel management career. He started as a management trainee with Marriott Hotels and Resorts in Shipyard on Hilton Head Island in the spring of 1986. He became a hotel general manager at multiple Marriott locations.

Nick and Carol Thomas will work out of the Savannah office. They moved to Savannah from Ohio and bought their dream home.

Balzer will work out of the Savannah office. She graduated with a bachelor’s degree in business management from the University of the Incarnate Word in San Antonio, Texas. She completed her military contract within the active-duty Army and holds licensure as a clinical certified medical assistant and emergency medical technician.

Diaz-Velez was born in San Juan, Puerto Rico, but has lived Savannah for most of her life. She is a certified veterinary assistant who has two cats, Tobi and Pepper. Diaz-Velez will work out of the Savannah office.

Gloria LaCoe was selected as the Realtor of the Year by the Realtors Association. LaCoe led the Community Outreach Team in raising $6,000 for Deep Well and Bluffton Self Help. LaCoe also serves on the association’s Professional Development Team and the South Carolina Realtors Professional Standards Committee.

“Given the unusual circumstances this year, LaCoe was the right person in the right place leading the association’s Community Outreach Team,” said Heather A. Baker, 2020 President.

With four offices in South Carolina and one in Georgia, Weichert Realtors-Coastal Properties has been named to the prestigious Weichert Real Estate Affiliates, Inc. Premier Client Group for 2020. The Weichert affiliate is one of only 30 – out of more than 260 – companies from the Weichert national franchise network named to the elite group of real estate brokerages.