There was a big turnout in June for the debut of Minto Community’s first model homes in Latitude Maragaritaville. The celebration included a live band, a steel drum band, games, food and giveaways. Visitors were shuttled to the newly opened Lake Latitude Club, featuring a resort-style pool, sandy beach area, fitness center and party room, and were able to tour the nine model homes and submitted offers on the first phase of the community. This is the second Latitude Margaritaville to open; the first is in Daytona Beach and was just named the nation’s most popular active adult community for 2018 by 55places.com.

Charter One Realty was also recently ranked by REAL Trends as one of the top brokerages in the nation.

Franseen has teamed with the Crews and Jenkins Team and will work in the North Forest Beach office on Hilton Head Island.

Camp has joined the company as an agent working with Marvin Hall, and she will be working at Bluffton office at The Calhoun Street.

Bromiley has a decade of experience in the real estate industry and will be working from the company’s Oldfield office in Okatie.

Stephenson will also be affiliated with the Oldfield office. Before joining Charter One, Stephenson was the broker-in-charge at Oldfield Realty.

Chafer will join Camp at the Bluffton office. Previously, she had a successful real estate career with an international franchise brokerage in the Lowcountry.

The local housing market is hot, according to a recent Forbes report. The magazine named Hilton Head Island on its list of "Five Emerging Markets For Luxury Real Estate in North America.” The author, president and CEO of Engel & Volkers Americas Anthony Hitt, writes that more professionals looking for work-life balance are deciding to turn their Hilton Head vacation homes into their primary residences.

Southern writing legend Pat Conroy’s summer home on Fripp Island is for sale. The three-bedroom, 2,300-square-foot home on the island's Blue Heron Lake was where Conroy completed his “Beach Music” novel, among some of his other famous works. Some of his furnishings, including a large dining table and six-passenger Gamecocks golf cart, will be sold with the property. Conroy moved to Fripp Island in 1992 and passed away at his Beaufort home in 2016. 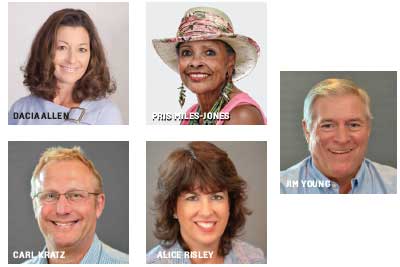 Allen recently move to the Lowcountry from Ohio, where she worked at Burgan Real Estate.

Miles-Jones has been in real estate for more than 30 years. Previously, she served as a broker in California.

Kratz has been a full-time Realtor for more than nine years and a broker for the past three years.

Risley has 10 years of real estate experience in New York, where she worked for top firms on Long Island’s South Shore.

Young has been a top-producing real estate agent and broker since 1989 and a successful Lowcountry real estate professional since 2009.

Stacey Bartlow has been a Lowcountry resident for 23 years. She previously worked in the medical management field for more than 17 years.

Peter Hoskins returned to the Hilton Head Island area from Naples, Florida, where he was a Realtor for two years.

Michele Martin is originally from Virginia and worked as a Realtor in Massachusetts.

Crenshaw is a lifelong resident of Hilton Head Island and has owned and managed local businesses for 20 years.

Diroma was a professional tennis coach for more than 10 years, serving as a head pro at the South Carolina Yacht Club in Windmill Harbour and as the tennis program coordinator at Princeton Tennis Center in New Jersey.