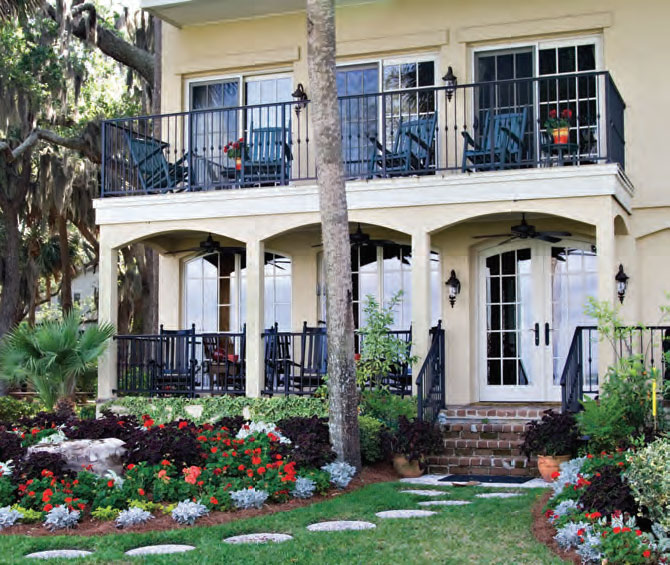 Far from unfortunate, everything’s looking up on Hilton Head Island. Except for home prices. It’s time that changed.

You don’t need to look too far to see that amazing things are going on around Hilton Head Island. Everywhere you turn, a spirit of “out with the old and in with the new” is sweeping the dust off the rock, polishing it to a glorious luster.

From the rebirth of run-down shopping centers to the re-nourishment of our beaches and the rejuvenation of our golf courses, it’s almost like watching Hilton Head Island be reborn. Forget the storm. Wipe the word “rebuilding” from your vocabulary.

Hilton Head Island is not just rebuilding. It’s crackling with new energy like no other time in its history, and everything seems to be looking up.

So why aren’t home prices?

“Our prices are stuck in the middle to lower end, and that’s not right,” said Philip Schembra of Schembra Real Estate Group. “When you look at all of our competition in high-end oceanfront resorts, we’re lagging behind.”

Fortunately, this spirit of rejuvenation on Hilton Head is creating the perfect atmosphere to send those home values skyrocketing, placing the island’s values where they belong among other upscale coastal communities.

In real estate, there’s a term called an “impending event.” Essentially, it’s something on the horizon that could have a positive impact on home values, be it new development or community improvement. According to Schembra, it’s been some time since the island had one of those, since there haven’t been new developments.

But if you want to talk improvements, Hilton Head has those in spades. And it’s time the island knew what they were worth. To help make this point, Schembra assembled a cross-section of local leaders for a recent symposium outlining the exciting things getting ready to reshape Hilton Head. Each presented what was new in their own personal sphere, with each adding to a portrait of an island set for a period of enormous growth and prosperity.

The first panelist was Steve Birdwell, president of The Sea Pines Resort, who emphasized the tremendous work already done in overhauling the resort. From the new Planation Golf Club, Sea Pines Beach Club and Harbour Town Clubhouse to course improvements at Harbour Town Golf Links and Atlantic Dunes, the resort has just wrapped a period of unprecedented remodeling.

And it’s not done yet. Just wait until you see what’s being done around Harbour Town.

Heading outside the gates of Sea Pines, Hilton Head town manager Steve Riley outlined what “a half-billion of investment over the past six years” looked like in terms of new projects all over the island, from the new Shelter Cove Towne Centre to the expansion of the Island Rec Center to the new University of South Carolina Beaufort facility; from the rebirth of Pineland Station as Sea Turtle Marketplace to the Marriott Courtyard property planned for Pope Avenue.

Again, these are all things you see happening around you. But it’s worth emphasizing that this is an enormous opportunity for island real estate.

“For those of us in real estate, that’s going to enhance our jobs and make it a heck of a lot easier,” Schembra said. “Any time you build these types of facilities, you bring money along with it. But more importantly, people’s dreams become reality.”

Driving home the immense interest in our area, Ariana Pernice, vice president of the Hilton Head Island Visitor & Convention Bureau, outlined the hard work being done to spread the Lowcountry brand to the world. Through destination marketing, the organization has placed the Hilton Head brand in targeted print and online channels that have created marked interest in the island, from increases in search engine traffic to major awards from outlets like Conde Nast Traveler, USA Today and Travel + Leisure.

That interest is translating to home sales, as James Wedgeworth of Charter One Realty pointed out during his presentation. Comparing the first 22 days of February from last year to this year, Wedgeworth illustrated a 20 percent increase in homes sold.

“The good news is, you only need to have a small increase in sales to have a positive impact in property values,” said Wedgeworth. “If all this money’s being invested, that’s positive for the long-term value of Hilton Head. I was selling property earlier today; I wish I’d had Steve and Steve in the car with me.”

And therein lies the next step. If the island’s real estate community recognizes the immense work being done, the incredible investment already made and the exciting “impending events” on the horizon — events outlined during the symposium — rising home values will follow.

“As it is, we overdeliver in amenities and underdeliver in price,” said Schembra. “If we’re winning all these awards, and people already love the island, what are they going to think when we roll out everything that’s coming next?”

So get out there and spread the word that big things are happening and even bigger things are coming, Hilton Head Island. Your home values will thank you.

“We definitely have a story to tell,” said Schembra.

As an exercise in comparing high-end listing prices, Schembra Real Estate Group researched listings for a range of five-bedroom homes on Hilton Head Island and in comparable upscale oceanfront resort communities. The stark differences in average prices speak for themselves: