A wedding is one of the biggest social events out there, and social media has ramped up every aspect, from the day she says “yes” to the propsal to the moment the couple says “I do” at the altar.

These days, it seems like an engagement isn’t official until it’s seen on social media.

According to a 2016 survey by The Knot, 60 percent of brides said they announced their engagement on social media within 24 hours of saying “yes,” and 86 percent shared their news within the first week. 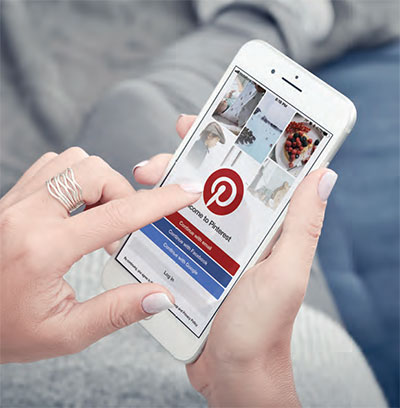 While Facebook and Instagram are the most frequently used social channels for announcing the big news, when it comes to the actual planning, Pinterest still reigns supreme.

The ability to create mood boards, surf the web for inspiration and pin every single thing you love makes Pinterest a big go-to for brides and grooms.

“I used Pinterest and had a board for beach weddings,” said Michelle Erford, who pulled off a beach-themed wedding last spring. “I used it to help make decisions on hair and centerpiece decorations. My bouquet was made of seashells, but my bridesmaids had real flowers, so I used Pinterest for ideas for those too. I know my mom, sister and mother-in-law drew from Pinterest as well for a lot of other decoration ideas that they set up for me, like paint brushes hanging from a sign ‘For sandy toes,’ a message in a bottle instead of a guest book, and starfish hanging from the chairs.”

Sweet little creative touches abound on the social channel, and brides and grooms are coming to wedding planners with a ton of them — which can be a blessing and a burden, planners say.

It’s helpful for planners to see a couple’s vision, personality and specific dreams they have for their big day, she said, but tensions can run high when a bride wants something replicated exactly as she’s seen it elsewhere, and that might be impossible at certain venues or for certain vendors.

Plus, Daley said, the most popular wedding inspiration boards on Pinterest begin to bleed into the weddings hosted here on the island, making those “unique” touches brides are so insistent on including not exactly unique.

“I see the same things at weddings because people are looking at the same boards,” she said.

And for some couples, having ready access to an unlimited number of inspiring images and ideas out there can turn the planning process into a merry-go-round of changing requests.

“I think there’s almost too much out there,” said Daley, who has worked with a few brides who continue to post new ideas to their boards right up to the wedding date. “I don’t cut anyone off as far as asking for new things, but we do have a deadline. Sometimes you just find that people want too many things and you just have to tell them less is more. You’ve got the beach as your backdrop; you don’t need to do too much more.”

Once the planning is over and the parties begin, many couples pick a wedding hashtag for guests to use when posting photos online. Couples also can create a custom Snapchat filter to use the day of their wedding to make snaps extra fun and personalized.