If you’re getting married in the Lowcountry, you’ll need to apply for a marriage license in person at the Beaufort County office of the probate judge. You and your fiancé will both need to be present and present your full names, Social Security numbers, ages and places of residence. This is a sworn statement, so you’ll both sign the document and it will be notarized in the office. 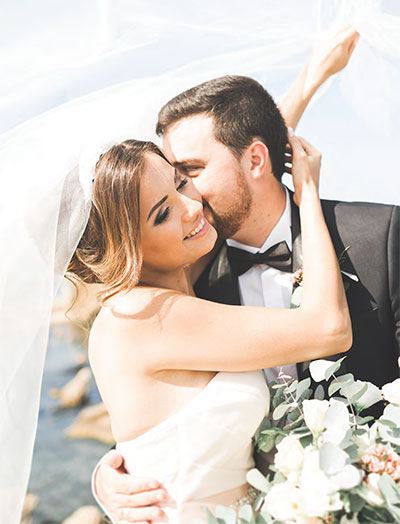 Once you’ve applied for the marriage license, there is a mandatory 24-hour waiting period before you can pick it up. Be sure to factor that into your planning; if you’re getting married over the weekend, you’ll want to apply for the license earlier in the week. If you are 18 or older, you do not need parental consent, but you will have to show identification. If you are younger than 18, parental consent can be given for boys and girls who are at least 16.

IF YOU’RE GETTING MARRIED IN THE LOWCOUNTRY, YOU’LL NEED TO APPLY FOR A MARRIAGE LICENSE IN PERSON AT THE BEAUFORT COUNTY OFFICE OF THE PROBATE JUDGE.

All minors must file an original birth certificate or certified copy, and the parent or legal guardian must be present at the same time as the minor to present identification and sign a consenting form to the marriage. A South Carolina marriage license is valid for six months from the date it was issued. If not used within the six-month period, the application process, including payment of fee, must be repeated in its entirety. In South Carolina, proof of a divorce is not required if married previously (unless you legally changed your last name back to your maiden name). Common-law marriages are not allowed, and no blood tests or physical exams are required. 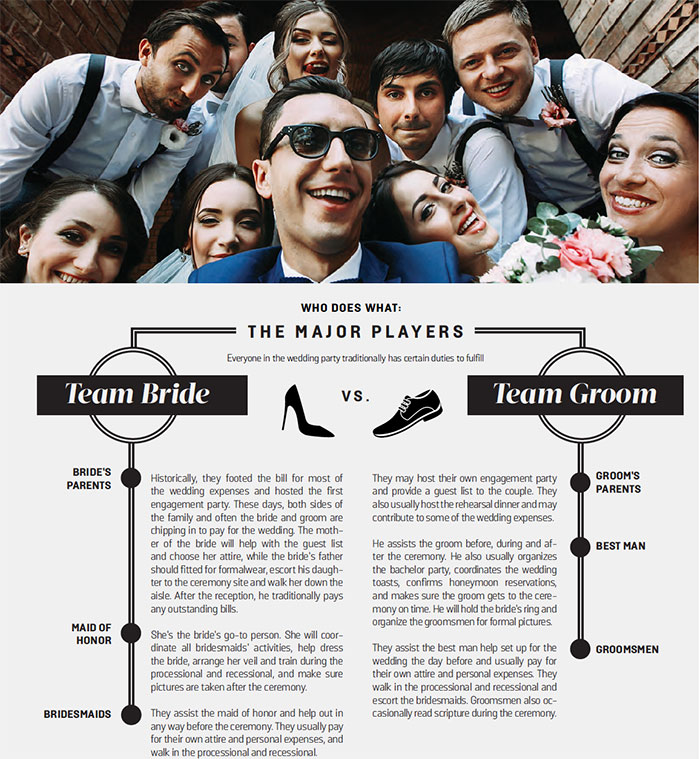 WHEN YOU’RE APPLYING FOR YOUR MARRIAGE LICENSE, MAKE SURE TO REQUEST MORE THAN ONE COPY. YOU WILL NEED MULTIPLE COPIES OF YOUR MARRIAGE CERTIFICATE IF YOU’RE CHANGING YOUR NAME. YOU’LL NEED THESE COPIES TO UPDATE YOUR DRIVER’S LICENSE, PASSPORT, SOCIAL S ECURITY CARD AND OTHER DOCUMENTS.

Everyone in the wedding party traditionally has certain duties to fulfill

Historically, they footed the bill for most of the wedding expenses and hosted the first engagement party. These days, both sides of the family and often the bride and groom are chipping in to pay for the wedding. The mother of the bride will help with the guest list and choose her attire, while the bride’s father should fitted for formalwear, escort his daughter to the ceremony site and walk her down the aisle. After the reception, he traditionally pays any outstanding bills.

She’s the bride’s go-to person. She will coordinate all bridesmaids’ activities, help dress the bride, arrange her veil and train during the processional and recessional, and make sure pictures are taken after the ceremony.

They assist the maid of honor and help out in any way before the ceremony. They usually pay for their own attire and personal expenses, and walk in the processional and recessional.

They may host their own engagement party and provide a guest list to the couple. They also usually host the rehearsal dinner and may contribute to some of the wedding expenses.

He assists the groom before, during and after the ceremony. He also usually organizes the bachelor party, coordinates the wedding toasts, confirms honeymoon reservations, and makes sure the groom gets to the ceremony on time. He will hold the bride’s ring and organize the groomsmen for formal pictures.

They assist the best man help set up for the wedding the day before and usually pay for their own attire and personal expenses. They walk in the processional and recessional and escort the bridesmaids. Groomsmen also occasionally read scripture during the ceremony

SHOWER THE BRIDE WITH LOVE 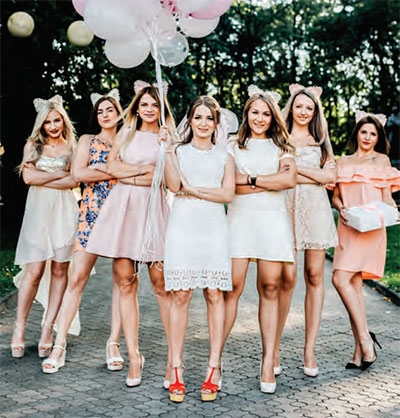 The custom of a gift-giving party held for a bride-to-be in anticipation of her wedding originated in the 1890s. Legend has it that when women in the nineteenth century wanted to marry “unsuitable” husbands, their families refused to pay for the wedding or provide a dowry. So friends of the couple gathered to pitch in with gifts which allowed the wedding to take place and helped the couple set up their home.

Today bridal showers are a time to share stories and advice, eat and drink, and pay special attention to the bride. Before you start planning, make sure the bride wants a shower in the first place. A bridal shower is often a fun afternoon, but some brides might feel uncomfortable with all the attention or greedy for asking their friends and family for more gifts. Many etiquette guides frown upon family-member-hosted bridal showers because it may be seen as rude or greedy for family to ask for gifts for their own relative, but in recent years it’s become completely acceptable.

Unless it’s a surprise, involve the bride in the planning process. Ask her to create a registry if she hasn’t already. While bridal showers guests are traditionally all women, today many showers are coed affairs, known as “Jack and Jill” showers, that celebrate both bride and groom.