What do football season and a winter wedding have in common? Just ask Hilton Head newlyweds, Camille and Charlie Schramm.

Both are graduates of the University of South Carolina and avid football fans, which explains Charlie’s choice for proposing in September of 2018 at — what else? — a tailgate.

“We’re obviously Gamecock invested,” he quips. Camille wasn’t sure Charlie would ever propose, so when he dropped to one knee, it took her breath away. Then he went mute. 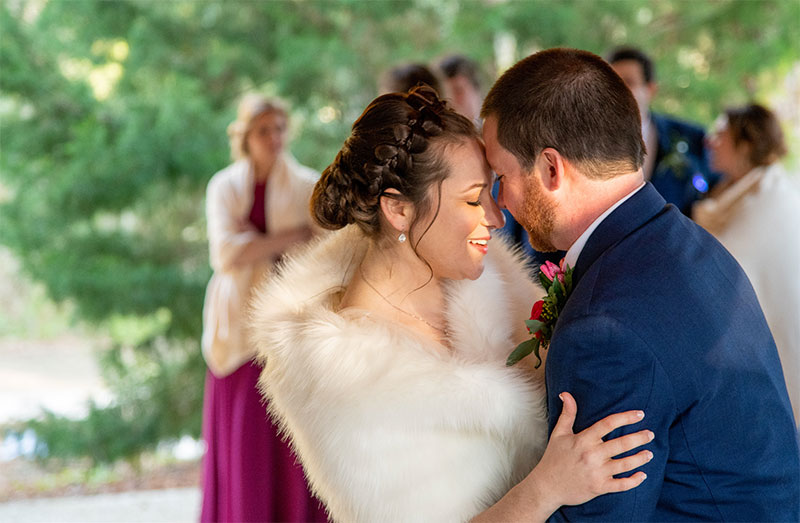 “You have to ask me … you can’t just sit there,” she cried, brushing away tears.

By day’s end, they were strategizing about a wedding date like a pair of coaches.

Summer was too hot and football season was too busy. Spring was already taken because Charlie’s sister was getting married. But February, when average temperatures hover around 70 degrees, seemed perfect.

But little about 2020 or their plans would be normal. For starters, the wedding had to occur on Feb. 21. 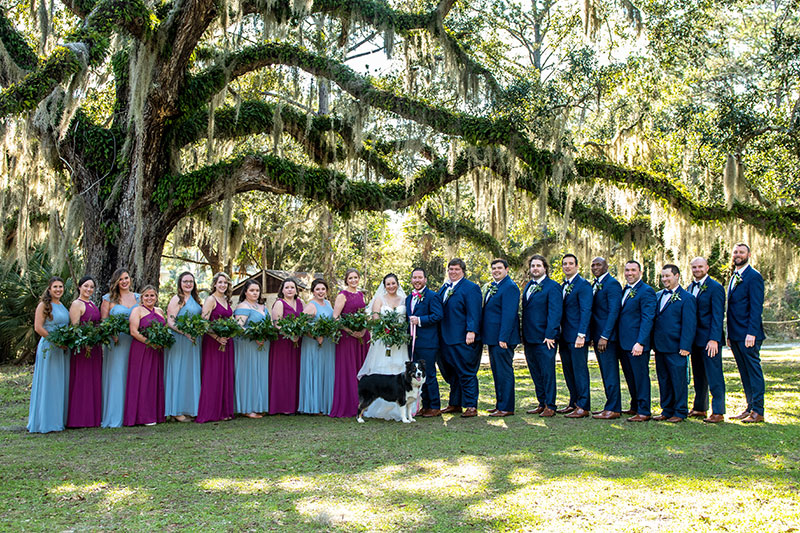 “My birthday is July 21, Camille’s is May 21 and we met on December 21,” said Charlie. “The date was intentional – it just happened to fall on a Friday.”

The wedding party would include 10 bridesmaids, some wearing fuchsia dresses and others, baby blue. The nine groomsmen would sport navy blue tuxes, while Charlie would add a pink vest and bow tie. Spurrier, the couple’s dog (named after the former USC football coach), would join the ceremony.

“We needed an outdoor and dog-friendly venue,” says Camille. 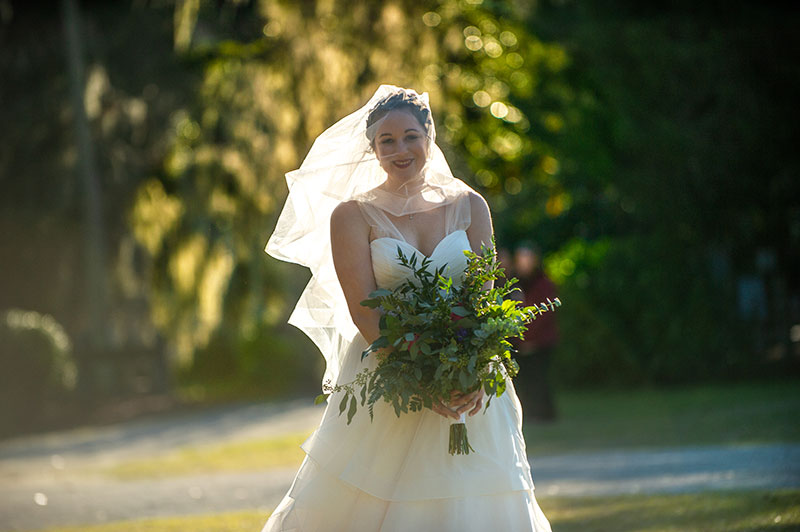 Honey Horn Plantation with its acreage, covered pavilion, and accessible parking fit their needs perfectly. The large fire pit would prove to be useful, too.

Forgoing the usual abundance of flowers, Camille chose greenery for bouquets and decorations.

“We wanted to keep it natural,” she said, “and we had driftwood as accessories.”

The rehearsal dinner was casual.

“It was at Carolina Coffee and Crumbs with tapas and grab-n-go items,” says Camille, so friends and family could meet each other. 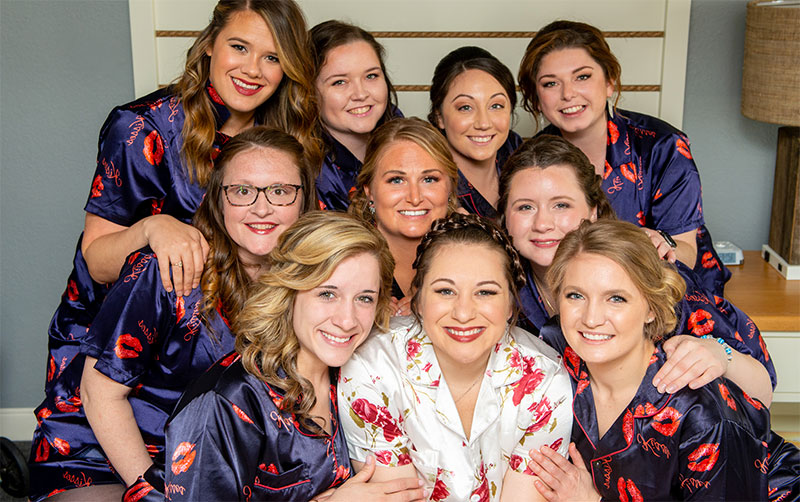 Camille, originally from Fort Mill, graduated from USC in 2010. An accountant for The Green Thumb, she has lived in the Lowcountry for 15 years. Charlie, who was born and raised on Hilton Head Island and is a salesman at Cintas, graduated in 2012. They met on Hilton Head over Christmas break in 2011 and for 10 years have enjoyed their shared love of football and the Gamecocks.

Football served as the biggest break from tradition for the wedding which was secret until the night of the reception — an appearance by “Cocky,” the USC mascot.

“Football is something that we love to do, and it brought us together, so we wanted to make it part of the wedding,” says Camille. When freeze warnings were predicted for the night of their wedding, panic set in. 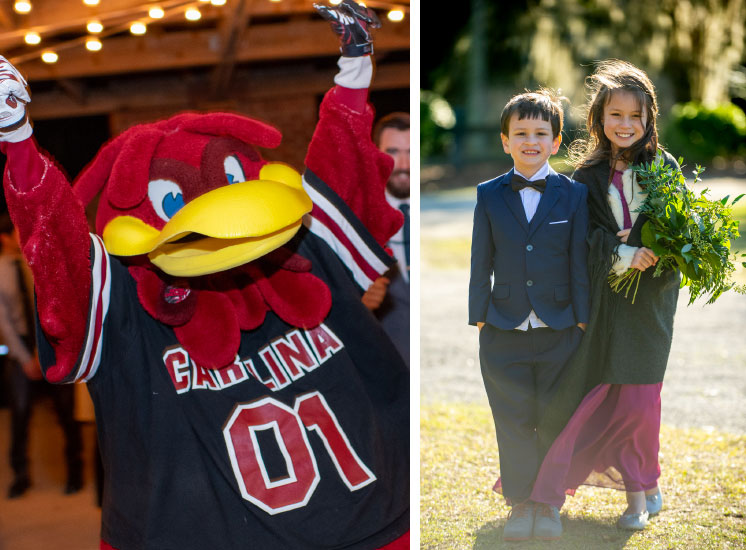 “I mean the dates are set; there’s no going back,” Charlie recalls, explaining how they scrambled to find heaters.

The venue had a few, the rental company even less. Thankfully, Frosty Frog Café, where Charlie worked a second job, agreed to share theirs.

“We ordered blankets for our guests, and started collecting heaters,” Charlie laughs.

Camille bought scarves for her bridesmaids and borrowed a white, furry shawl from her sister-in-law to wear over her strapless gown.

The brisk wedding day began with pictures. First, at the hotel with the bridesmaids in matching pajamas and then at Honey Horn before the ceremony. 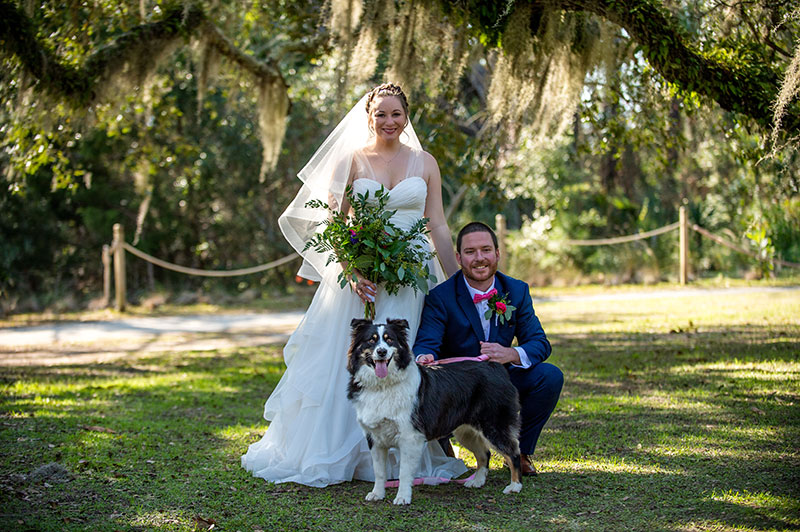 Spurrier, escorted by the owner of Red Rover Playcare, joined the photo shoot as well, though he preferred chasing sticks to posing for pictures.

At 4 p.m., just as the sun was fading, the ceremony began. Serenaded by guitar music, Camille walked down the grassy aisle and joined Charlie under a giant oak tree. As they exchanged vows, Spurrier cried and howled.

“It was really funny and eased my nerves,” says Camille.

A f t e r w a r d s , everyone moved to the pavilion for the introduction of the wedding party, the first dance, and a buffet meal. Then the couple discreetly disappeared.

When the DJ announced a special visitor was joining the celebration, Cocky strutted in, flanked by Charlie and Camille twirling small towels as “Sandstorm,” the unofficial football anthem, blasted from the speakers. 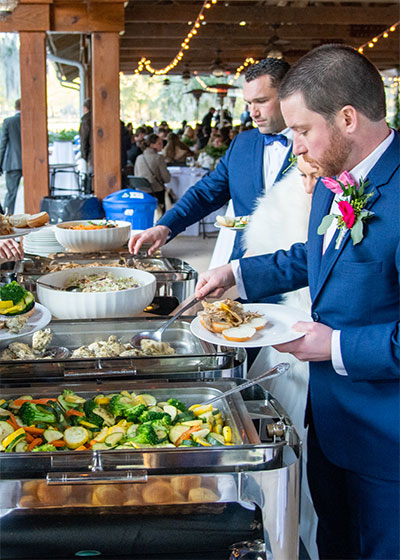 The crowd went crazy. Some grabbed napkins and joined in the fanfare; others flooded the dance floor snapping pictures and gyrating with the mascot.

“He became a highlight just because it was such a surprise. He even led a rendition of limbo under the stars.”

But when Camille noticed everyone huddling around the heaters and fire pit, she pulled Charlie aside

“Look at all these people we’ve brought together,” she sighed. “They love us so much that they want to stand out here in the freezing cold.”

Ending earlier than planned, the couple left through a tunnel of waving glow sticks and echoing cheers.

A week later the entire country went into lockdown.

“Twenty years from now, people will remember our wedding,” says Camille, ever aware that even the best of plans are full of surprises.

OFFICIANT:
Wedding By the Sea