Rachel Eudy had always wanted a fall wedding. She loves the outdoors, so when she and her now-husband, David, decided to get married, they knew they wanted nature to play a big part in their September nuptials.

Friend Tim Wright offered to let the couple use the Lowcountry-style clubhouse at The Paddocks, a neighborhood nestled alongside a stretch of Hilton Head Island wetlands. 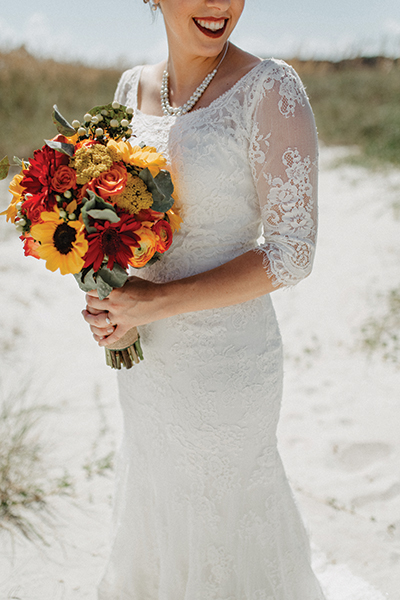 “We got married right on the marsh, on the waterway in Jarvis Creek,” David said. “It was high tide, absolutely beautiful.”

The couple timed their ceremony just right — even though they didn’t plan it that way. Their first dance coincided with sunset, which provided a dramatic background in pink and gold for their first moments as a couple. Matthew Roland, their photographer, was able to show the happy couple a preview of the unexpected shots — and they left Rachel breathless.

“I grew up in Michigan, so I had no idea what it would be like to have a wedding here. Right in that area, the sunsets are beautiful every night,” she said. “It was perfect timing, but we didn’t even plan it. It just happened that way.”

The evening continued to unfold perfectly, with David and Rachel both describing it as “relaxed.” Of course, that could have been because the guests were also involved in the planning of the event. 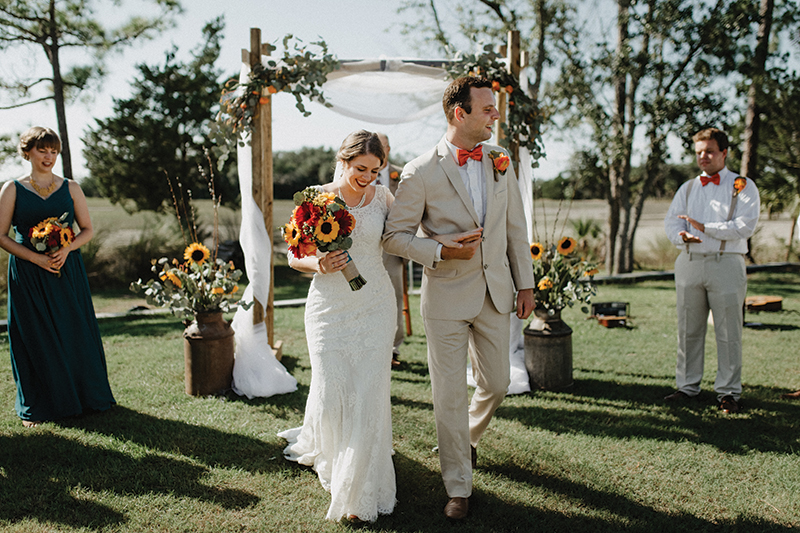 David’s brother, Adam, is a chef who has cooked at the White House and the Pentagon. He made the rehearsal dinner, opting for a Lowcountry boil and keeping things simple by laying out the food on a long buffet table. After guests had loaded their plates with she-crab soup from Sigler’s Rotisserie & Seafood in Bluffton, fresh shrimp from Bluffton Oyster Co., hush puppies and key lime pie, Adam suggested that everyone sit next to a person they didn’t know — an idea David fully supported.

“It was wonderful to see the family getting to know each other, a great icebreaker,” he said. 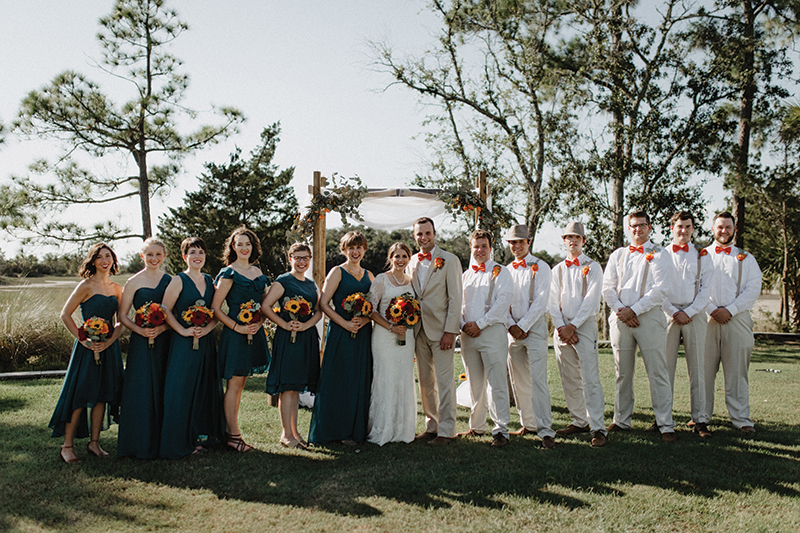 For the ceremony, Rachel took advantage of her sister’s design skills — skills she honed as a stage manager in New York. Using seasonal fall flowers from Horst Wholesale Florist in Charleston, Rachel’s sister crafted beautiful bouquets and table arrangements and a wedding arch. She combined the deep fall colors with bright eucalyptus, complementing the dark teal dresses worn by the bridesmaids. She even decorated the red velvet wedding cake, baked by Adam, with the fall blooms. 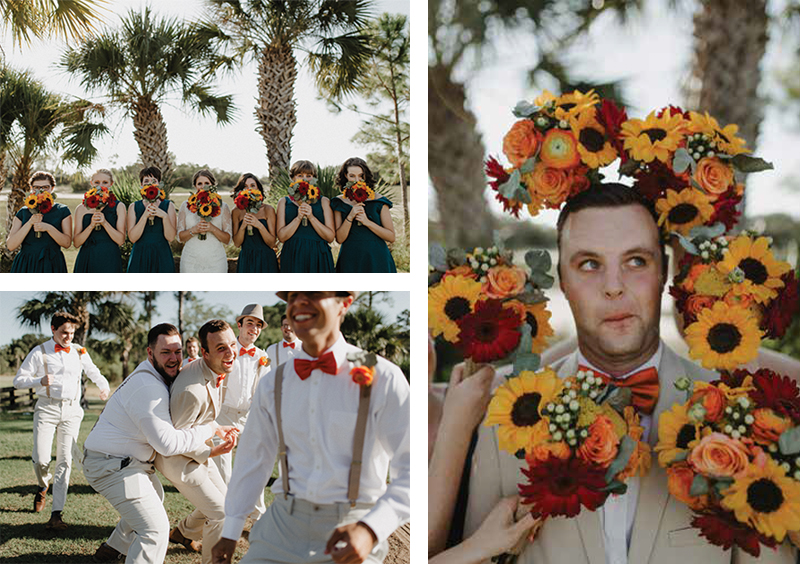 David’s father, an ordained Baptist minister, performed the ceremony. David couldn’t imagine anyone else officiating, and his father felt the same: “He’s always wanted to marry his own children,” David said.

Rachel’s aunt, Sharon Greene, volunteered to cater the event. A professional from Michigan, she joined with another family friend for the barbecue meal, creating a menu that reflected some of Rachel’s family favorites. 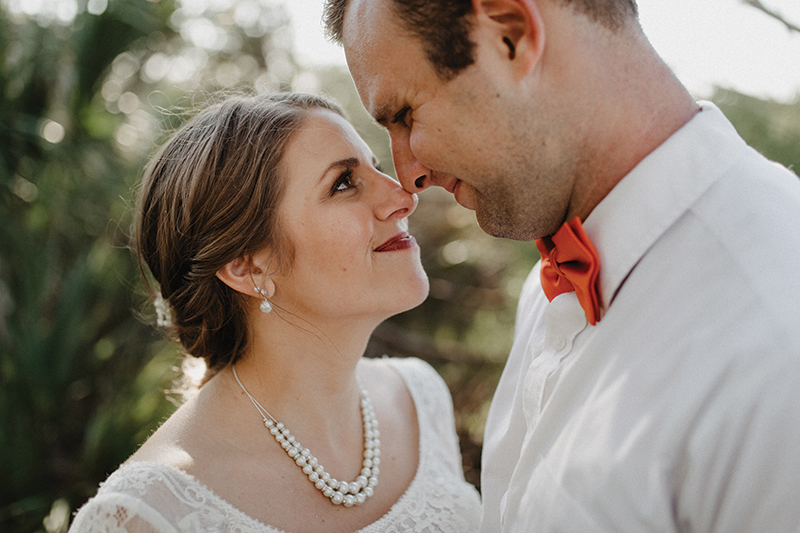 Most importantly, she made sure the wedding party was served dinner before the buffet was opened to their guests, allowing Rachel and David an opportunity to enjoy their own meals without stress or interruption. They ate their Southern-inspired feast under lights they strung around the fire pit and pool deck area at The Paddocks, enjoying the moments under the stars.

The couple added a few other personal touches to their big day. 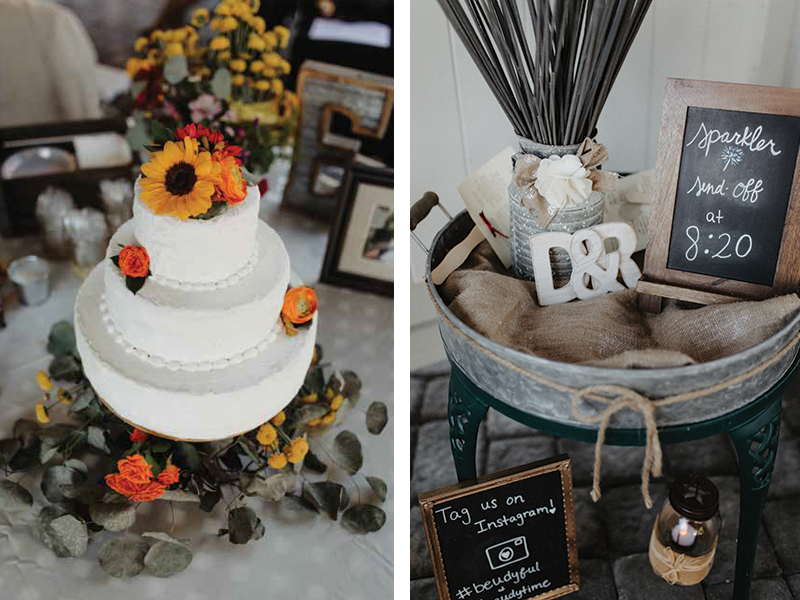 To help ward off the late afternoon heat, Rachel and David added handles to their wedding programs so guests could use them as fans. David said the idea “was a hit,” as the evening was still hot despite a constant breeze coming from the river. The night before the wedding, Rachel took some time to tie ribbons on the programs. She also made chalkboard signs to point guests to the ceremony site. 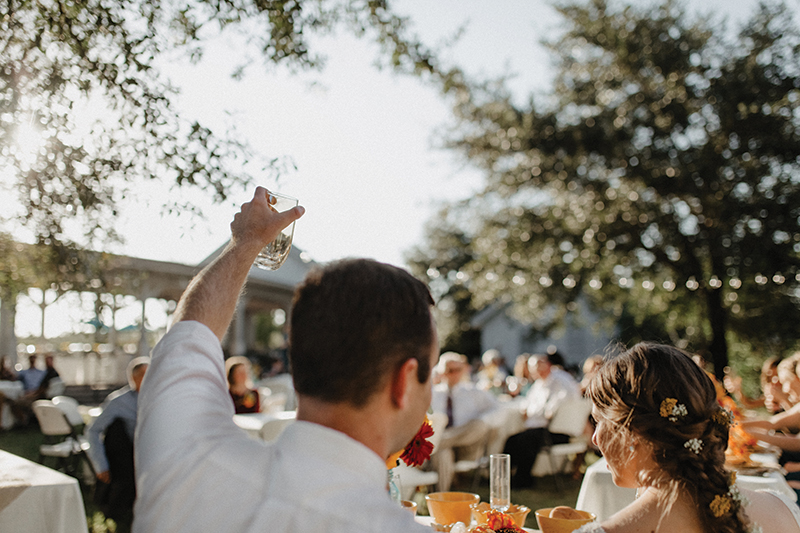 David was able to add a taste of his native North Carolina, arranging for the local Cheerwine manufacturer to deliver glass bottles of the sweet soda to be served at the reception.

With all this organization, Rachel felt cool and calm on the day of the wedding, but David was still tense. 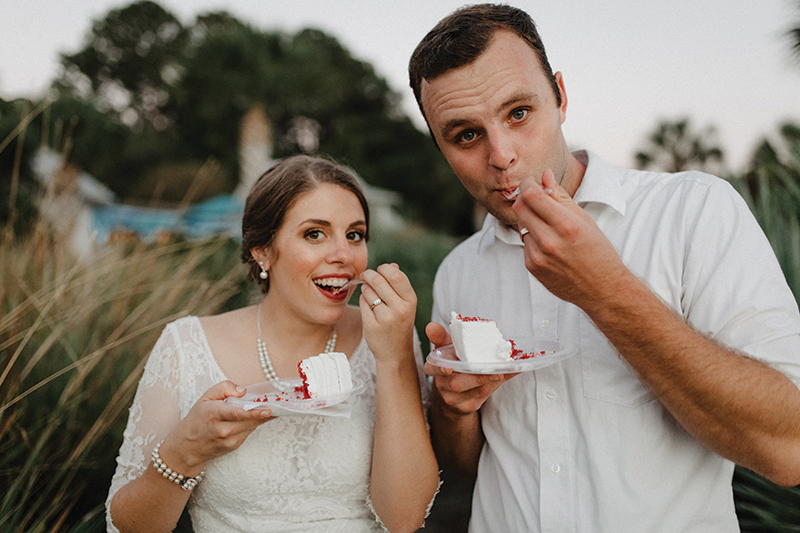 “I shouldn’t have been nervous, but I was,” he said. That all changed when the ceremony got underway, though. “When I saw Rachel come down the aisle, everything got still, and I didn’t hear anything. I could only see Rachel. It was just perfect.”

The whole night went off without a hitch, the couple said, and they wouldn’t change a thing. It was a reflection of their lives together, but also the love of their family and friends.

“Everybody really came together,” Rachel said. “We felt really honored and blessed to have them be a part of our special day.” 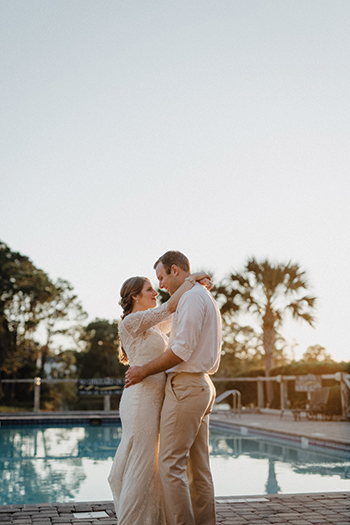