Threat of rain unable to spoil the big day

Kelly (Schuler) Hackman’s biggest wish for her wedding was that it take place outside. She and her groom, Dan Hackman, chose Colleton River Plantation Club — and the Lowcountry in general — for its breathtaking backdrops and gorgeous greens, which the Northern Kentucky natives were familiar with after vacationing here for many years.

But 2015 was a rainy year on Hilton Head, and the couple’s June 29 nuptials were nearly washed out. 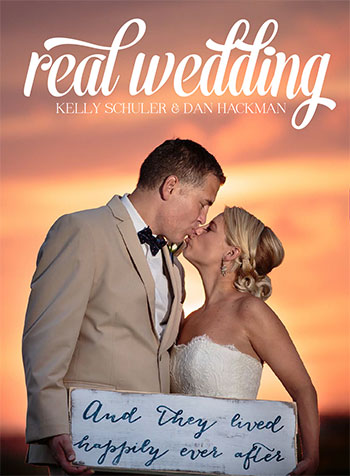 “I want each couple’s wedding to be exactly what they pictured in their minds. I work diligently to try and make that happen,” said Beth Baldwin, the couple’s wedding planner, of the stress over the day’s early afternoon precipitation forecast. “And any time I have to adjust for rain, it’s difficult, especially when the bride has her heart set on an outdoor wedding.”

With an eye on the ominous-looking sky, the staff at Colleton River set up an alternate indoor site for the ceremony, but the clouds held strong until after the 6 p.m. vows were said. Well, mostly.

“According to the guests, I think it sprinkled a bit, but my husband and I didn’t even notice,” Kelly Hackman said of the ceremony, which was presided over by the Rev. Joe Wadas.

“He was great, very comforting,” Dan Hackman said of Wadas, a Savannah-based wedding minister. “He was the guy that could turn a nervous situation into a relaxed time.” Part of Wadas’ job was to lead the Hackmans’ huge wedding party, which included seven bridesmaids, 10 groomsmen, seven flower girls and three ring bearers. 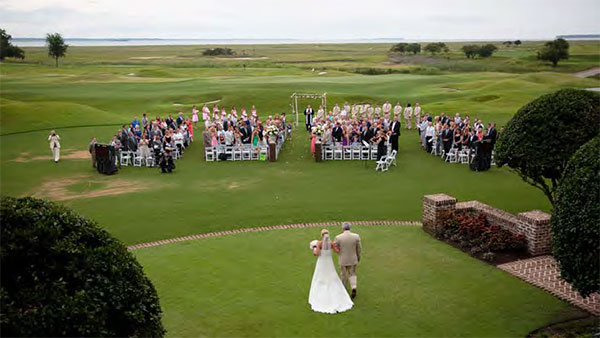 “Two of the little flower girls didn’t make it all the way down the aisle, but they all did great,” Kelly Hackman said. Photographers Scott and Melissa Hopkins of Hopkins Studios had the challenge of photographing the large wedding party once the nuptials were finished. 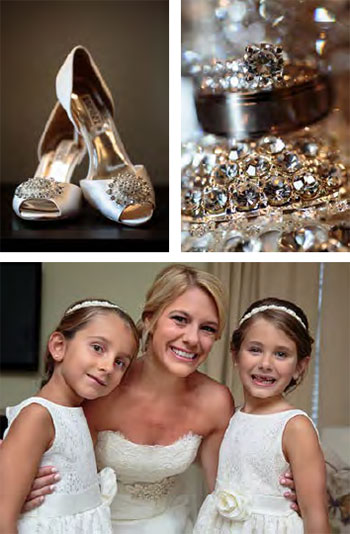 Meanwhile, their wedding guests were treated to a cocktail hour featuring spanakopita, mini crab cakes, apple crostini with walnuts and goat cheese, and a beautiful display of local and imported hand selected cheeses with artisan breads. The guests then dined on their choice of Vidalia crusted seared beef mignon, roasted chicken breast with shallot thyme jus, or seared swordfish medallion with a carrot-smoked bacon puree in the Nicklaus Clubhouse.

Eventually the threat of rain ceased and the couple snuck back outside for photos in front of a gorgeous Colleton River sunset, giving the bride the lasting images she’d always dreamed of having from her wedding day.

Then it was back inside to party the night away, with the help of The Rivertown Band from East Coast Entertainment. 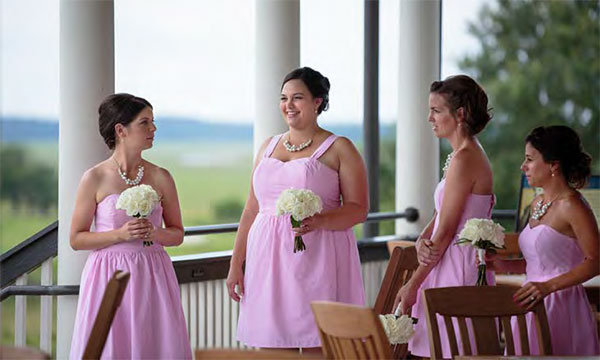 “The band was amazing. We wanted everyone to dance, everyone to have a great time, and the majority of the 200 guests stayed to the very last minute,” she said. “The dance floor was packed the whole night.”

There was also some Greek dancing, a nod to Kelly’s Greek Orthodox heritage that really set the night apart in Baldwin’s mind. 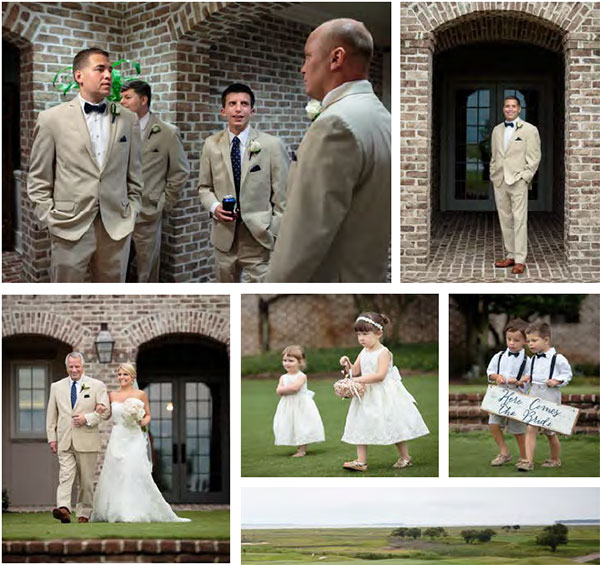 “It’s not often that I find a bride who really thinks through what her family heritage is,” she said. “Today’s brides are often inspired by Pinterest alone. I really encourage my brides to put a personal spin on their wedding. Kelly and Dan's wedding really felt like them.”

The cake, a classic, five-tiered masterpiece beautifully crafted by Minette Rushing, included two lilies on the top, thanks to Julie from Garden on the Square. The lilies were another personal touch that spoke to the couple’s unique relationship. 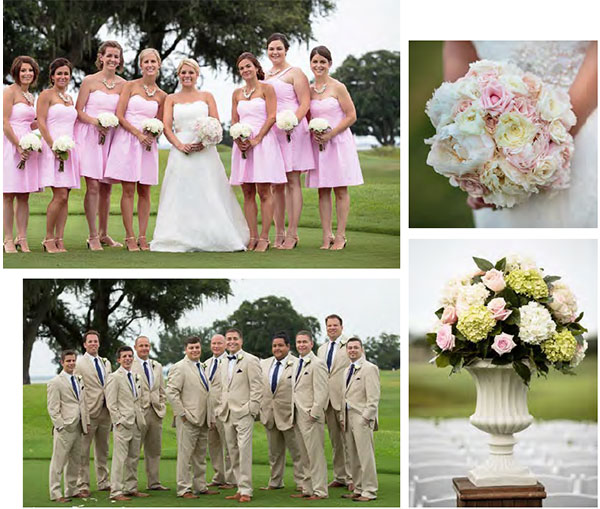 “We met on a blind date thanks to our two toddler nieces, Lilliana and Lilyann, who had met in their 3-year-old preschool class,” Kelly says. 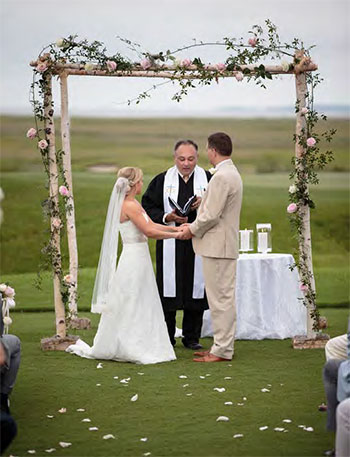 “My brother-in-law and Dan’s twin brother were talking at a preschool open house one night about their single relatives and set us up.” Because of the reference to the name "Lilly", Dan proposed to Kelly with two bouquets of lilies, and their lilly cake topper seemed like a perfect way to pay tribute to the start of their love story.

“Everybody brought their ‘A’ game,” Baldwin said of the vendors the Hackmans chose, from the Guardian Angels Sitting Service that babysat the 50 kids who attended the wedding, to Erica Pepper, Executive Chef Robert Wysong, CEC, and the talented staff at Colleton River, who helped to orchestrate a glorious celebration. 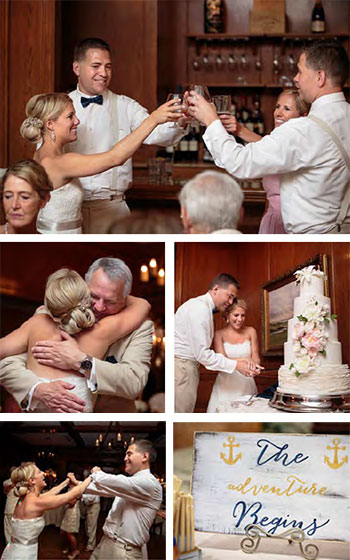 After an evening of dancing, Rivertown ended the night with a rendition of the Garth Brooks classic “Friends in Low Places,” which was a family favorite.

Watching the joy on the faces of those attending gave Baldwin a special sense of satisfaction.

“This couple was really over the moon for each other, and the two families were so happy for the couple to be married,” she said.

While that’s true of most weddings, the veteran wedding planner said there’s a subtle difference in the atmosphere when everyone is relaxed and in love with the idea of the two families becoming joined. “It’s in the air, it’s a tangible emotion,” she said. “Those are the weddings that I enjoy the most, when there’s that much feeling involved.”

Florist: Garden on the Square