TRANSFORM YOUR HEALTH WITH THESE TRENDING TREATMENTS

If you’re looking to transform your health, new technologies may make optimal wellness an easier goal to achieve. Cryotherapy, red light therapy and hyperbaric therapy are said to reduce inflammation, assist in healing and even fight illness. These new treatments are becoming widely available, but do they really live up to the hype?

CRYOTHERAPY IS NOT AN ICE BATH

Cryotherapy is used by doctors to freeze warts or lesions, but the application for non-medical spa treatments using freezing or near-freezing temperatures is fairly new.

Athletes commonly use whole-body cryotherapy to reduce inflammation and swelling. As science develops about the negative effects of inflammation on our bodies, spas and gyms are using this treatment as well.

Whole-body cryotherapy is said to reduce harmful body inflammation, burn calories and release an endorphin rush in just a few minutes. In the spa environment, visitors strip down to little clothing, perhaps protecting sensitive skin. They enter a cryochamber to sit or stand while their body reacts to subzero temperatures, somewhere below minus 100 degrees Celsius, according to the National Library of Medicine.

It’s believed that the cold temperatures cause an endorphin rush that combats anxiety and depression and causes the body to burn calories fighting to regulate temperature. This concept has spread through the spa environment to facials, estheticians using cold wands to stimulate new cell growth and reduce swelling.

Studies have shown that this therapy affects inflammation, circulation and body chemistry for athletic recovery, but not much information is available for proven results in the spa setting.

TURN ON THE RED LIGHT

The therapy works by stimulating cell turnover, causing an increased amount of circulation in the area treated by the lights. In cosmetic treatments it’s used to stimulate collagen, giving the enhanced appearance of firm and smooth skin.

Red-light therapy isn’t instant; sometimes it takes four months to show results. If you don’t want to head to the spa there are some devices for at-home use.

Wellness providers are regularly treating psoriasis, rosacea, acne and sun damage with red-light therapy as well as combatting hair loss. There are promising results for these applications of red-light therapy, with positive uses in treating chemotherapy-induced rashes and other difficult-to-treat skin conditions, according to the Journal of Clinical and Aesthetic Dermatology.

Just like other emerging treatments, hyperbaric oxygen therapy has crossed over to aesthetic use from wound care in the medical environment.

The medical therapy places users into an oxygen chamber to breathe pure oxygen at a higher-pressure level, allowing the concentration in the blood to increase for healing tissues. In the spa, it’s used to combat UV damage, wrinkles and aging skin. 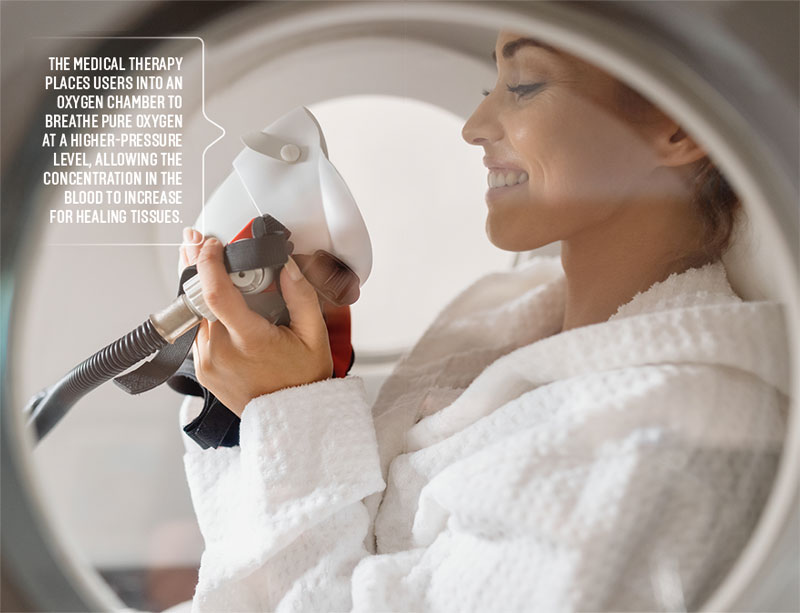 Wrinkles happen to all of us as our skin ages, but factors like poor nutrition, smoking or UV damage cause more damage than just getting older. Adding a higher level of oxygen to the skin increases blood flow, stimulating collagen and cell repair.

Spa technicians apply the oxygen directly to the skin using the increased pressure found in hyperbaric technology. Results for this treatment are positive, visibly restoring a youthful appearance.

The use of hyperbaric oxygen therapy reduces the visibility of wrinkles, according to Medical Gas Research.

It also is used to help healing in gangrene and infections in which tissues lack oxygen.

The application device is like an airbrush, the wand distributing oxygen and moisturizers to the skin. Most estheticians report instant improvements to the skin from an oxygen facial.

With all emerging treatments, it’s recommended to do research on the method used by the wellness center where you book your appointment. While each of these therapies are promising, they can vary in success. They are considered safe for use, but more research is needed to clarify the results and standardize the levels for best results.