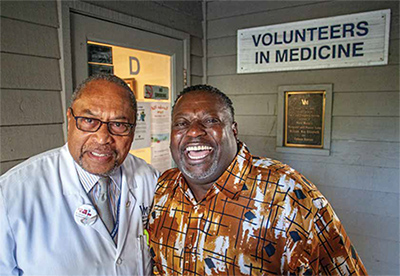 Musician Sterlin Covin knows first hand that nothing in life is guaranteed. For years, he performed around the world, ultimately making enough money to settle on Hilton Head Island so that he could spend more time with his young family.

But after the terrorist attacks of Sept. 11, 2001, when the entertainment industry found itself struggling, Covin was forced drastic financial moves — including dropping his health insurance. Seven years later, two freak accidents left him financially ruined, living in Section 8 housing in a wheelchair, and unknowingly facing the possibility of never being able to walk again.

Today, Covin, 60, credits the Volunteers in Medicine Clinic Hilton Head Island with getting him healthy enough to return to the local stage as a piano entertainer.

“What VIM went through to get my surgery done, man … that was the biggest blessing through God that could have ever been,” Covin said.

VIM, celebrating its 25th anniversary on Hilton Head, is the flagship for 88 other clinics around the county. Its 650 volunteers give more than 52,000 hours of service a year. The clinic, with nearly 30,000 patient visits annually, provides care in 23 medical specialties and five disease management clinics.

Covin’s journey with VIM started in 2008 when he tore his right quad muscles while roughhousing with an acquaintance outside a restaurant. Soon after, in a soft cast, and on crutches, Covin severely ripped the quad muscles in his other leg.

Uninsured, Covin turned to VIM, which he said did everything it could to help him. But he needed surgery. It took nearly a year for that to happen, when in 2009, VIM got Covin into the Medical University of South Carolina in Charleston.

“The blessing is that my surgery was done by the lead surgeon,” Covin said. That doctor told Colvin that he came to MUSC with the prospects of never walking again. A year later, Covin had relearned how to walk and was out of his wheelchair.

“I look at people in wheelchairs today, sometimes not being able to fit through a door … not being used to that life … my heart goes out to Volunteers In Medicine and the things that they have done and are doing,” Covin said.

“I look at people in wheelchairs today … remembering sometimes not being able to fit through a door…not being use to that life. There’s no preparing yourself. My heart goes out to Volunteers In Medicine and the things that they have done and are doing, “ Colvin said.

VIM was founded in 2003 by Dr. Jack McConnell, who wanted to help uninsured Hilton Head service and maintenance workers, said Ginger Allen, director of development. McConnell brought those who needed care together with care providers in what Allen calls the “Circle of Caring.”

“Those who are providing the care receive so much more joy in return than the recipients of that care,” she said.

With a $2.4 million annual budget, the clinic provides more than $13 million in of “quality care.” VIM, which funds its operations with grants and donations, said it saves local hospitals $2.5 million a year in “uncompensated emergency room visits.”

Covin, who finished rehab two years ago, considers VIM a lifesaver. The musician is a regular at Hilton Head venues and is currently performing in “Piano Men” in Savannah. He said he is on the road for four or five months a year, including performances Canada.

“You have so many people who have losses,” he said, reflecting on his trials. “For me, walking away from that house, that was something that I never thought I’d do. When I lost that, I pretty much lost everything. It is a blessing to have something like VIM because you just never know where you’ll end up.”

After 25th years of close to 30,000 patient visits a year, Volunteers in Medicine Clinic Hilton Head Island has become the flagship model for 88 other VIM clinics across the country, providing care in 23 medical specialties and five disease management clinics. More than 70 percent of its patients work or have family who do.

To be eligible for care: