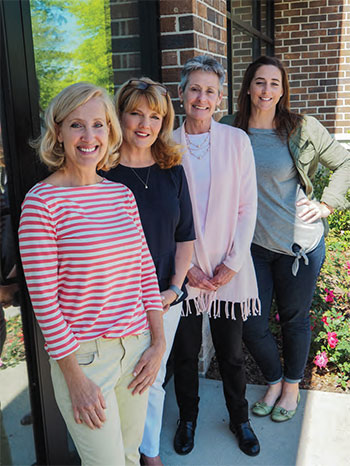 According to a recent report from Mental Health America, 18 percent of American adults are dealing with mental health conditions ranging from minor anxiety to severe and chronic mental disease. Luckily, people in the Lowcountry facing a mental health diagnosis have Island House as a resource.

“Mental illness doesn’t mean you have to hide in a corner,” said Jessica Bender, the new executive director of Island House. “We can teach you the skills you need to live your life. And if we can’t help, we’ll send you to someone who can.”

Island House offers a morning class focused on life skills like cooking, shopping, and cleaning. Then, in the afternoon, patients work on more intangible topics, like communication skills, medication compliance, self-esteem, money management and reducing stigma. Learning these skills helps patients work toward independent living. Many of the group’s patients live alone or in unstable family situations, and going to Island House is their only interaction with other people.

However, the past few years haven’t been easy on the organization. Cuts in state Medicaid reimbursement rates for mental health services put Island House in dire financial trouble.

MENTAL ILLNESS DOESN’T MEAN YOU HAVE TO HIDE IN A CORNER.

“They had to make some serious, hard decisions to keep doors open,” said Bender.

Almost all of the group’s patients are on Medicaid; while there are a few self-pay patients, the cost of treatment often is prohibitive. When Bender started with the organization — initially as an intern — the group was still struggling with the effects of the budget cuts, decided to sell its building and vehicles and even forego salaries. In addition to Bender, who joined the staff on March 1, Island House employs a program director, Athena Whitlow; a licensed professional counselor, Jeanne Thomas; and a registered nurse, Jennifer Goeman. All four employees are part-time.

It seems the cuts were enough to carry the organization through.

“We made it,” Bender said. “The crisis is over, and we want to re-introduce our organization to the community.”

Island House has relocated to Bluffton, brought in new leadership, and started a scholarship program to help people afford treatment. The group is currently getting by without company vehicles; if patients don’t have transportation to the office, they must rely on Medicaid-reimbursed transport to the facility. The group also no longer offers field trips for patients. But Bender said the service is still invaluable.

“Isolation is a risk factor for this population because it can snowball into other issues, like medicine noncompliance and poor sleep/wake patterns,” she said.

When people who have severe persistent mental illnesses don’t receive care, they often end up in places like the hospital or jail, or they commit suicide, Bender said. People with mental illness also face stigma.

“This segment of the population is typically the first to be ignored,” she said. Bender’s internship at Island House helped open her eyes to the issue, and when an opportunity to take a permanent position arose, she wanted to help. “The patients have problems to overcome, but they are creative and funny people.”

For more information about Island House, call 843-757-8650 or go to www.mhaislandhouse.com.