Fundraiser officials often talk about the difficulty of building buzz and momentum for annual events. Don’t tell that to Laura Morgan.

As the Bluffton-based founder of the LoCo Motion breast cancer challenge will tell you, the 1,600 participants and Pledgers of the Pink are as dedicated as ever heading into the event’s fifth year.

“I live for the buzz and the momentum and the excitement around LoCo Motion,” she said. “The people and their passion have made this event strong, and we are stronger than ever. Fighting cancer together, wearing pink together, acting silly, building up calluses and laughing a lot. It’s what it’s all about. But we have a number of exciting additions this year.” 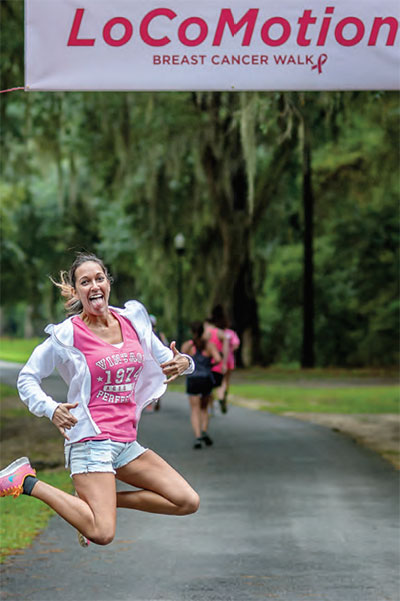 The three-island, 30-mile walk, set for Sept. 22-25, is reaching far beyond the South Carolina Lowcountry this year. Morgan said the organization has become an official partner of the American Cancer Society to create a virtual event.

The American Cancer Society has designated the last Saturday of September as National LoCoMotion Day, so folks far beyond Hilton Head can join in on pledging the pink.

Participants across the world can go on to dothelocomotion.org and sign up for the 10-mile virtual walk Sept. 24. For a $95 registration fee, walkers will get a swag pack mailed to them that includes a medal, official LoCo t-shirt, official race bib, pink LoCo shoelaces, a cinch pack and access to a members-only site packed with LoCo-approved workouts to keep fit long beyond race day.

“We have had people come from all over the world every year, from 46 states and eight countries,” Morgan said. “Now, we can truly bring this revolution to cancer survivors and supporters everywhere far beyond the 1,600 people doing the in-person walk. Wherever you are on the 24th, you can do your 10 miles.”

Even more important, $80 of the registration goes to Lowcountry nonprofit groups that provide free breast cancer treatment for those in need. How far does that $80 go? In comparison, $50 pays for a mammogram and $100 funds a biopsy. So that $80 could be life-saving.

“Next year, with the American Cancer Society behind us, pledgers will be able to designate their money to go to local cancer research and support organizations wherever they live,” Morgan said.

One of the higher-profile promoters of the new virtual event is one of Morgan’s favorite people on Earth. Anyone who knows Morgan knows she bleeds Clemson Tigers orange, so when Clemson head football coach Dabo Swinney agreed to do a pitch, it was a huge boost to the event.

“He’s starring in a video for us, something funny and cheesy that has viral all over it where is asking everyone to ‘Pledge the Pink,’” she said. “We’d like to eventually turn this into a competition between the schools, where Dabo challenges the Gamecocks and coaches all around the ACC to step up and spread the word.”

Clemson plays on the Thursday before the event this year, but Morgan envisions a game-day tailgate as the perfect virtual LoCoMotion event.

“You can do your 10 miles just walking the campus and walking from tent to tent during the tailgate,” she said.

Another new component this year will involve an attempt to set a Guinness World Record.

For those who can’t run or walk in the event but still want to donate, you can help in the attempt. Fancy the Flamingo has been the unofficial event cheerleader for years, greeting racers as they cross the finish line. This year, Fancy has been birdnapped by a group of bandits demanding $50,000 ransom — and that the money be donated for free mammograms.

So Morgan is asking for 1,000 people to donate $50 apiece, with each donation paying for one mammogram. Each donation not only gets Fancy closer to freedom, but Morgan will also add one plastic pink flamingo to the booty. Guinness officials will be coming to the Lowcountry to validate the world record for the most pink flamingos gathered in one place.

“People are loving the fun behind it, and it’s an easy way for folks to contribute and they can say they were helped beat cancer and helped set a world record,” Morgan said.

And LoCo officials are making the three-island event more special than ever. Beyond the normal swag, participants will get daily medals for finishing each leg on Callawassie, Daufuskie and Hilton Head islands. And the “three-day-ers” will get a special race bib and the ultimate bling, a Triple Island Medal.

“You never want an event to get stagnant, and we just don’t do stagnant. These folks who are giving so much of themselves are going to be blinged out,” Morgan said.

An event that began with local aspirations to help support those battling breast cancer is now spawning a national movement. Morgan hopes to donate a total of $150,000 this year to local organizations. She believes the virtual component will help grow that pledge into a seven-figure donation in the next five years.

“People say that’s a lofty goal, but we have the plan and we’re building support every day,” she said. “And hey, if your dreams don’t scare you, you’re not dreaming big enough.”

Friends with big platforms are helping spread the word in getting folks to Pledge the Pink. Fox News host and Palmetto Bluff resident Dana Perino is just one of many helping to get the word out, both on television and with her social media followers.

“Dana, Dabo, Haig Point … there’s just too many folks to thank here,” Morgan said. “The doors are opening and people are speechless and picking their jaws up off the floor when we tell them our plans. They’re saying, ‘Why haven’t we thought of this?’ And I tell them, ‘It’s magic inspired by the South Carolina Lowcountry.’”

To join this year’s event or for more information on becoming a donor, visit www.pledgethepink.com or www.dothelocomotion.org.

What: a three-day, 30-mile walk spread across three Lowcountry islands to raise money and awareness for breast cancer support and research. The race begins with a packet pickup party and continues with daily waterfront parties at each of the finish lines, complete with free food, games and entertainment.

To join: Advance registration fee is $150 for one day, $250 for two days and $300 for three days; virtual racers who can’t be at the event can do a one-day, 10-mile walk for a $95 registration fee. All money will be donated to local breast cancer support organizations.