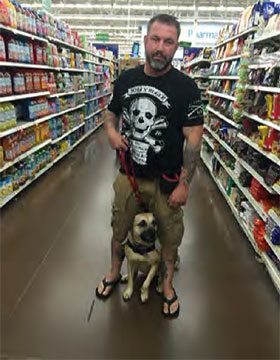 Psychiatric service dogs can be powerful allies for recent veterans recovering from the traumatic effects of war.

“There isn't enough medicine in the world to make myself or other veterans feel as safe as we do with our four-legged battle buddies,” said veteran Zachary Pennington, who served in the wars in Afghanistan and Iraq and is recovering from post-traumatic stress disorder (PTSD). “Sometimes human beings can't heal what dogs can.”

Veterans suffering from PTSD often suffer extreme anxiety in situations in which they perceive the environment to be uncomfortable or unsafe.

“My service dog and I were at Walmart,” Pennington said, “when a man who was clearly inebriated — you could smell him a mile away — approached us. He tried to pet Ella and bombarded me with questions. I felt uncomfortable and told Ella, ‘Block!’ She immediately stood horizontal, blocking the man. But he kept trying to go around her to get to me, so I shouted, ‘Watch him!’and Ella started barking aggressively. He didn't bother us again. Just to clarify, that isn’t an everyday command — emergencies only.”

Veterans Affairs has a few different approachesto treat PTSD, including antidepressants and anti-anxiety medications, cognitive processing therapy, and prolonged exposure therapy. Edna Foa, a professor of clinical psychology at the University of Pennsylvania, developed exposure therapy in the 1980s.

According to Foa, traumatic experiences like an IED ambush can “over teach” the mind of the survivor, allowing subconscious fears to dictate behaviors. Military therapists guide veterans to remember and engage with the trauma in a safe environment. By retelling the story, the hope is that the survivor’s turmoil will diminish.

A recent study of 204,000 veterans published in The Journal of the American Psychiatric Associationdiscovered about two-thirds of Iraq and Afghanistan veterans quit VA therapy for PTSD within a year, usually before finishing the treatment.

“Being blown up, seeing someone blown up or smelling burning flesh from an IED attack — these are the kinds of terrors that haunt veterans and make the transition back to civilian life tough,” said Heather Fall, a 10-year veteran of the Navy and the liaison officer for Shepherds for Lost Sheep, a nonprofit group that trains service dogs to assist recent veterans with PTSD and traumatic brain injuries.

Service dogs can help people do things they have been avoiding because of PTSD, such as standing close to a stranger or going into a building without scanning it for danger first. The dogs provide a bridge back to civilian society from the sometimes-brutal hardships of war.

“We follow our vets throughout the life of the dog and when the dogs are ready to retire, our veterans automatically get a new dog. All of our services are free to veterans,” Fall said.

Service dogs also can lay on or lean against veterans to calm them during times of stress, create space or lead a veteran to a quieter place in a crowded public place, and even wake up a veteran suffering from a night terror by turning on the lights.

Because the veteran depends on the service dog's help, the dogs can enter most public places, including restaurants, grocery stores and airplanes.

PTSD often affects short-term memory. Service dogs can be trained to know the specific time of day when a veteran should take a medication and will sit in front of him until he takes it.

“Our dogs are capable of doing almost anything, even taking clothes out of the dryer, pulling off socks or tugging on a shirt to help a veteran dress,” Fall said. “You wouldn’t go to the store without your wheelchair. Our dogs help veterans live a normal life and come to terms with it.”

Not All Wounds Are Visible

Pennington joined the U.S. Navy in 1998 as a cryptologic technician.

“I didn’t know what my job fully entailed. My recruiter didn't even know. He just told me that it was ‘secret squirrel stuff,’” he said.

“And I went out on combat patrols. You could never trust anyone out on the town. When you heard a pop or crack, or discovered a pile of trash, you wondered. You wondered if the pile of trash was an IED. And your body, your body and especially your mind, can only take so much of that constant hypervigilance.”

By the end of his service in the military, Pennington described feeling angry and agitated. Back home, he would walk around his house with a loaded pistol, checking doors repeatedly. He had insomnia and couldn’t sleep in a bed. He slept outside. He received therapy and medication from the VA, but still felt anger and anxiety and woke up with dread or worse, a night terror.

Many soldiers have difficulty letting go of battle rage, according to April Gerlock, a lead investigator for the VA. When they return home, this anger sometimes channels into heavy drinking, drugs or violence. Combat veterans are responsible for almost 21 percent of domestic violence and 20 percent of suicides nationwide, both linked to the development of PTSD.

Beginning in 2005, suicide rates among recent veterans with PTSD skyrocketed. Top leaders in the Pentagon have acknowledged the high rate of suicide among veterans and spent heavily to try and reduce it through new research, programs and therapies. But basic questions about who is most at risk and how best to help them are still unanswered.

Pennington dealt with PTSD for years before the “life-changing event” of discovering dog medicine.

“You’re rewired when you’re in the military,” said Pennington. “With the help of Ella, I’m no longer hypervigilant. I want to use my painful experience to help other vets. I know the value of dog medicine and want to spread it.”

A new VA study is underway to evaluate how service dogs may be a viable alternative to aid soldiers recovering from PTSD.

“One thing is for sure — service dogs are the closet things to a life raft. They are much more than a pet,” Pennington said.

For more information on service dogs aiding vets, including how to donate to the nonprofit Shepherds for the Lost Sheep, go to www.shepherdsforlostsheepinc.org.