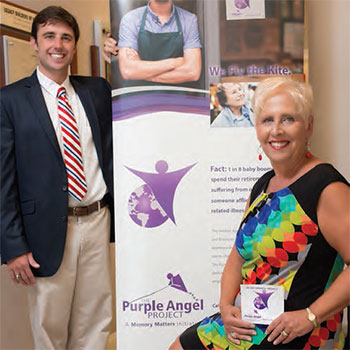 Memory Matters is a nonprofit organization that ensures that even those dealing with memory loss feel safe in the community going about their everyday lives. As part of its efforts, it is working with area businesses and organizations to spread awareness.

The nonprofit group launched its Purple Angel Project in January, and has already trained 650 employees at more than 30 Hilton Head Island businesses to recognize the signs of dementia, as well as how to help someone who is suffering from dementia and memory loss — skills that will be invaluable on Hilton Head, where the latest U.S. Census showed that 68 percent of island residents are older than 65.

Aging is a concern not just on Hilton Head, but also around the country. Baby boomers are the largest segment of the U.S. population, and about one in eight people will develop Alzheimer’s disease. As a community, we should rise to the challenge and prepare now for the future.

Those with dementia are not able to do activities that they once enjoyed. Lacking confidence, they withdraw from their communities and tend to spend most of their time at home. People with dementia often are wary of the attitude and reaction of others; 35 percent of people with dementia said they only go out once a week or less, and 10 percent said once a month or less.

People with dementia face psychological, emotional and physical barriers such as worry, lack of confidence, feeling lost, mobility issues, physical health and not wanting to be a burden on others.

By training its employees to recognize the needs of these residents, businesses will be better able serve the community. If those with dementia feel welcomed and supported by the community, they will in turn venture out again by eating out, shopping and more — all of which are good for the economy and our community.

For more information about the Purple Angel Project, go to www.purpleangelproject.org or call Memory Matters at 843-842-6688.