Kerry Pollock walks on stage at Comedy Magic Cabaret on Hilton Head Island like he built the place — because he did. Pollock’s passion for both comedy and magic lured him away from his original career as an engineer, one gig at a time.

Pollock is gifted at crafting jokes and illusions — and the settings where performers present them. His half-bowl, 88-seat club in the South Island Square shopping center feels like a classic jazz club; there’s not a bad seat in the house. Corporate events, private parties and celebrations of life have taken place in this homey, intimate space. In addition to setting the stage for laughter and amazement on Hilton Head, Pollock has built stages and performance spaces for others in the entertainment industry. 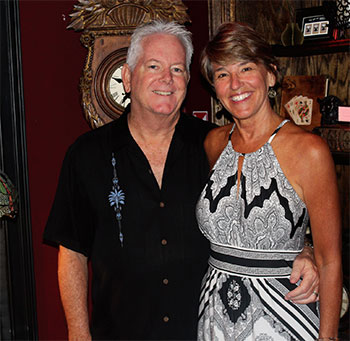 Audiences at Comedy Magic Cabaret have grown about 20% since the club opened, as word spread across the Lowcountry and beyond about Pollock’s “Funny Not Filthy” entertainment. Much of the credit for the club’s success belongs to his wife, Kelly, who is a breath of fresh air, tirelessly working the front and back of the house. Many guests become repeat customers — and close friends of the couple.

Friends and fans are quick to sing Pollock’s praises. Among them are Rich and Janice Ross, who have also seen him perform at The Magic Castle nightclub in Hollywood.

“The other comics told us that no one interacts with an audience better than Kerry,” Rich Ross said.

As Hilton Head guests enjoy the show, they can also order food and drinks — Comedy Magic Cabaret serves simple Southern cuisine with a twist: pork and chicken sliders, paninis, and a variety of desserts. Signature cocktails include The Daufuskie Hurricane and Kelly’s Favorite. The menu also includes a wide selection of beer, wine and soft drinks.

The Pollocks recently upped the magic with a new addition to the club, an intimate “Backstage” Close-Up magic show seating only 12-16 guests for a unique personal experience. They will also be offering the same aboard their 61’ yacht “MAGIC”. An optional upgrade includes a pre-show dolphin cruise with hosts Kerry and Kelly. 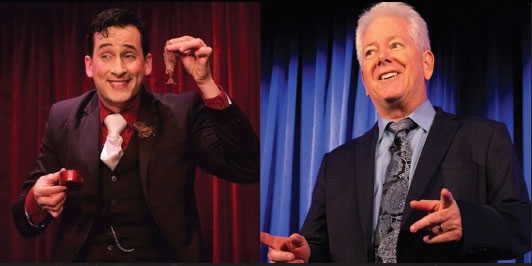 Comedy Magic Cabaret is located in South Island Square, 843 William Hilton Parkway, Hilton Head Island. When facing the shopping center, Lucky Rooster Kitchen + Bar is in the front left corner and Comedy Magic Cabaret is in the back right. Doors open at 7:15 p.m. and shows start at 8 p.m.; for just a few extra dollars comedy fans can sit a little closer to the stage to increase their chances of becoming “volunteers” during a performance.