A FAMILY TRADITION OF EXCELLENCE 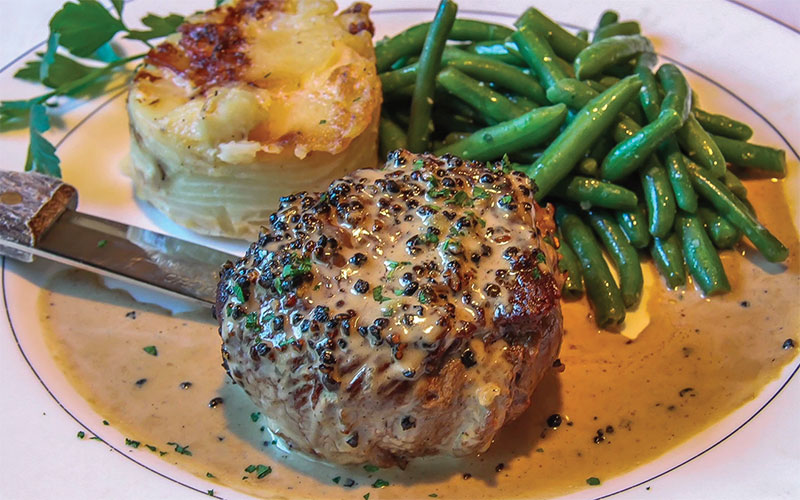 Crane’s Tavern and Steakhouse on Hilton Head Island has a pedigree that goes back for more than a century. Frank Crane, an immigrant from Ireland, founded Crane’s Tavern in Philadelphia in 1908 and ran it until forced to close during Prohibition.

After the restaurant reopened in 1933, his sons and a grandson continued to operate the tavern into the 1970s. His son Hank worked at the original tavern until 1969, when he opened a Crane’s Tavern north of Philadelphia, then bought and renamed the Surf City Hotel on Long Beach Island, N.J.

In April 1999, Hank and his daughter Beth-Anne Crane, great-granddaughter of the founder, opened the restaurant on Hilton Head. More than two decades later it remains a go-to destination for lovers of steak, seafood and fine wines.

The extensive selection of wines, both domestic and international, received an Award of Excellence from Wine Spectator magazine. With its crisp white tablecloths, old- English bar and rich, warm, heart-of-pine floors, the tavern is known for its cozy, comfortable, casual atmosphere and outstanding service.

“It is our desire to offer our customers an experience in prime,” say the owners.

Crane’s has a children’s menu. Dinner served nightly from 5-10 p.m., including a multi-course early-dining menu from 5-5:45 p.m.